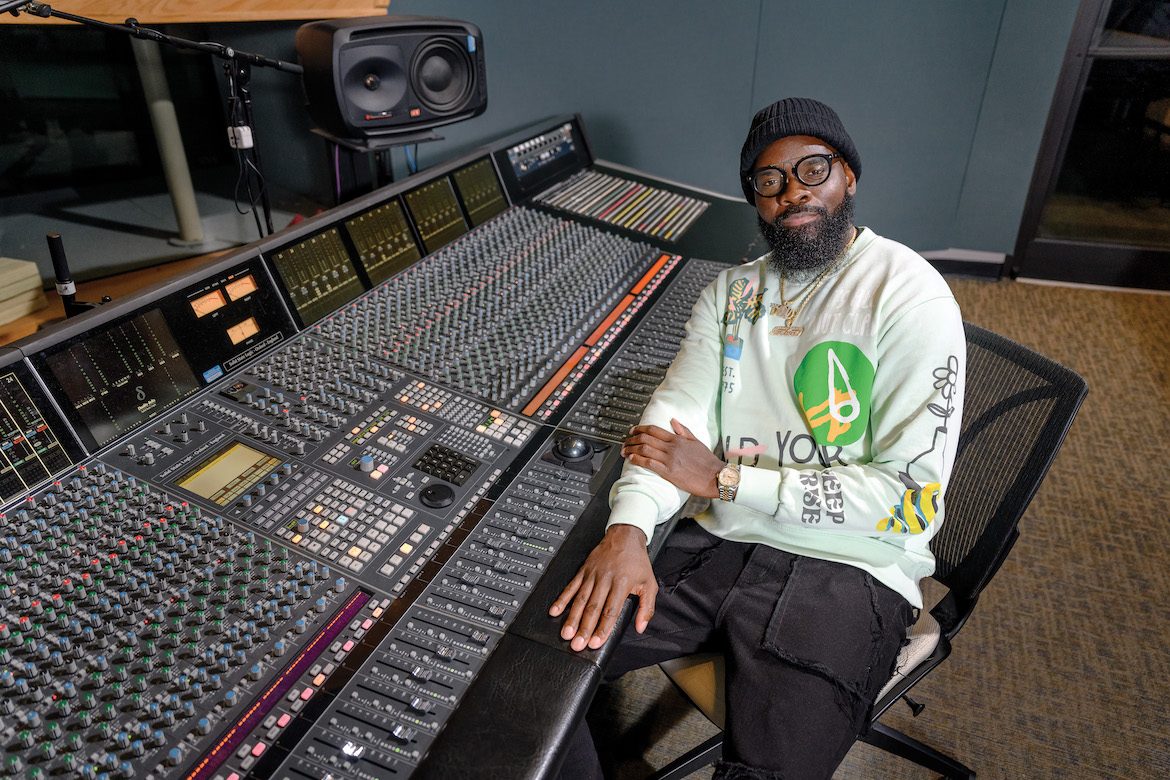 Known by the rap moniker “Street Symphony,” under which he won Grammy, Dove, and Stellar awards, producer-songwriter Torrance Esmond (’03) introduces himself lately by his birth name, and as the founder of Track or Die, a production and music publishing company.

Esmond is also an adjunct faculty member who teaches Hip-Hop/R&B Songwriting in MTSU’s storied Recording Industry program, where he earned his degree.

“The music business has changed a lot since I was in school,” Esmond said. “Nowadays, everybody has a laptop, a mic, and an interface to record. You don’t have to go to the studio to get your ideas out anymore. There’s a lot more diversity and interest in being diverse. And the students today are more diversified in terms of music.”

Esmond knows a thing or two about finding strength in diversity.

“I grew up with Memphis blues and Nashville country. I listened to rap and Guns N’ Roses,” he said, then pauses and sings a few lines from Garth Brooks’ ballad “The Dance.” “My tastes are so diverse—I try to master the art of being simple but not basic.”

Esmond, who was born in Memphis and graduated from Nashville’s Hume-Fogg Academic High School, accepted an academic scholarship to MTSU. Once on campus, he joined the Kappa Alpha Psi fraternity. His sophomore year proved to be pivotal—life-changing, even. 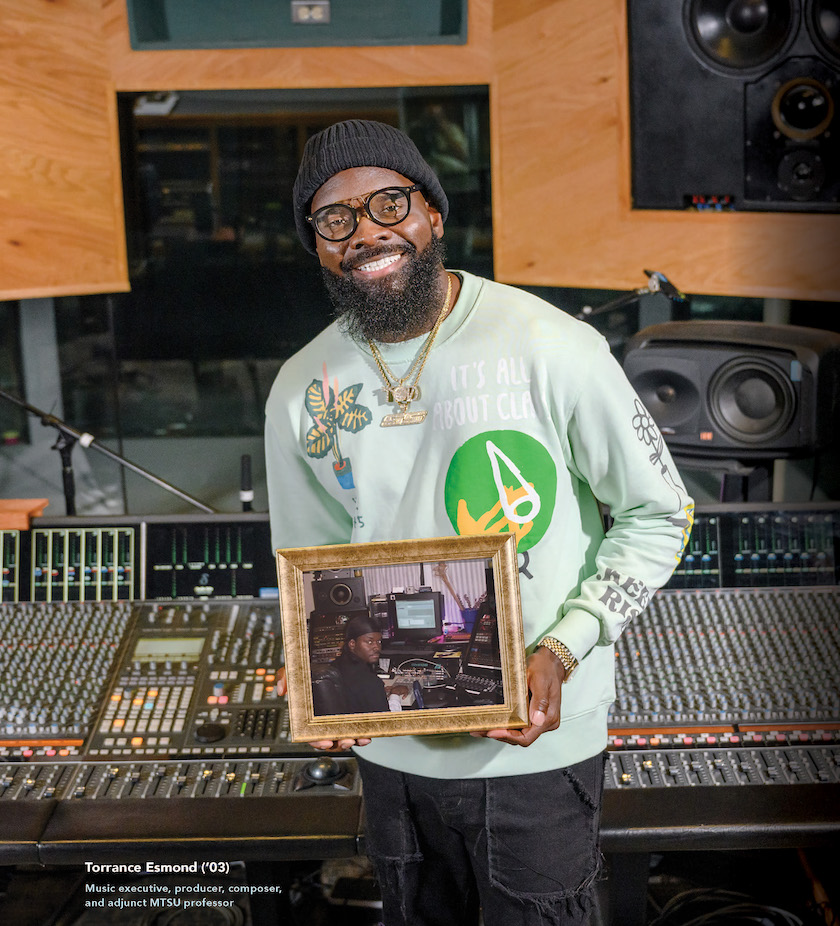 He entered MTSU as an Engineering Technology major (“not audio-related”) before changing his major to Recording Industry. He has rap behemoths Big Boi and André 3000, the Grammy-winning duo known as Outkast, to thank for that. High school friends invited him to Florida A&M’s Kappa Luau, where Outkast was touring off of the success of double-platinum album Aquemini.

“That show was just so dynamic, I knew then and there that was what I wanted to do for sure,” Esmond said. “That concert changed everything.”

After graduating, Esmond worked with massive rap artists in Atlanta, including Ludacris, and hip-hop artists in Houston, while his MTSU fraternity brother Lecrae Moore was doing hip-hop gospel and Christian rap. Esmond eventually took over management and A&R responsibilities of Lecrae’s label, Reach Records. Together they won multiple Grammy, Dove, and Stellar awards.

But the music industry can be quick to pigeonhole talent, and the risk was real that Esmond’s professional pursuits would be limited to Christian music—a smaller market.

Having proved himself as a music executive, he launched Track or Die, which works with many top artists. The company produced Nipsey Hussle’s “Hussle & Motivate,” a song former first lady Michelle Obama included on her 2020 workout playlist.

At MTSU, Esmond brings such heavy-hitting professionals into his classroom for the benefit of the students.

“You hear people talk about networking at college. It’s easy to think that these are just your friends,” Esmond said. “But 10 or 15 years later, you see them doing things, and you’re able to tap back into that network.”

For instance, MTSU friend Aeshia DeVore Branch is married to Al Branch, who was general manager of Jay-Z’s Roc-A-Fella Records and was pivotal to the careers of Kanye, Nicki Minaj, and Lil Wayne. He was a 2020 guest in Esmond’s class.

There’s a bit of a folklore—if not superstition—that a new success can occur shortly after a guest speaker’s visit to Esmond’s class, too. Country music’s Breland charted a song within weeks, and other guests benefited from projects by Cardi B and Chris Brown.

“Probably the biggest songwriter we’ve had was Sean Garrett, who has written for Beyonce and Destiny’s Child—he also wrote Usher’s biggest hit, ‘Yeah!’ ” Esmond said.  “. . . He was in the studio with Usher at the time.”

“I took Lanie Gardner under my wing in 2019,” he said. “She was a standout student, and she ended up going viral for a video of her covering Fleetwood Mac’s ‘Dreams’ and eventually got signed to RCA Records.”

“It was a scholarship that helped me get through college,” he said. “I thought it would be a great way to give back to the university that gave to me.” 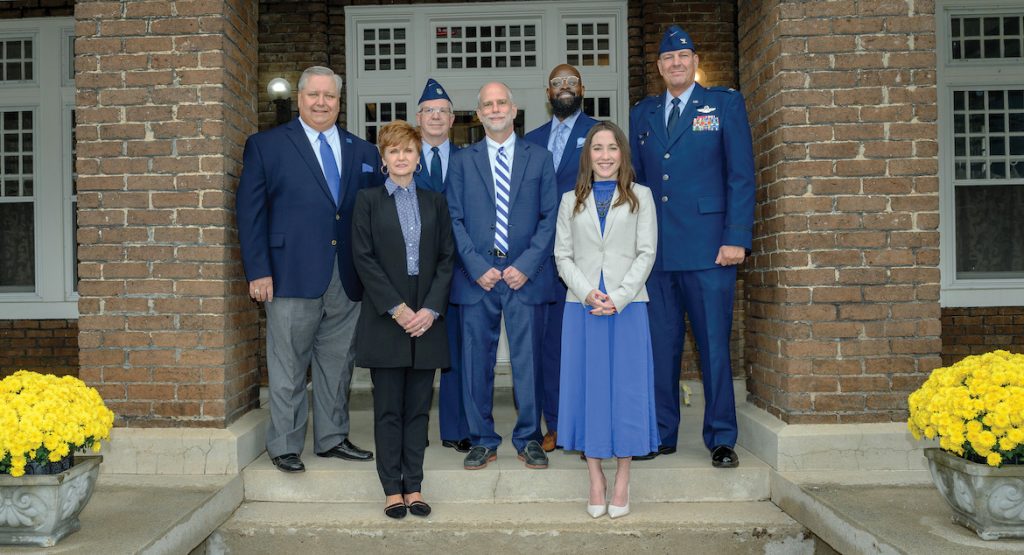