MTSU is No. 1 in the state in transfer student enrollment and is the top institution using the “reverse transfer” process for student degrees. Chattanooga State is one of MTSU’s key transfer feeder schools. 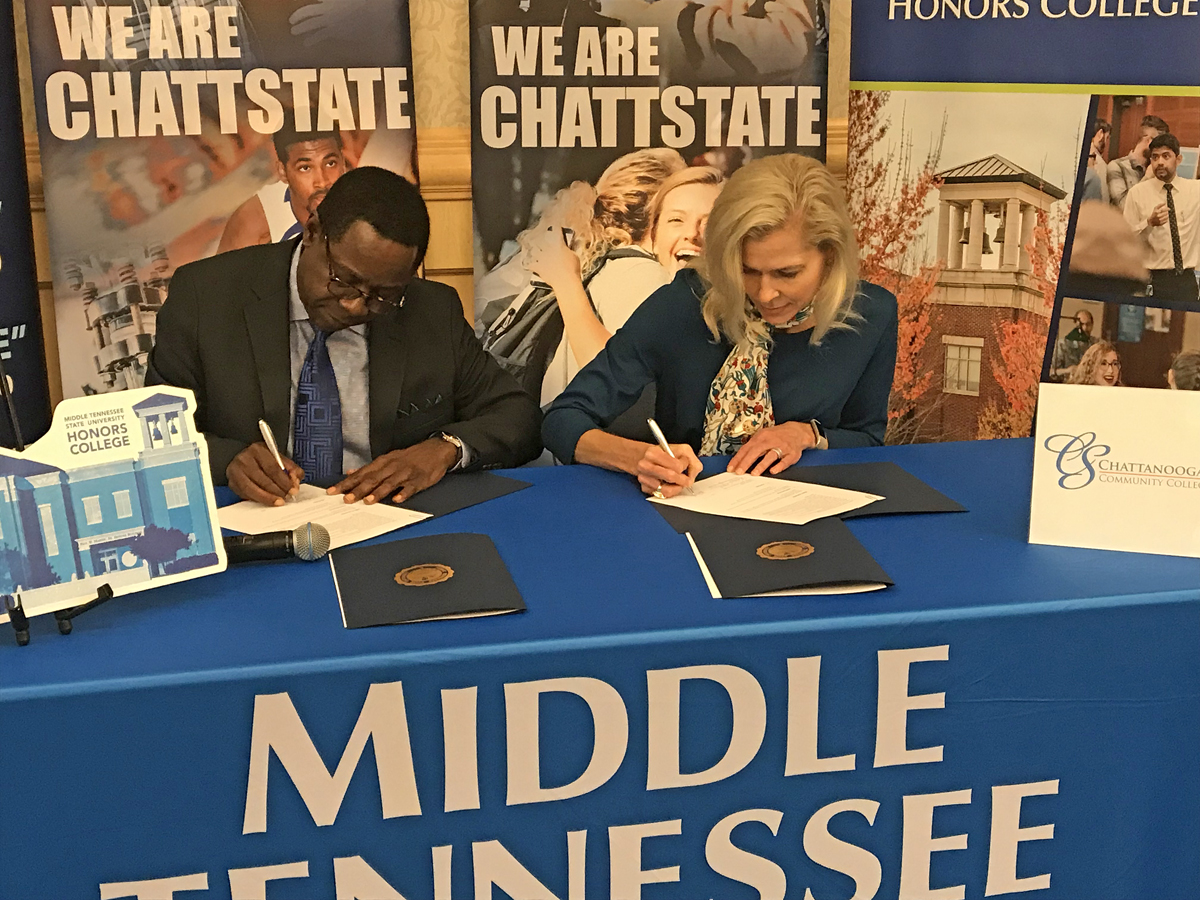 Chattanooga State’s main campus is in Chattanooga; it also has two satellite campuses and offers 26 online courses. It’s the eighth community college to join the MTSU Promise program, where the university pledges support to help students at partner schools complete their associate degrees, then move forward in seeking a four-year degree.

Ashford and McPhee also signed a memorandum of understanding between the college’s Global Scholars Honors Program, which has 250 students presently, and MTSU’s University Honors College.

“We are pleased with the partnership, but we’re taking it to another level,” McPhee said. “They can transfer from Chattanooga State hassle-free. They have a long, tradition of sending outstanding students to MTSU. … This is an example of collaboration and partnerships of public institutions working toward the betterment of citizens of the state.”

Ashford said the partnership “is all about an amazing opportunity for our Chattanooga State students. There will be no hassles, it’s affordable … and they will have a seamless transition to MTSU.”

The “promise” agreement calls for Chattanooga State to share directory information of its students with MTSU so they’re included in tailored communications that help their planning for a bachelor’s degree after they successfully complete an associate degree.

The agreement also Chattanooga State students who participate in the MTSU Promise will sign a “reverse transfer” agreement, meaning if they fail to complete their associate degrees before they transfer, they will automatically receive an associate degree from Southwest once they’ve completed sufficient credits at MTSU.

Through its existing Guaranteed Transfer Scholarship Program, MTSU will provide $3,000 per year in aid for two years, or a maximum of four semesters, for qualifying Chattanooga State students who transfer to MTSU and achieve a 3.0 GPA.

Students transferring to MTSU won’t be eligible to apply for the Guaranteed Transfer Scholarship until they complete 45 credit hours at Chattanooga State.

Dr. Deb Sells, MTSU’s vice president for student affairs and vice provost for enrollment and academic services, said the MTSU Promise is a program where Chattanooga State and other community college students can consider their bachelor’s degree plans even as they begin their associate degree. 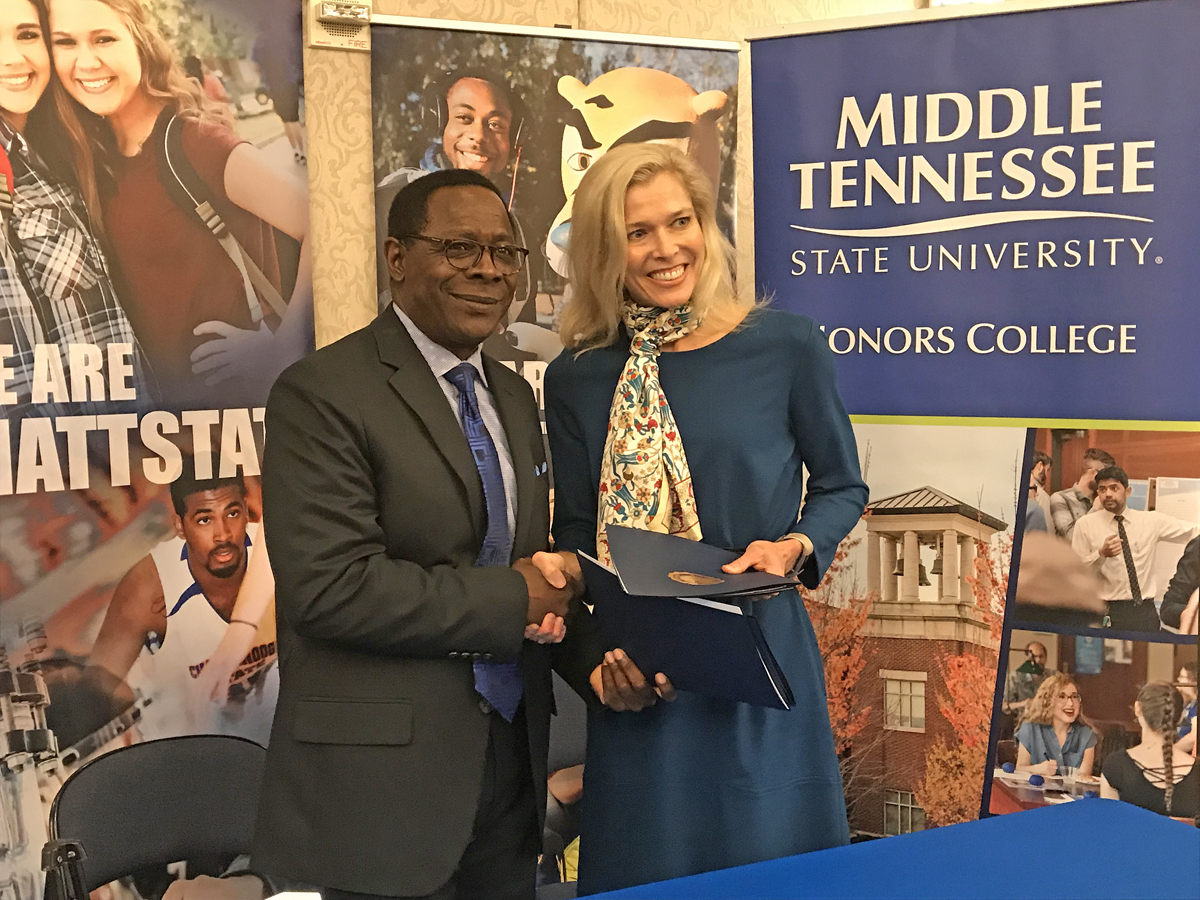 Presidents Sidney A. McPhee, left, of MTSU and Rebecca Ashford of Chattanooga State shake hands after signing an “MTSU Promise” to Chattanooga State to ease the transition from college to university Tuesday, Oct. 29, at the Chattanooga Convention Center. The presidents also signed a new partnership for the institutions’ honors programs. Through its existing Guaranteed Transfer Scholarship Program, MTSU will provide $3,000 per year in aid for two years, or a maximum of four semesters, for qualifying Chattanooga State students who transfer to MTSU and achieve a 3.0 GPA. (MTSU photo by Randy Weiler)

Sells said MTSU will also assure the students that if they complete 60 credits with a 3.0 GPA at Chattanooga State, they’ll be guaranteed admission and a scholarship to attend MTSU for their last two years of study.

Regarding the Honors Program agreement, Amanda Bennett, director of the Chattanooga State honors program, said the new pact “gives our students assurance the credits they’ve earned at Chattanooga State will go with them to MTSU.” The community college had only a standing “informal agreement” with the MTSU Honors College before this new signing.

Chattanooga State’s other campuses are in Dayton and Kimball. To learn more about its programs, visit www.chattanoogastate.edu. 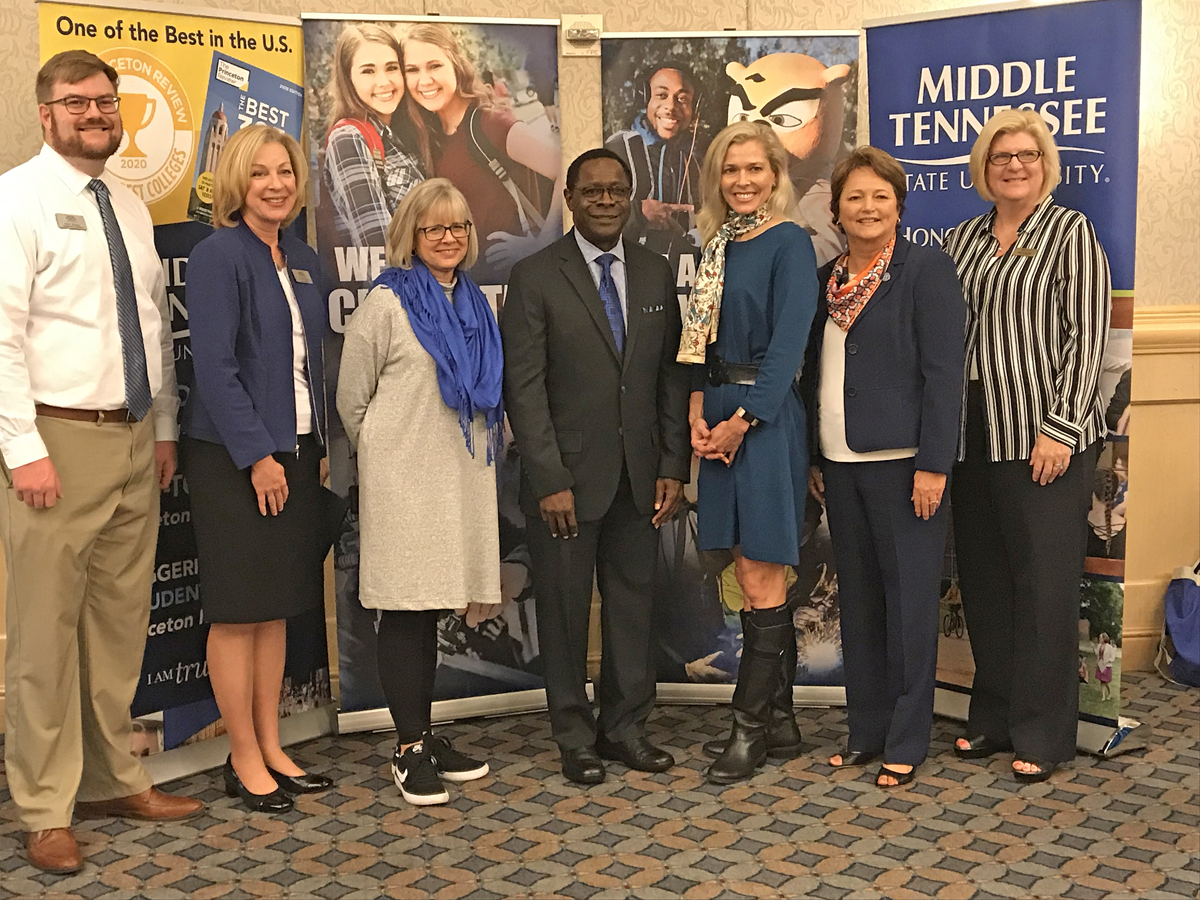