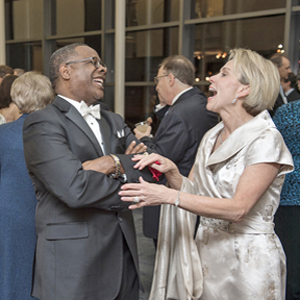 Friends and colleagues joined together Friday, Jan. 24, to honor MTSU President Sidney A. McPhee and his wife, Elizabeth McPhee, at The City Schools Foundation’s seventh annual Excellence in Education Celebration.

MTSU President Sidney A. McPhee, second from right, shares a laugh with guest Lynn Lien, right, as Elizabeth McPhee, MTSU first lady, far left, talks with other guests during the City Schools Foundation reception for the McPhees held Friday, Jan. 24, at the Kennon Hall of Fame at MTSU. The McPhees were the honorees for the seventh annual Excellence in Education Celebration, which was held later that night at the Stones River Country Club. (MTSU photos by Andy Heidt)

“Dr. Sidney and Elizabeth McPhee are strong leaders in education and our community. We are thrilled to have this opportunity to honor their service,” Doug Young, chairman of The City Schools Foundation, said.

A pre-event party for sponsors was held at the Kennon Sports Hall of Fame.

John Pittard Elementary, home of the Pittard Lions, was highlighted as the featured school for the celebration.

The 2014 celebration was an enjoyable evening full of laughter and good will, organizers said. Storyteller Dan Whittle entertain guests with homespun humor in the spirit of education.

Money raised by The City Schools Foundation benefits Murfreesboro City Schools’ pre-K through sixth grade students. The foundation’s goals are to boost the school system’s financial support in the areas of science and math, academic competition and excellence among students, and to address financial parity in all schools.

For additional information, visit http://cityschoolsfoundation.com or call Lisa Trail at 615-893-2313.

Watch a special tribute video to the McPhees below: