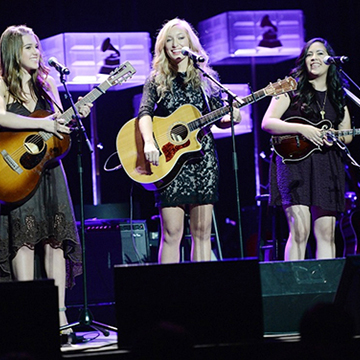 WEST HOLLYWOOD, Calif. — Since opening its doors in 1957, the legendary Troubadour nightclub has been where some of contemporary music’s biggest moments happened.

The Eagles’ Don Henley and Glenn Frey met for the first time in the club’s front bar. Elton John made his U.S. debut here. The club was where James Taylor first heard Carole King’s “You’ve Got a Friend,” which he made into his own hit.

So perhaps it was fitting that MTSU’s College of Mass Communication, on the Saturday before the 56th annual Grammy Awards, came to the Troubadour to create a special moment for its recording industry program.

Mass Comm Dean Ken Paulson, along with President Sidney A. McPhee and Beverly Keel, chair of the Department of Recording Industry, came to West Hollywood to meet with MTSU alumni and friends in Southern California. The trio of administrators is working to amplify the visibility of the program, long regarded as one of the best in the nation.

“I can think of no better place than the Troubadour, and no better time than before the Grammy Awards, to remind alumni, friends and industry leaders here about the ongoing good works by our university,” Paulson said.

On Saturday, the college partnered with the Franklin-based Americana Music Association for an event at the Troubadour to honor the late Phil Everly of the Everly Brothers, who died last year.

Co-presented by Vector Management and Nissan, the event highlighted Grammy-winning artist Bonnie Raitt, along with other “legends and the next generation of creative artists,” said Jed Hilly, the association’s executive director.

“This truly was an inspirational night of music,” Hilly said.

Paulson, who became dean last July, forged a partnership between MTSU and the Americana Music Association, which advocates “American Roots Music” around the world. He said the association’s tribute to Everly, who lived in Nashville, was a perfect venue for the college to make its presence known on one of music’s biggest weekends.

“We are working to build the visibility of our college, so it makes perfect sense for us to be present at the most visible music event of the year,” Paulson said.

Visiting the Troubador on Saturday were sophomores Katy Bishop and Kristen Castro, both recording industry majors, who are in the Grammy spotlight this weekend. They’re part of a Nashville-based trio called Maybe April, which includes Nashville resident Alaina Stacey. The three met each other at a Grammy camp in Nashville in 2012.

Maybe April performed at Thursday night’s “A Song Is Born” Grammy Foundation legacy concert and will play at the official Grammy after-party on Sunday.

“It’s been incredible,” Bishop said. “We’re taking in the whole experience. It’s great to represent people our age and do things like this.”

“We are bragging this weekend about the pivotal roles our former students continue to play in the recording industry,” Paulson said.

On Sunday, MTSU will be among the presenting sponsors of a Leadership Music alumni reunion at a venue less than a mile away from Los Angeles’ Staples Center, the site of the Grammy telecast that evening.

This promotional poster contains details of the Jan 25, pre-Grammy salute and tribute to the late Phil Everly held in Hollywood. MTSU was a partner for the event.

Leadership Music, based out of Nashville, holds an eight-month training program each year for rising industry figures. Paulson is on its board of directors and executive committee. Founded in 1989, it has more than 900 alumni, including nearly four dozen current and former heads of record labels.

MTSU President Sidney A. McPhee, center, stands with singer-songwriter Jim Lauderdale, left, and Ken Paulson, dean of the College of Mass Communication, at the university’s Jan. 25 reception at the Troubadour club in West Hollywood before the Americana Music Festival’s pre-Grammy salute to the late Phil Everly.

“Dean Paulson’s passion for the recording industry and his deep ties to the industry helped make him the right choice to lead our Mass Communication college,” McPhee said. “Tonight’s event underscores MTSU’s leadership in this field.”

MTSU’s Department of Recording Industry, which recently celebrated its 40th anniversary, is one of the university’s signature departments and was featured in the Aug. 24, 2013, issue of Billboard’s annual look at music education.

The department is the only one of its kind in the nation to be housed in a college of mass communication. It offers a Bachelor of Science degree with concentrations in music business, audio production and commercial songwriting, as well as a Master of Fine Arts degree in recording arts and technologies.

More than a dozen MTSU alumni, former students and faculty have been nominated for Grammy Awards in the last three years. Seven have won Grammys.

“It’s exciting and rewarding for MTSU to be at the Grammys,” Keel said. “It reflects the best of the industry, and we strive to prepare our students to be the very best.”

For more information on the recording industry program, visit http://recordingindustry.mtsu.edu or contact Keel at beverly.keel@mtsu.edu.