Bells ring on Bell Street for .. 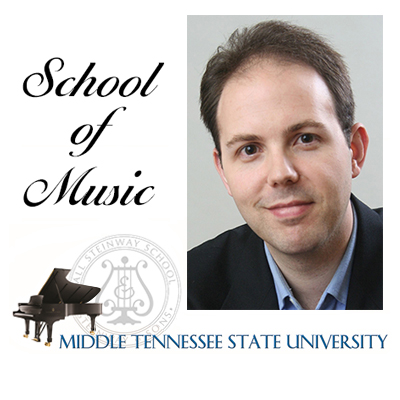 Clark’s 8 p.m. free public concert, the fifth in this inaugural season, will be conducted inside the Wright Building’s Hinton Music Hall.

Clark has performed as a soloist, chamber musician and concerto soloist throughout the United States as well as in Belgium, Italy and South Korea. His performances have been broadcast on U.S. public radio and South Korean TV.

A prizewinner in numerous competitions, Clark also serves as a member of the Stones River Chamber players and president of the Middle Tennessee Music Teachers Association.

His March 21 program will include “Prelude and Fugue in F-Sharp Major” by J. S. Bach, “Sonata No. 2 in B-flat Minor” by Frédéric Chopin, “Fantasy in F-sharp Minor” by Felix Mendelssohn and two of the Op. 39 Études-tableaux by Sergei Rachmaninoff.

“This prelude and fugue is one of my favorites,” Clark said of his opening piece, “and is an incredible example of Bach’s mastery of counterpoint, harmony, form and expression.”

The Chopin sonata, initially criticized by some as lacking cohesion, is regarded today as “one of the greatest compositional achievements in the form,” the professor said. “Audiences may be surprised to learn that a very famous ‘funeral march’ originates as the third movement of this sonata.”

Mendelssohn’s “Fantasy” is “essentially a three-movement sonata,” Clark explained, while the concluding pieces by Rachmaninoff are among the composer’s most technically difficult, the first “slow and serious” and the second “ an incredibly powerful, energetic and inspirational march.”

The MTSU Keyboard Artist Series will conclude the season April 20 with a concert by Esther Park, a prizewinning international soloist and the visiting assistant professor of piano at East Tennessee State University.