Dr. Freeman A. Hrabowski III a.. 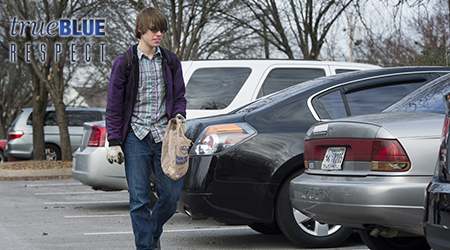 As spring approaches and students, staff and visitors walk the grounds of MTSU, one organization is encouraging them to stop, pause and admire the view.

Clean Campus Crew member Christian Flack picks up trash near the Fairview Building. Flack, a freshman psychology major, is one of eight crew members participating in the work-study program this semester to keep the campus looking good. (MTSU photo by Andy Heidt)

Part of MTSU’s “I’m One!” school pride campaign, the Clean Campus Crew is allowing a selected group of students to participate in the university’s work-study scholarship program.

The Clean Campus Crew was established in fall 2008 with six members under MTSU’s “Tennessee’s Best” awareness program. Eight members are on the crew this semester.

Doug Williams, executive director of marketing and branding in MTSU’s Office of Marketing and Communications, said “the initial goal of the Tennessee’s Best program was to aspire to have the best, cleanest campus in the whole state.”

Eligible “Clean Campus Crew” students are offered work-study positions that waive some tuition and fees. Accepted students work on the crew one semester at a time.

The “Clean Campus Crew,” however, offers a flexibility that other work-study positions might lack. Instead of working in a campus office behind a desk, answering phones or running errands, students walk an assigned campus route two to three times a week, depending on the weather and the amount of litter accumulated on lampposts, trees and other campus areas.

“As a single mom, working part time and in school full time, this allows flexibility and gives me some exercise,” Salmon said, “and on the weekend I can even get the kids involved in helping pick up trash if my hours are not filled during the semester.”

Each student can choose to work mornings, evenings or even on the weekends, as long as his or her required 75 hours of service is completed by the end of the semester.

Williams said there have been some who volunteered for the Clean Campus Crew “just because they wanted to make a difference.” That willingness to donate time could be an indication of school pride — what is sometimes referred to at MTSU as “Respect the Blue.”

“’Respect the Blue’ simply means to be proud of where you are and contribute now,” Salmon explained. “Give back to the place enriching you by showing respect for property, professors and one another.”

“We are all one campus and we should all take part in making this campus as clean as possible,” added fellow crew member Christian Flack, a freshman psychology major from Murfreesboro.

“If every person picked up one piece of litter each day, the campus would be spotless. It’s these small, consistent efforts that make a huge difference.”

The Clean Campus Crew serves in conjunction with Facilities Services, which maintains the grounds of the entire university.

To learn more about the Clean Campus Crew, contact Williams at 615-494-2920 or via email at doug.williams@mtsu.edu.