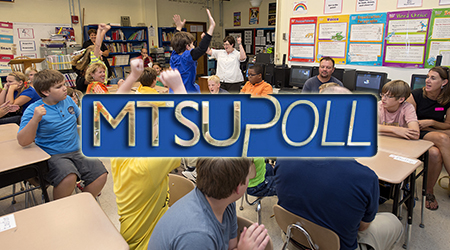 Conducted Feb. 11-19, the telephone poll of 650 randomly selected Tennessee adults found 46 percent opposed to the plan but 40 percent in support of it — a statistical “dead heat,” given the poll’s four-percentage-point error margin.

Another 12 percent of Tennesseans said they did not know, and the remaining 2 percent declined to answer.

“Statewide, it’s too close to call,” said Dr. Ken Blake, director of the poll at Middle Tennessee State University. “Opponents of the plan outnumbered supporters in our sample, but it’s unclear whether the same is true among all Tennesseans. They appear evenly, or nearly evenly, divided.”

By contrast, 48 percent of whites oppose the plan, while the rest give no answer.

The poll asked respondents, “Suppose a child in Tennessee is poor and is attending a public school that is among the bottom 5 percent in overall achievement. Would you favor or oppose using state money to send such a child to a private school?”

An analysis of attitudes solely among whites found whites in Middle Tennessee significantly more opposed (53 percent) than in favor (33 percent) of the plan. Twelve percent were undecided, and the rest gave no answer.

A similar pattern emerged among whites in West Tennessee with 53 percent opposed, 28 percent in favor, 17 percent undecided and the rest giving no answer.

The chart above shows Tennesseans’ views on public school quality from data in the spring 2013 MTSU Poll, conducted in mid-February.

Whites in East Tennessee were evenly divided with 44 percent opposed, 43 percent in favor, 11 percent undecided and the rest giving no answer.

Attitudes toward the plan are statistically uniform across party affiliation. Thirty-eight percent of the governor’s fellow Republicans supported the measure compared to 41 percent of independents and 45 percent of Democrats.

Meanwhile, Tennesseans give the quality of the state’s public schools about a “C” on average but rate their local schools’ quality a significantly higher “C-plus,” on average.

For more information on the MTSU Poll anytime, visit http://mtsusurveygroup.org.