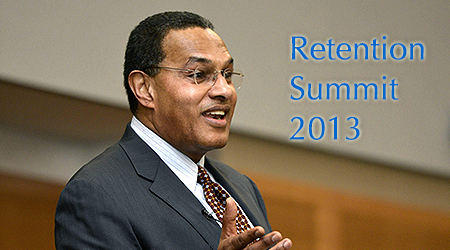 A college president addressing the retention and graduation issue in higher education at MTSU emphasized creating a campus culture that nurtures students.

Known nationally as an education innovator, University of Maryland-Baltimore County President Freeman A. Hrabowski III kicked off MTSU’s Feb. 25 Retention Summit with a call to listen more to students’ views.

Hrabowski, who has been hailed by Time magazine as one of the “10 Best College Presidents” in the country, has been tapped by President Barack Obama to chair the President’s Advisory Commission on Educational Excellence for African-Americans.

In encouraging MTSU personnel to get to know students personally, Hrabowski said, “You don’t know (a) person until you know that person’s story.”

Hrabowski also encouraged participants gathered inside the Student Union ballroom to use analytics to pinpoint students who might need assistance, including African-Americans, Hispanics, first-generation college students and low-income whites.

“Campuses that are becoming increasingly enlightened are using technology and mathematical modeling in order to look at trends in academic performance,” Hrabowski said.

An audience member noted that a bill pending in the Tennessee Legislature would prevent state government entities from collecting or reporting data based on race, gender or ethnicity unless required by federal law or court order.

“That is about the same level of enlightenment as burning libraries,” Hrabowski said. “When people don’t want to know the truth, then we have moved beyond the idea of enlightenment completely.”

The measure is Senate Bill 0007, which is sponsored by state Sen. Jim Summerville, R-Dickson. It has been referred to the Senate State and Local Government Committee.

In noting that about two-thirds of Americans do not have college degrees, Hrabowski said that while it’s fine to have beautiful buildings on campus, first-generation students could find such structures intimidating, thus diminishing their senses of self.

“If a student has a sense of self, … that student will work harder and harder, and nothing takes the place of hard work,” he said.

Hrabowski also urged the estimated 200 summit participants to create a climate that does not result in defensiveness when the campus community expresses what he called “the good, the bad and the ugly” about the university.

The summit was held in response to the Tennessee General Assembly’s emphasis on retention and graduation rates in institutions governed by the Tennessee Board of Regents.

“With the Complete College Act of Tennessee that was passed two years ago by the General Assembly, it has put the onus now on the campuses, on the individuals, on the faculty, the staff and administrators to make sure our students are successful and become productive citizens once they enter our institution,” said MTSU President Sidney A. McPhee.

MTSU recently announced that it granted more bachelor’s degrees and graduated more students for less money in 2011-12 than any other institution governed by the Board of Regents.

However, according to Vincent Windrow, director of MTSU’s Intercultural and Diversity Center, the graduation rate for African-American students at MTSU for 2004-10 was 39.9 percent, a figure he said must be raised.