‘MTSU On the Record’ guest exp.. 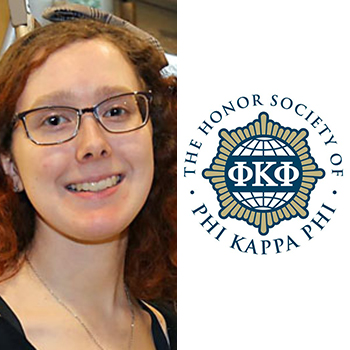 An MTSU senior is the recipient of a $1,000 grant from the national headquarters of MTSU’s most prestigious honor society.

Rebecca Clippard, a Murfreesboro resident majoring in Japanese and Spanish, received the stipend from The Honor Society of Phi Kappa Phi, the nation’s oldest and most selective collegiate honor society for all academic disciplines.

The Oakland High School alumna and MTSU Buchanan Scholar is one of only 25 students nationwide to receive the award.

“I am so grateful for the Phi Kappa Phi grant,” said Clippard. “Learning has always been one of my passions, and I want to earn a Ph.D. in Japanese and be a college professor.”

Clippard will use the grant to study at Kansai Gaidai University in Hirakata, Japan, an institution with which MTSU has a long-standing partnership. She plans to depart later this month and return at the end of May or June 2017, depending on the scheduling of her final exams.

“As I got older, I discovered Japanese was a complex and beautiful language, and I had no hesitation in choosing Japanese as my major,” Clippard said.

She also is the recipient of the Bridging Scholarship for Study Abroad in Japan, a national scholarship funded by the American Association of Teachers of Japanese.

Phi Kappa Phi has chapters at more than 300 colleges and universities in North America and the Philippines, including MTSU. Membership is by invitation only to the top 10 percent of seniors and graduate students and 7.5 percent of second-term juniors.

Since the program’s inception in 2001, the honor society has awarded more than $750,000 in study-abroad grants.

“I understand how much dedication this will take and am glad that there are scholarships out there that encourage students to fulfill their dreams,” Clippard said.