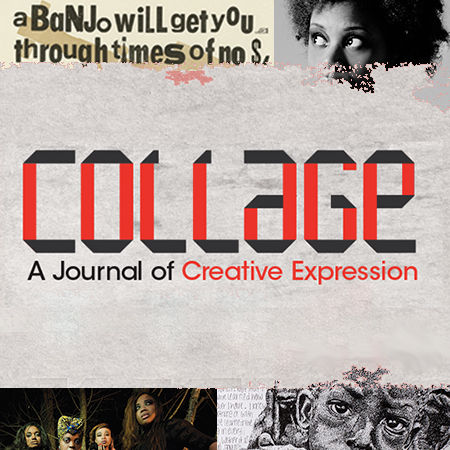 MTSU’s “Collage: A Journal of Creative Expression” continues to excel against peer publications in national competitions.

“In the years that ‘Collage’ has been housed in the Honors College, it consistently has won awards, but the last three have been especially special,” Vile said.

“‘Collage’ is a great example of bright students working under the coordination of a dedicated staff member (Marsha Powers) and producing a publication in which the entire university community can take pride.”

“Collage” is published twice a year. Copies are available in the Paul W. Martin Sr. Honors Building in the first-floor students’ commons area and outside the “Collage” office in Room 224.

Copies also are available in special racks around campus in Peck Hall and the Todd, Student Union and Bragg Mass Communication buildings.

“Winning Crown Awards three years in a row, one silver and two gold, is a high honor and a testimony to the quality of our students,” Powers said, mentioning that senior Courtney Hunter and alumna Jennifer Johnson, designer and editor-in-chief, respectively, of the award-winning issues, “worked tirelessly to produce quality journals both semesters.

“Their leadership, the input of our committed staff and the talent of MTSU’s student contributors were a winning combination.”

Hunter and Johnson discussed their “Collage” experiences and the accumulating recognition.

“I’m proud of the staff and submitters who contributed to the fall 2011 and spring 2012 issues,” said Hunter, an art major who designed the award-winning issues and is editor of the spring 2013 edition.

“They gave me ample creative content to design two impressive journals. Designing these issues was an invaluable experience that allowed me to explore and develop my style on a platform where my growth would be recognized. I am grateful to have had the opportunity.”

“‘Collage’ holds a very dear place in my heart, perhaps because of the community and collaboration of which it is a product,” said Johnson, who was editor-in-chief of the fall 2011 and spring 2012 issues.

“It is an honor to have been a part of this publication and to have contributed to the Gold Crown magazines.”

Johnson recently was accepted into the graduate counseling program at Peabody College of Education and Human Development at Vanderbilt University.

In the recent contest, 1,344 digital, print and hybrid magazines, newspapers and yearbooks published during the 2011-12 academic year were eligible for judging in the 2013 Columbia University Crown Awards program, Powers said.

This year marks the 45th anniversary of “Collage,” which began in 1968. It has been sponsored by the Honors College since 2004.

She said “Collage” is very selective, typically selecting only 50 to 60 out of about 250 submissions per issue. Nashville-based Franklin Graphics prints the magazine.

For the past two years, alumnus Paul Martin, the first graduate from the Honors College, has made a special contribution to support “Collage” and other honors publications. He gave this year’s donation in honor of MTSU President Sidney A. McPhee for his continuing dedication to the Honors College and for his unwavering commitment to academic excellence.

You can see the winning issues online, along with archives dating back to spring 2005,  at http://capone.mtsu.edu/collage/issues.html.