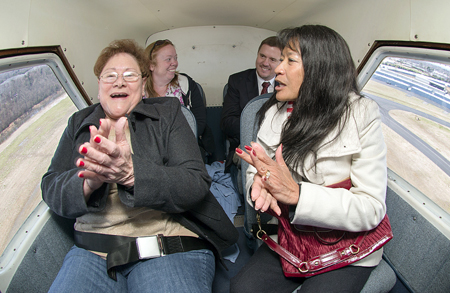 Three veterans enjoyed a flight to remember Wednesday when MTSU partnered with the Tennessee State Veterans Home in Murfreesboro to fulfill their wish to return to the skies.

MTSU aerospace professor and pilot Terry Dorris and professor Tony Johnston met the residents at the Murfreesboro Airport for the flights on the MTSU Aerospace’s single-engine 1953 DeHavilland Beaver.

State Veterans Affairs Commissioner Many-Bears Grinder and some of her staff also attended to show support for veterans, who were accompanied by medical personnel from the State Veterans Home as a precaution.

Veteran Will Tuttle’s family and MTSU alumni Troy Tuttle and Sonja Tate wave as their father prepares for take off Wednesday at Murfreesboro Airport.

Veterans on the flight:

• Will Tuttle, 82, served more than 20 years in the U.S. Air Force as a paratrooper in the Korean and Vietnam wars. Tuttle also wrote the program for Combat Controller Training.

• Lynn Holliday, 70, served more than 20 years in the U.S. Navy in the legal administrative offices. Holliday also served during Vietnam. He studied to be a pilot but could not afford to get his license. It had always been his dream to fly.

Johnston, a professor in the School of Agribusiness and Agriscience, said he and Dorris have done several of these flights in recent years, working with Veterans Home activity director Barbara Cochran, who shares veterans’ requests with them periodically.

“My father was at state VA before and my mother is there now, so I have a long-standing connection to the facility,” said Johnston, a National Guard member who has two decades of active and reserve duty.

The flights began after “one of the veterans made comment to the activity director that he wished he could fly one more time before he died,” he said.

Johnston said that for some veterans, the flights become a final check on their bucket lists. He recalled a previous flight where one of the veterans passed away just two weeks after his flight.

“We’re honored to be able to do this for some of our veterans,” he said.