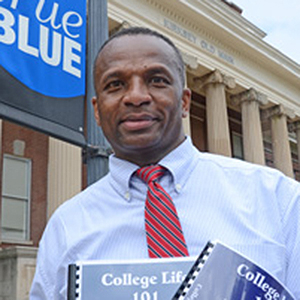 For alumnus Michael Mc Donald (B.S. ’79), a lot has changed at MTSU since he attended classes in the late 1970’s. A recent trip through the new Student Union served as a can’t-miss reminder.

“This is amazing,” the Murfreesboro resident said during a recent visit to the 211,000-square-foot anchor on the campus’ east side.

MTSU alumnus Michael Mc Donald (B.S. ’79) has released an updated edition of his book “College Life 101,” which he wrote to help guide young college-bound high school seniors through the transition into higher education with helpful advice. (MTSU photo by News and Media Relations)

His visit came amid the traditional CUSTOMS new student orientation tours, an introduction to campus for the same type of student Mc Donald had in mind when he wrote a book on making the transition from high school to higher education.

To gather his nuggets of advice, Mc Donald sent out a questionnaire to students throughout the region and found common threads from those who responded.

“I asked them what did they know now that they wish they’d known as freshmen,” he said. “A lot of them talked about the same things, from ‘I wish I’d known how to study for exams’ to how to better prepare for lessons.”

An ordained minister, Mc Donald released his first edition in 2004 with a Christian-based theme, a version that remains available. He decided to broaden his appeal with the secular second edition, released in 2011, that addresses more pressing issues such as Internet and technology usage that young students increasingly face.

Mc Donald said his books are being used at Vanderbilt University, where he attended divinity school, as well as at Cumberland University and TSU, among others. He’s hoping to spark greater use of his book at MTSU, which he remembers fondly.

Mc Donald was the first African-American student elected as Student Government Association president in MTSU’s history (1978-79). He also was the first recipient of the university’s Distinguished Young Alumni in Achievement Award in 1987.

Mc Donald earned his Master in Public Administration from Southern Illinois University at Carbondale and his law degree from The John Marshall Law School in Chicago. He currently teaches at both Cumberland University and Columbia State Community College and serves as pastor of Lighthouse Wesleyan Community Church in La Vergne, Tenn.

For more information about the book or how to order it, contact Mc Donald at 615-944-8267 or via email at mcdon6mch@aol.com.