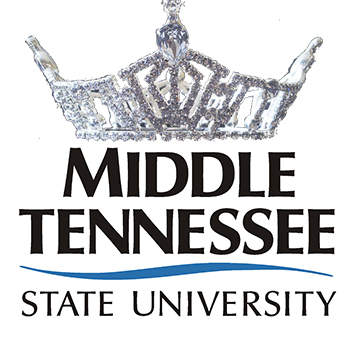 Thompson, daughter of a former Miss Chattanooga and a 2012 public relations graduate of the University of Tennessee at Knoxville, will now represent Tennessee in September’s national pageant.

Junior Cali Stoltz, who is Miss MTSU, and senior Megan Hale, who is Miss Middle Tennessee Blue Raider, represented the university in Jackson June 19-22 to compete for the top honor.

They were joined by seniors Emilee Ketron, the current Miss Historic Jonesborough; Jasmine Secrest, who is Miss Jackson, Tenn.; and Jill Brooks, winner of the Miss Nashville Pageant.

The quintet challenged 31 other young Tennessee women for the statewide crown. Unfortunately, none of the MTSU students made it to the state pageant’s top 15.

Both Stoltz and Hale are majoring in concrete industry management at MTSU. Hale’s emphasis is commercial construction, while Stoltz’s focus is concrete contracting.

Stoltz is a native of Lewisburg, Tenn., and sang “Sittin’ on the Dock of the Bay” for her talent performance. Hale, who is from Gallatin, Tenn., performed a portion of the ballet “Swan Lake” during the talent competition.

Ketron, a native of Kingsport, Tenn., is a speech and theatre major focusing on communication disorders. She performed an acrobatic dance to “Ease on Down the Road” for the talent competition.

Secrest, who is a Memphis resident, performed a contemporary jazz dance routine to “I Can’t Make You Love Me” for her talent challenge. She’s majoring in health and human performance with a concentration on recreation therapy.

Brooks, a singer from Mount Pleasant, Tenn., is majoring in entrepreneurship and business finance. She performed “All by Myself” in the talent competition.

The new Miss Tennessee 2013 will go to Atlantic City for the Sept. 10-15 Miss America competition.

In 2012, then-MTSU senior Jessica Hibler represented Tennessee in the Miss USA pageant, earning a spot as one of 16 semifinalists in that national competition. A 2007 MTSU alumna and former Miss Middle Tennessee Blue Raider, LeShan Matthews, was second runner-up in the Miss Tennessee USA 2012 pageant.

You can learn more about the Miss Tennessee and Miss America pageants at www.misstennessee.org and www.missamerica.org, respectively. You also can read extensive news coverage of the state event via one of the pageant sponsors, www.jacksonsun.com/misstn.