Middle Tennessee State University signed an agreement Wednesday, Feb. 6, to extend the MTSU Promise to Columbia State Community College, the fifth such pathway established for students with associate degrees to move seamlessly to the four-year university.

MTSU is No. 1 in the state in transfer students and is the top institution using the reverse transfer process. Columbia State is the second-leading transfer feeder school for MTSU. 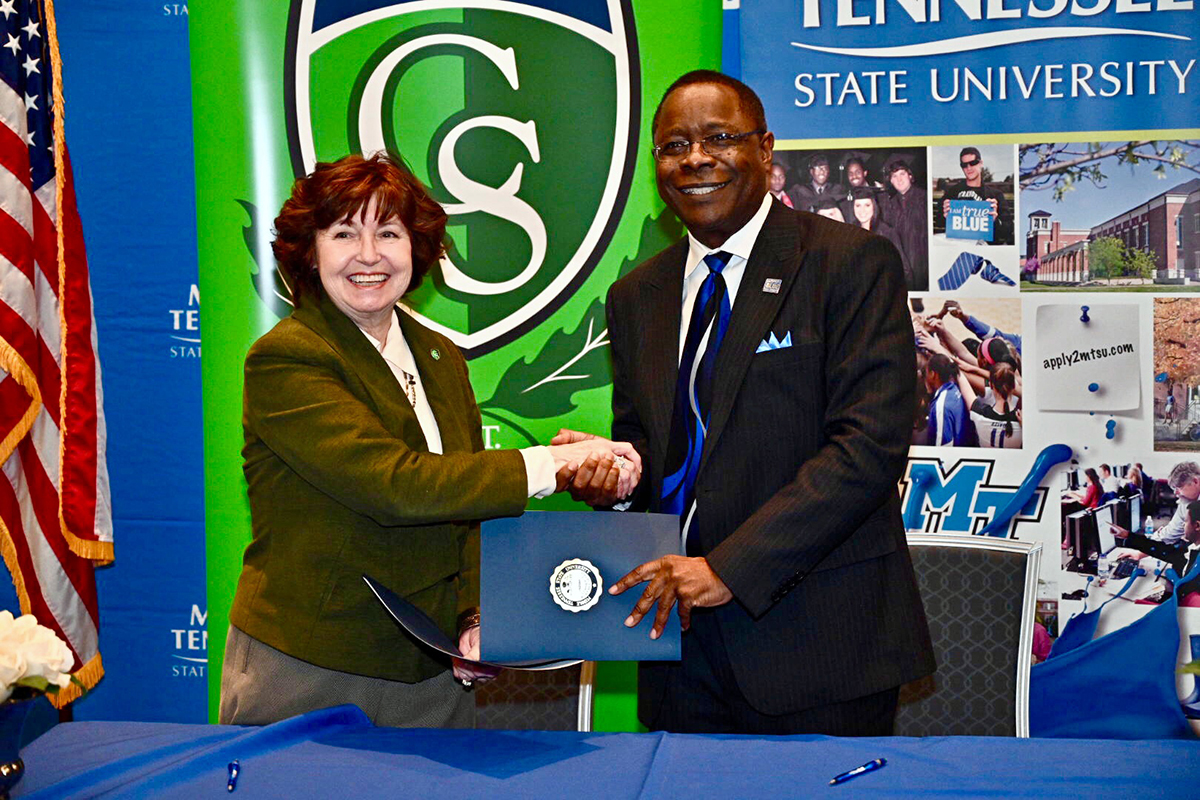 Presidents Janet Smith, left, of Columbia State Community College and Sidney A. McPhee of Middle Tennessee State University shake hands after signing an “MTSU Promise to Columbia State” to ease the transition for transfer students from community college to university Feb. 6 in the MTSU Student Union Ballroom. Through its existing Guaranteed Transfer Scholarship Program, Columbia State students who transfer to MTSU will receive $3,000 per year for two years, or a maximum of four semesters, if they achieve a 3.0 GPA. (MTSU photo by J. Intintoli)

The signing comes nine days from MTSU’s Feb. 15 deadline for the transfer guaranteed scholarship— $3,000 per year for those who meet qualifications.

Columbia State, whose main campus is in Columbia, Tennessee, and has five satellite campuses and an online e-Campus, is the fifth community college to join the MTSU Promise program. In it, the university pledges to help students at partner schools complete their associate degrees, then move forward in seeking a four-year degree.

“This is an opportunity to build and strengthen our relationship with a great community college,” McPhee said. “This agreement will help their students and ours, too. They can transfer and focus on their education by having all the obstacles out of the way.”

Smith said she looks forward to renewing the partnership with MTSU.

“The majority of our students transfer to MTSU, and our faculty look forward to coming to MTSU and discussing curriculum with their faculty,” Smith added. 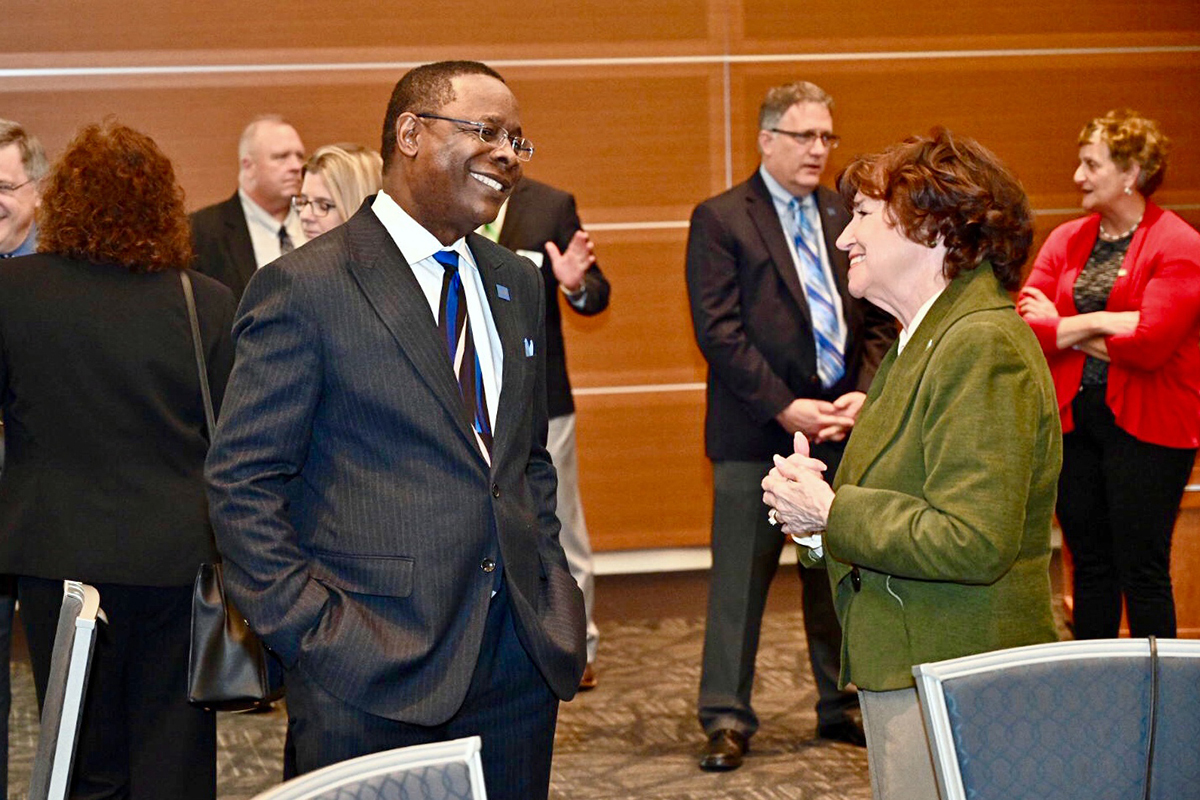 Presidents Sidney A. McPhee, left, of MTSU and Janet Smith of Columbia State Community College exchange greetings Feb. 6 in the MTSU Student Union Ballroom just before signing an MTSU Promise agreement between the two schools to ease the transition for transfer students from community college to university. (MTSU photo by J. Intintoli)

“This is all about student success and finding ways to work together. Our students do well here, and we’re very proud of Columbia State graduates.”

The agreement calls for Columbia State to share its students’ directory information with MTSU so they’re included in tailored emails and hard-copy mailings to support planning for a bachelor’s degree after they successfully complete an associate degree.

Through its existing Guaranteed Transfer Scholarship Program, MTSU will provide Columbia State students who transfer to MTSU with $3,000 per year for two years, or a maximum of four semesters, based on their achieving a 3.0 GPA.

Students transferring to MTSU will not be eligible to apply to receive the Guaranteed Transfer Scholarship until after completing 45 credit hours at Columbia State.

Dr. Deb Sells, MTSU’s vice president for student affairs and vice provost for enrollment and academic services, said the MTSU Promise is a program where Columbia State and other community college students can begin to consider their bachelor’s degree as they begin their associate degree.

“They can be successful at their community college and then successfully complete their bachelor’s degree,” she said. 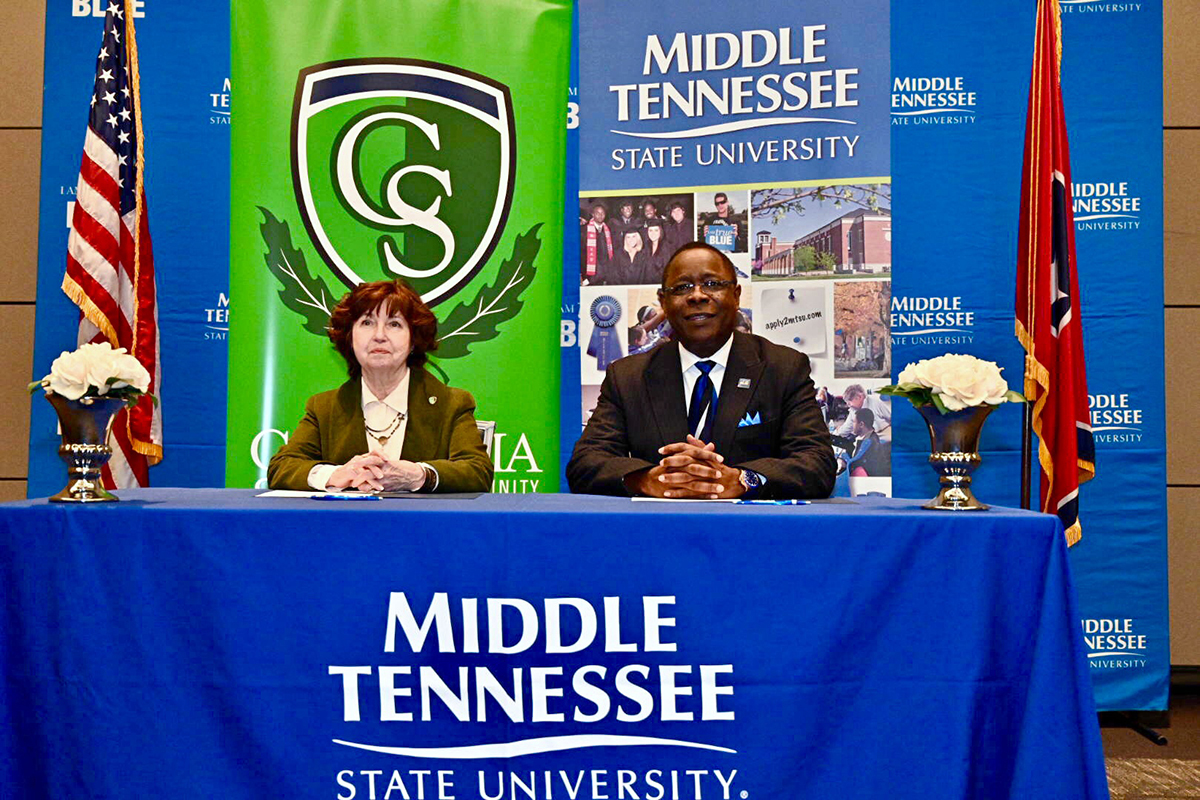 Presidents Janet Smith, left, of Columbia State Community College and Sidney A. McPhee of Middle Tennessee State University talk to the audience before signing an agreement marking the MTSU Promise to Columbia State, the fifth such pathway established for students with associate degrees to move seamlessly to the four-year university. The signing occurred Feb. 6 in the MTSU Student Union Ballroom. (MTSU photo by J. Intintoli)

Sells said the annual application deadline is Feb. 15, which means the majority of participating Columbia State students will have completed 60 credits before they transfer.

MTSU will also guarantee that if these students complete 60 credits with a 3.0 GPA at Columbia State, they will be guaranteed admission and a scholarship to attend MTSU for their last two years of study, Sells said.

Smith told the group that her nephew, Mat Smith, is a senior computer science major at MTSU. The Dickson, Tennessee, native transferred from Columbia State, where he earned a general transfer associate of science degree.

Provost Mark Byrnes and all of the MTSU deans attended the signing, which was followed by a luncheon.