MTSU participants ‘rededicate’ themselves to Const... 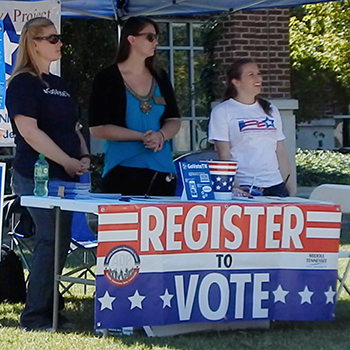 While the rest of the country argues over and misinterprets the 228-year-old document, the MTSU community went straight to the source to celebrate Constitution Day.

Students, faculty and other volunteers once again read the U.S. Constitution aloud in its entirety at multiple sites across campus. In fact, to accommodate each 75-minute complete reading session at each of MTSU’s colleges, the celebration had to begin a day early — Sept. 16 — and continue Sept. 17 with dozens of participants.

Volunteers stood outside their college buildings to read passages from the historic document, some clutching a backpack in one hand and reading notes in the other, some grasping the temporary podiums firmly to recite their assigned passages.

Some held forth to relatively large crowds, while others spoke quietly to a handful of people. You can watch some of the participants below.

“Today, we commemorate not only the Constitution’s signing 228 years ago on this day but also the living document and the amendments that strengthened it further,” Dr. John Vile, dean of the University Honors College, told an audience between the Paul W. Martin Sr. Honors Building and the Student Union.

Vile, an internationally recognized Constitutional law scholar, once again donned a costume depicting James Madison, instrumental in the drafting of the Constitution as well as the fourth U.S. President, to conduct his reading.

“The Constitution is a framework for our democracy. It secures our liberties and rights as Americans, and it makes clear our responsibilities as citizens,” the dean said. “To affirm our commitment to its living principles, we as participants, in a participatory democracy, are invited on Constitution Day to pause, read the Constitution aloud, and again this year, to affirm and renew and rededicate ourselves to its ideals.”

MTSU observes the Constitution’s 1787 signing every year with special events and programs organized by the university chapter of the American Democracy Project.

This year’s civic-awareness efforts also included a special panel discussion on the 50th anniversary of the U.S. Voting Rights Act with two men who were right in the middle of the action: fellow Freedom Riders the Rev. C.T. Vivian, who helped the Rev. Martin Luther King Jr. create the Southern Christian Leadership Conference, and the Rev. James Lawson, who organized the Nashville lunch counter sit-ins of 1960 during his divinity studies at Vanderbilt University and was part of the 1965 Selma-to-Montgomery marches. You can read a story and watch a video from the discussion here.

Oct. 11, 2016, is the final voter registration deadline to cast a ballot in the state and federal general election, which includes the presidential election, on Nov. 8, 2016.

According to Tennessee law, all voters: