Professor tracks medieval book arts on ‘MTSU On the Record’ 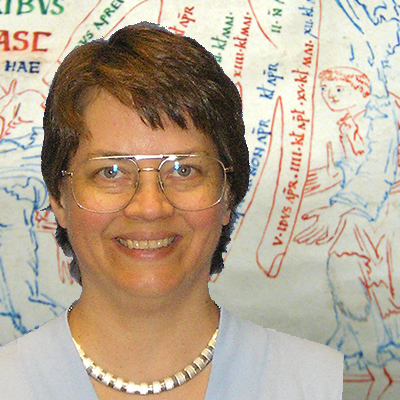 A recent edition of the “MTSU On the Record” radio program examines the process of making books before the advent of the printing press.

MTSU English professor Rhonda McDaniel recreated a page from The Leofric Missal, shown here, a document believed to have been created around 900 A.D. in the borderland between Germany and what is now France. (MTSU News and Media Relations photo)

Host Gina Logue’s interview with Dr. Rhonda McDaniel, a professor of English, first aired Sept. 21 on WMOT-FM (89.5 and www.wmot.org ). You can listen to their conversation below.

While attending a summer seminar run by the National Endowment for the Humanities at the University of Iowa, McDaniel gained hands-on experience in making books the way monks living at priories did in the Middle Ages, about half a millennium before Johann Gutenberg invented moveable type.

McDaniel and other participants scraped and stretched animal hides to make parchment.

She recreated one page of The Leofric Missal, a document believed to have been created around 900 A.D. in the borderland between Germany and what is now France. It is named for Leofric, who was then the bishop of Exeter in England.

The Leofric Missal is a book of all of the parts of the Catholic mass in the original Latin.

McDaniel chose to recreate a page featuring an elaborate diagram that served to help the clergy calculate the date of Easter from year to year.

Even more intriguing to McDaniel than the physical process of replicating text from scratch was the importance of memory in the creation of medieval text, a necessity when multiple copies of a given text were rare.

“When one is constructing the images, the devices by which one is going to remember certain concepts, the advice was to attach an emotion to it, preferably a strong emotion,” said McDaniel.