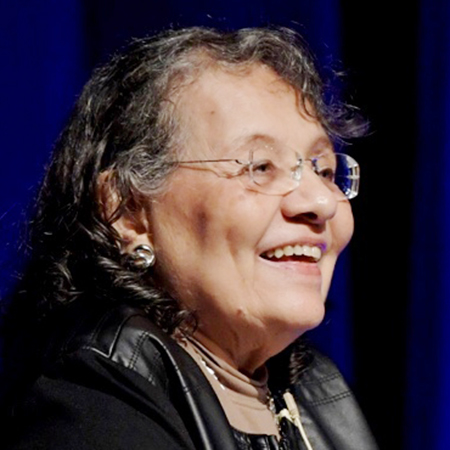 Diane Nash is using her history-changing work for civil rights to advise and encourage those today who want to help America ensure freedom and justice for all.

“It was an interesting time and I’m glad I got to see it,” the trailblazer for equality said Wednesday, Sept. 14, at MTSU’s Constitution Day celebration while discussing those frightening but uplifting days.

“I wish young people today could see their grandparents involved in that movement, with its discipline and strategy and courage. We were brilliant.”

Nash, who helped integrate Nashville lunch counters with peaceful sit-ins in 1960 and desegregate bus travel with the Freedom Riders and ultimately aided passage of the Voting Rights Act of 1965, recalled the segregated Nashville of the 1950s and ’60s, when she was a student at Fisk University.

The sight of black citizens sitting on downtown curbs, forced to eat their noon meals brought from home or bought from restaurants’ side windows and back doors while their white co-workers dined in indoor comfort, both infuriated her and broke her heart.

“I found that dehumanizing and humiliating,” the Chicago native said, noting that Fisk students were relatively insulated from racism on campus but faced it almost as soon as they stepped off the university grounds.

“It wasn’t even possible to go downtown with a girlfriend and window-shop and treat yourself to a quick lunch. I found segregation very limiting. … When I obeyed a segregation rule, I felt like I was agreeing that I was too inferior to other people to do what the rest of the public did. I found that intolerable.”

During the Sept. 14 MTSU event in Tucker Theatre, which included a post-lecture discussion led by public history doctoral student Torren Gatson, Nash told the full house that she “enthusiastically” supports efforts to bring justice and equality by groups that include the Black Lives Matter network.

She cautioned, however, that “there’s a difference in just protesting and in conducting a nonviolent campaign,” referring to the extensive training that she and other activists underwent in workshops with the Rev. James Lawson. Lawson, who visited MTSU last year for the 50th anniversary of the U.S. Voting Rights Act, studied and shared Mahatma Gandhi’s principles of civil resistance through nonviolence, self-discipline, truth, fearlessness, respect and economic strategies.

“I think they’re doing what they saw, which were the demonstrations and the marches,” Nash said of today’s activists working for change. “They did not see the workshops, where we were really trained in philosophy and strategy and really thinking through what we wanted to accomplish and what love is.

“We were not just protesting. … Very often, the powers that be know you don’t like what they’re doing, but they’re determined to do it anyway. … You can’t build good will in a beloved community by visiting violence on someone. The unjust political system is the enemy, an unjust education system. Ignorance, racism, sexism, mental illness — those are the enemies.”

Nash’s talk was one of the highlights of the daylong celebration across campus in observation of the 229th anniversary of the Constitution’s signing.

Students, faculty, staff and visitors read the historic document at multiple sites across MTSU throughout the day, and voter registration tables were set up in busy locations to help citizens prepare for the Nov. 8 federal and state elections. Grammy-nominated singer/songwriter Tracy Nelson, the blues-rock icon who fronted Mother Earth in the 1960s and ’70s and now sings across the country, also performed in the McWherter Learning Resources Center.

MTSU observes the Constitution’s 1787 signing every year with special events and programs organized by the university chapter of the American Democracy Project.

Tuesday, Oct. 11, is the final voter registration deadline in Tennessee to cast a ballot on Nov. 8.

Diane Nash, center, leads a silent march of more than 3,000 people to Nashville’s City Hall with fellow civil rights activist C.T. Vivian, left, on April 19, 1960, the day attorney J. Alexander Looby’s home was firebombed and students at nearby Meharry Medical College were injured. The protesters, who had been conducting sit-ins at segregated Nashville lunch counters, met on the city hall steps with then-Mayor Ben West to successfully demand an end to the segregated eateries and to work toward ending injustice and racial violence in the city. (Archive photo from The Tennesseean)

With biology professor Kim Cleary Sadler looking on and a line of students waiting to take their turn, MTSU freshman Aja Davis reads an amendment to the Constitution Wednesday, Sept. 14, during the university’s Constitution Day celebration outside the Science Building.

Tony Beard, former MTSU National Alumni Board president, reads a portion of the Constitution Wednesday, Sept. 14, outside of the Cason-Kennedy Nursing Building as part of the university’s Constitution Day celebration.

Dr. John Vile, dean of the University Honors College, reads a portion of the U.S. Constitution Wednesday, Sept. 14, during MTSU’s Constitution Day celebration as Associate Dean Philip Phillips waits his turn with a group of students, faculty and staff.

Area middle school students line up to read the U.S. Constitution outside of the Cason-Kennedy Nursing Building Wednesday, Sept. 14, as a part of MTSU’s Constitution Day celebration.

Click the image for a full-sized PDF version of the poster.