‘Democracy out loud’ in evidence at MTSU during Co...

‘Democracy out loud’ in evidence at MTSU during Constitution Week readings [+VIDEO, GALLERY]

MTSU students across campus have learned firsthand what democracy sounds like when it is read out loud.

At six separate locations, students, faculty and staff stood in line to read aloud sections of the U.S. Constitution Sept. 14-16 in celebration of Constitution Week, a schedule of activities concluding with the 234th anniversary of the Constitution’s ratification on Friday, Sept. 17. A slideshow of photos from all six locations is available at the end of this story.) 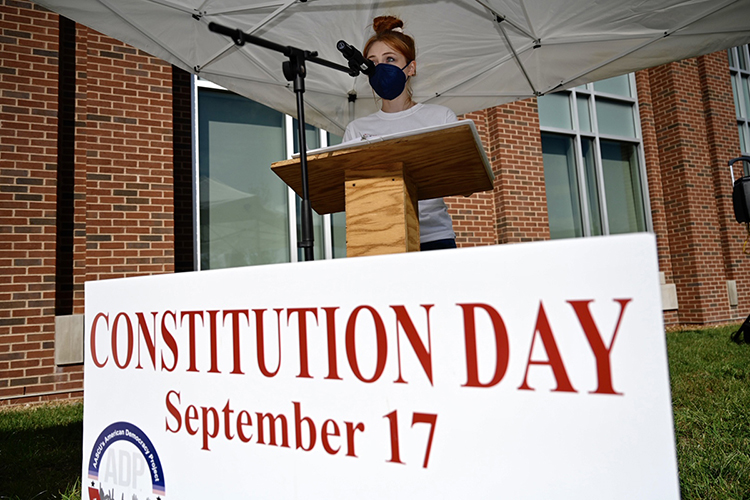 A student reads a portion of the U.S. Constitution at the Academic Classroom Building Sept. 16 during MTSU’s Constitution Week celebration. (MTSU photo by J. Intintoli) 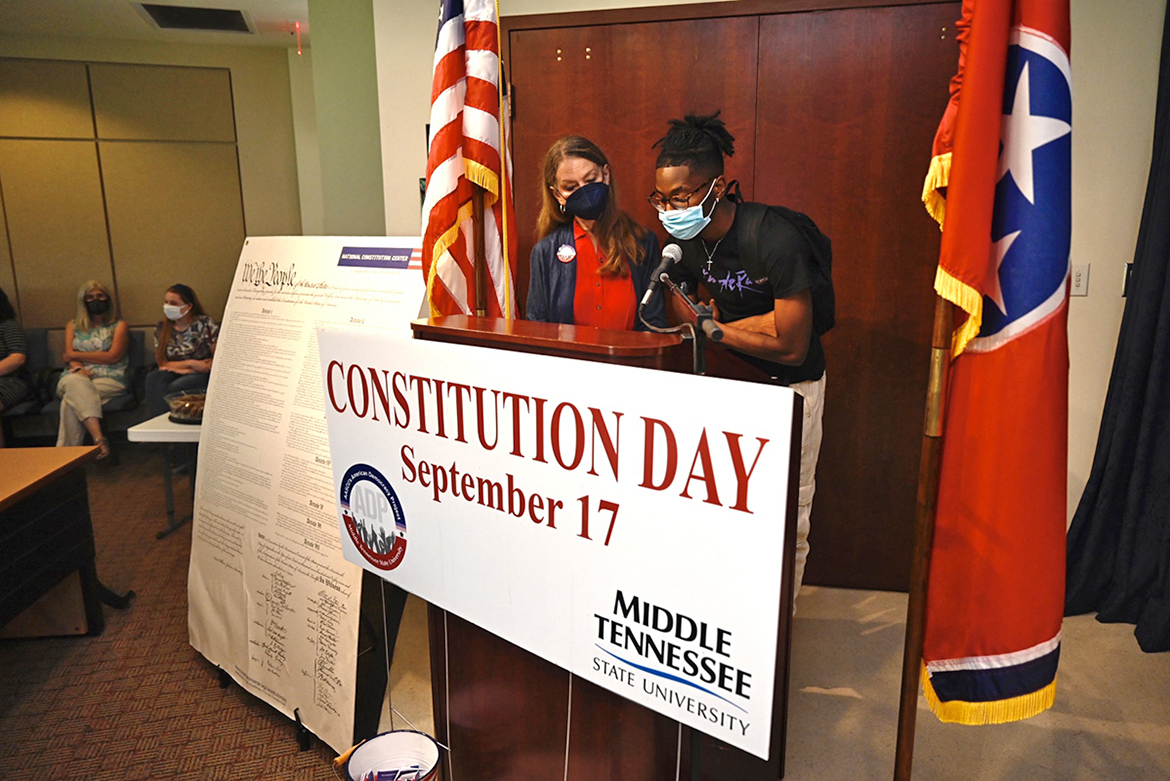 Dr. Mary Evins, a research professor of history and coordinator of the American Democracy Project at MTSU, assists a student in reading a section of the U.S. Constitution Sept. 15 in the Paul W. Martin University Honors Building. Students read sections of the founding document at six venues Sept. 14-16 to help celebrate Constitution Week. (MTSU photo by J. Intintoli)

“I think it’s important for everyone around campus to have awareness of the importance of the Constitution,” said Mallory Cutrell, a senior elementary education major from Hendersonville, Tennessee, after reading a section on House and Senate compensation.

Holly Jackson, a master’s degree candidate in business management, was encouraged to take part to enhance her understanding in her Legal Environment of Business class. The portion she read dealt with coinage and counterfeiting.

“I feel as though it’s important that people actually know what’s in the document itself,” the Columbia, Tennessee, native said. “I think a lot of people know we have it, but I doubt most of them actually know what it says.”

Junior Callum Hay read a section on when Congress convenes. That originally was each December until 1933, when it was changed to January.

“A lot of people like to throw around that, you know, it’s their right to do such-and-such,” said the finance major from Murfreesboro. “So I think it’s good that people actually read it for themselves and actually know their rights.” 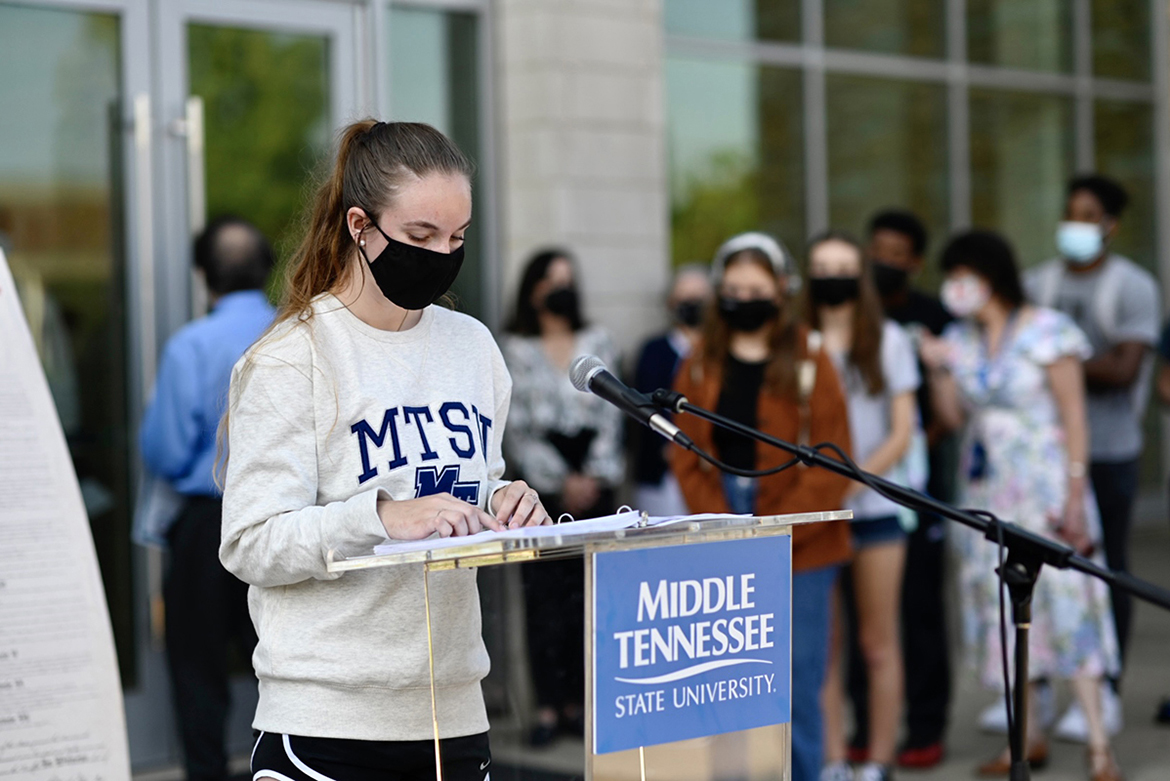 A student reads a section of the U.S. Constitution outside the MTSU Science Building Sept. 14 as part of the university’s celebration of Constitution Week. (MTSU photo by J. Intintoli) 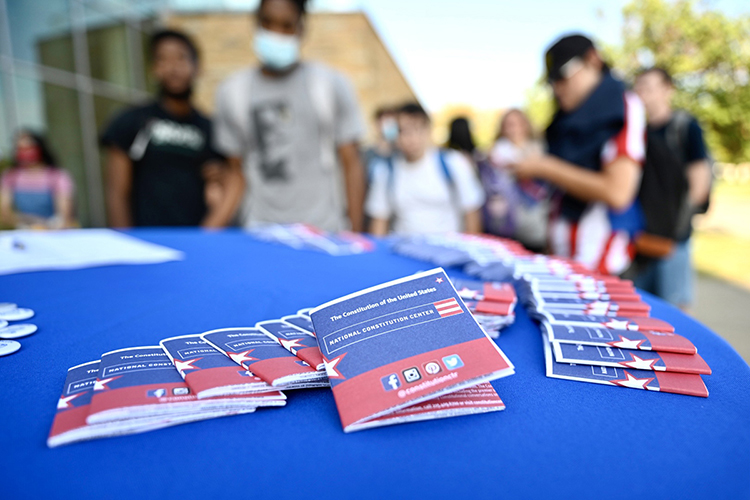 Pocket-sized copies of the U.S. Constitution, provided by the American Democracy Project at MTSU, are stacked on a table fpr students who read sections of the founding American document Sept. 14-16 in celebration of Constitution Week on campus. (MTSU photo by J. Intintoli)

The American Democracy Project at MTSU sponsored the campus Constitution readings. The group’s coordinator, Dr. Mary Evins, a research professor in the Department of History, admitted that some students were receiving their first true introduction to the country’s foundational document.

“I think sometimes reading it for the first time is a bit of a shocker for our students,” Evins said. “To me, it is an imperative first step, and that nudge by faculty to get students there to do it is an important initial nudge.”

Each student received a paper pocket-sized copy of the Constitution to take with them after their reading.

“It’s old and ancient to them,” Evins said. “It does not appear relevant to them, but the truth is it’s dynamically, vitally important to them. And if their consciousness is raised, and their understanding is awakened, that’s the point of the exercise.”

This year’s readings took place outside MTSU’s Science Building,  College of Education Building, Academic Classroom Building, the Business and Aerospace Building and the Bragg Media and Entertainment Building, as well as inside the Paul W. Martin Sr. Honors Building.

For more information about the American Democracy Project, contact Evins at mary.evins@mtsu.edu or amerdem@mtsu.edu.