‘Democracy out loud’ in eviden..

HUNTSVILLE and BIRMINGHAM, Ala. — Ronnie Stapler truly believes Tim Clark Jr. not only will go places in life, but he likely will be able to name his destiny.

Stapler should know. In his 52nd year of coaching and more than 800 boys basketball victories, the hall of famer has mentored hundreds of young men. He personally has known Clark, a senior transfer from Sparkman High School to Westminister Christian Academy, for two years, but “wherever he goes, he’ll be successful and make you proud,” Stapler said. 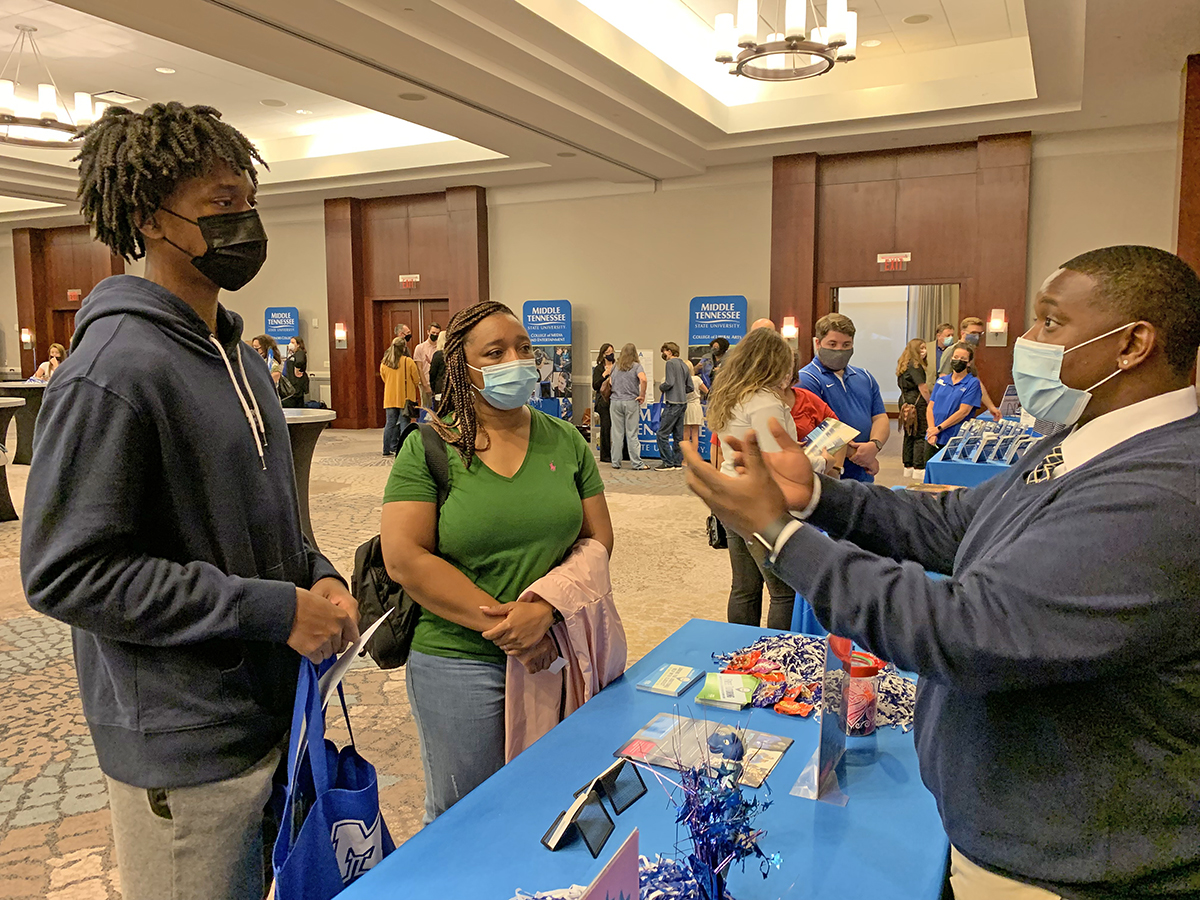 Tim Clark Jr., left, a senior at Westminister High School in Huntsville, Ala., and his mother, Wykeisa Clark, listen as Travis Strattion, provides information about the MTSU Office of Student Success Wednesday, Sept. 22, during the True Blue Tour stop in Huntsville. MTSU visits 14 cities in four states in its effort to recruit new students. (MTSU photo by Randy Weiler)

The young man with a 4.17 weighted GPA and 32 ACT, which makes him highly sought-after, said he would be interested in entrepreneurship or finance in the Jones College of Business.

“I feel like I can put my ideas into what I’m passionate about and business would be one of the best options,” he said.

Clark said MTSU is “definitely in the top three (schools) I am considering, at least after tonight.”

Verena Owsley, in her first year as senior college/career counselor at Hazel Green High School, knows how to go to bat for MTSU. For nearly 20 years, she has sent hundreds of students to the Murfreesboro, Tennessee, university.

As a consummate MTSU advocate, Owsley previously was a counselor at Greenbrier and Overton high schools and White House-Heritage. She sent many transcripts and students to MTSU.

“My students went to MTSU,” she firmly said. “It’s the number one school in the state and my kids knew it.” Many of her Hazel Green students have already applied.

At the Huntsville counselors’ luncheon, Owsley’s name was drawn by MTSU President Sidney A. McPhee for a trip to campus for 40 students.

“The hard part is getting it down to 40,” said Owsley, who added she could probably bring 80 or more Hazel Green students to MTSU.

After Owsley pitched MTSU in front of other Huntsville-area counselors, a delighted McPhee added a $2,000 scholarship, “which I will split into two, $1,000 scholarships,” she said.

On his way to the Birmingham recruiting event at the Marriott Birmingham, Christian Davis, 18, of Hoover, learned his application to MTSU had been accepted … and Jennifer Davis, his mother, had cell phone photos showing his elation.

“It felt really cool,” Davis, a Hoover High School senior, said of reading the acceptance letter from MTSU. He indicated interest in audio production and, being a musician, said he planned to pursue being in the 300-plus member Band of Blue. “I want to be in a program where I can learn something new —that the education will benefit me for the future.”

Davis said a $2,000 scholarship awarded by McPhee means “funding for college will be way easier.” 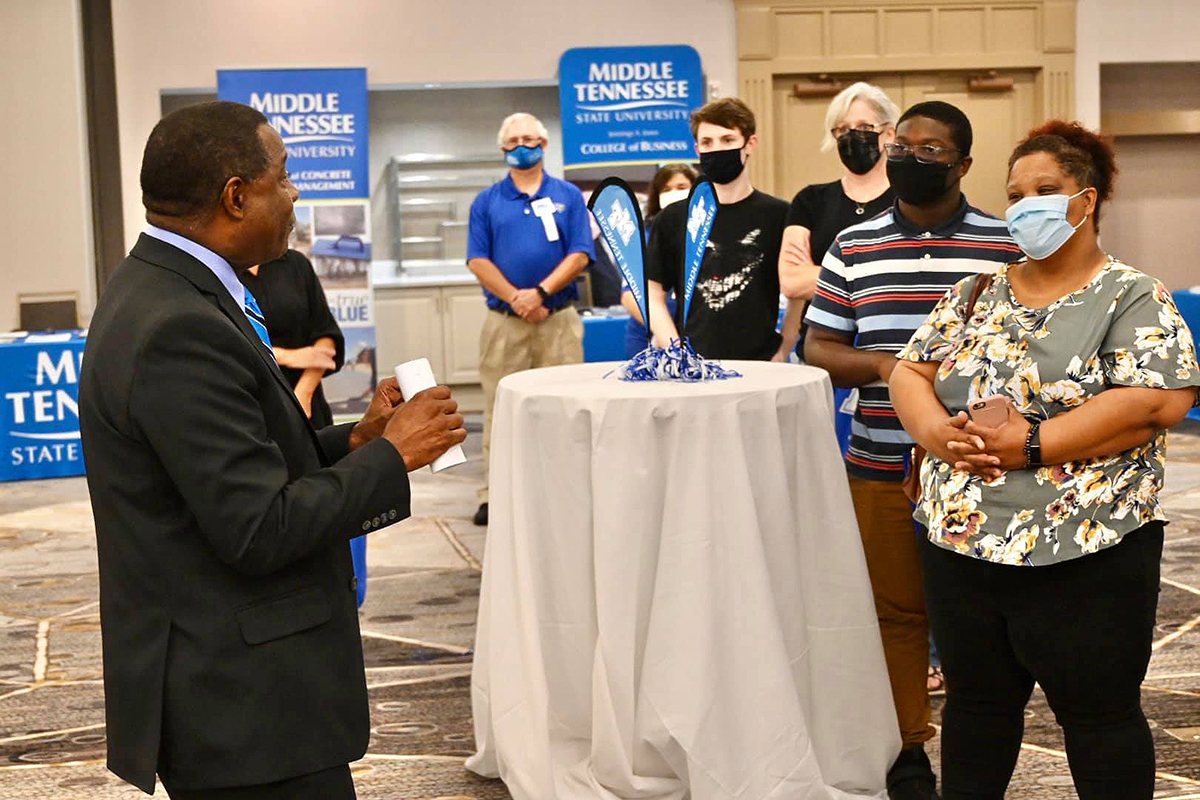 MTSU President Sidney A. McPhee, left, visits with prospective students and their parents attending the True Blue Tour event at the Marriott Birmingham in Hoover, Ala., Tuesday, Sept. 21. Listening are Jennifer Davis, right, her son Christian Davis, of Hoover, and Leigh Ann Harris and her son, Nathan Harris, of Chelsea, Ala. McPhee awarded Davis, Harris, Kyla Fulton of Pelham, Ala., and Jordan Gunter of Vestavia Hills, Ala., $2,000 scholarships. (MTSU photo by Andrew Oppmann)

McPhee shared about signature programs like aerospace, recording industry and concrete and construction management, which will move into a new $40.1 million building by fall 2022. He also mentioned the $147 million Science Buildingand $39.6 million Academic Classroom Building for students majoring in social work, psychology and criminal justice. 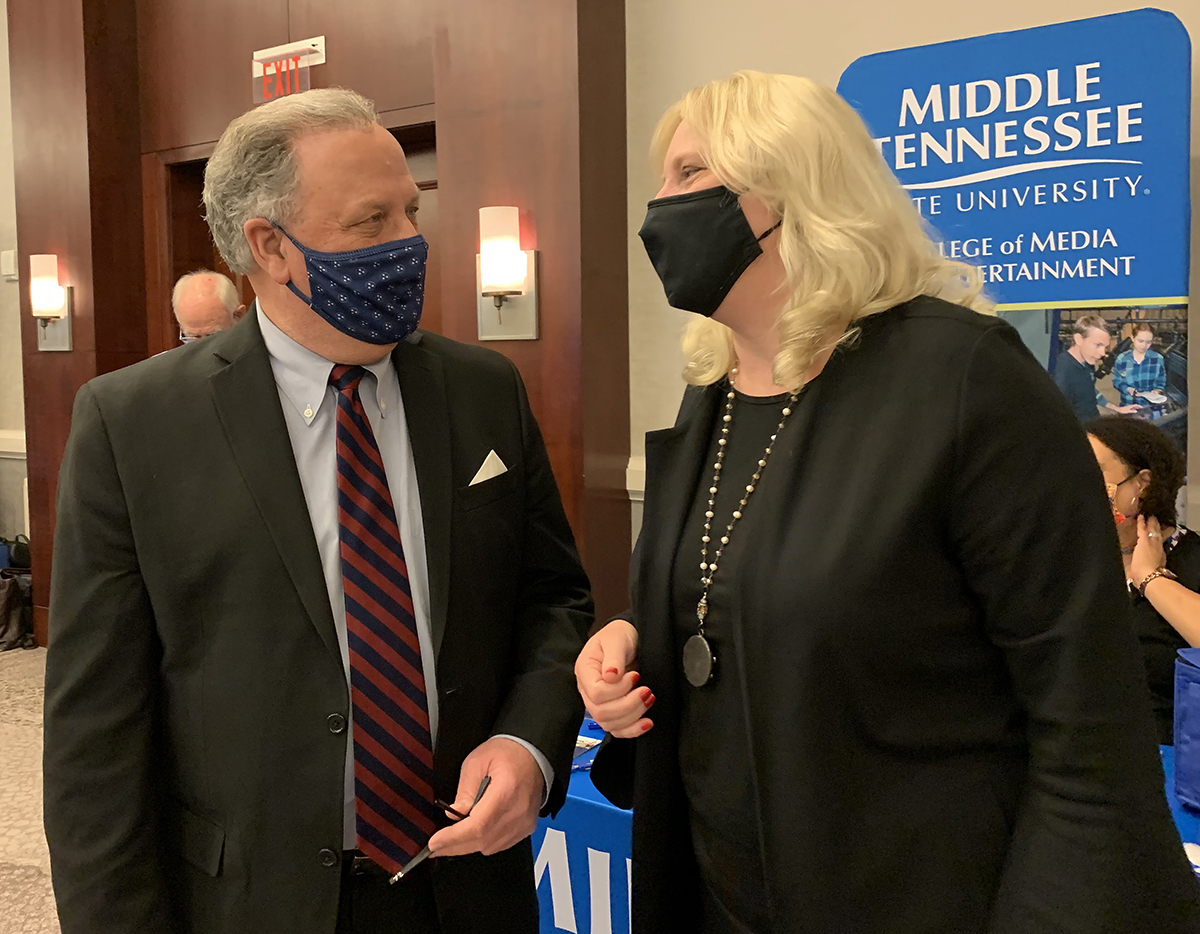 MTSU alumnus, longtime anchor/reporter and hall of fame broadcaster Jerry Hayes, left, chats with Beverly Keel, dean of the MTSU College of Media and Entertainment Tuesday, Sept. 22, at The Westin Huntsville hotel in Huntsville, Ala. Hayes has spent 41 years at WHNT-TV. (MTSU photo by Randy Weiler)

MTSU alumnus and hall of fame broadcaster Jerry Hayes, who is in his 41st year with WHNT-TV (CBS 19), told Huntsville attendees “how proud I am to be a Blue Raider and never regretted my decision to attend MTSU. … You will never regret your decision to go to MTSU. You will forever be True Blue.” McPhee invited Hayes to the stage to end the night.

Hayes, who also visited the event in 2018, visited with College of Media and Entertainment Dean Beverly Keel and Diane and Bob Davis, the parents of Claire Davis (Class of 2020), a media arts major who is a production assistant at WHNT. 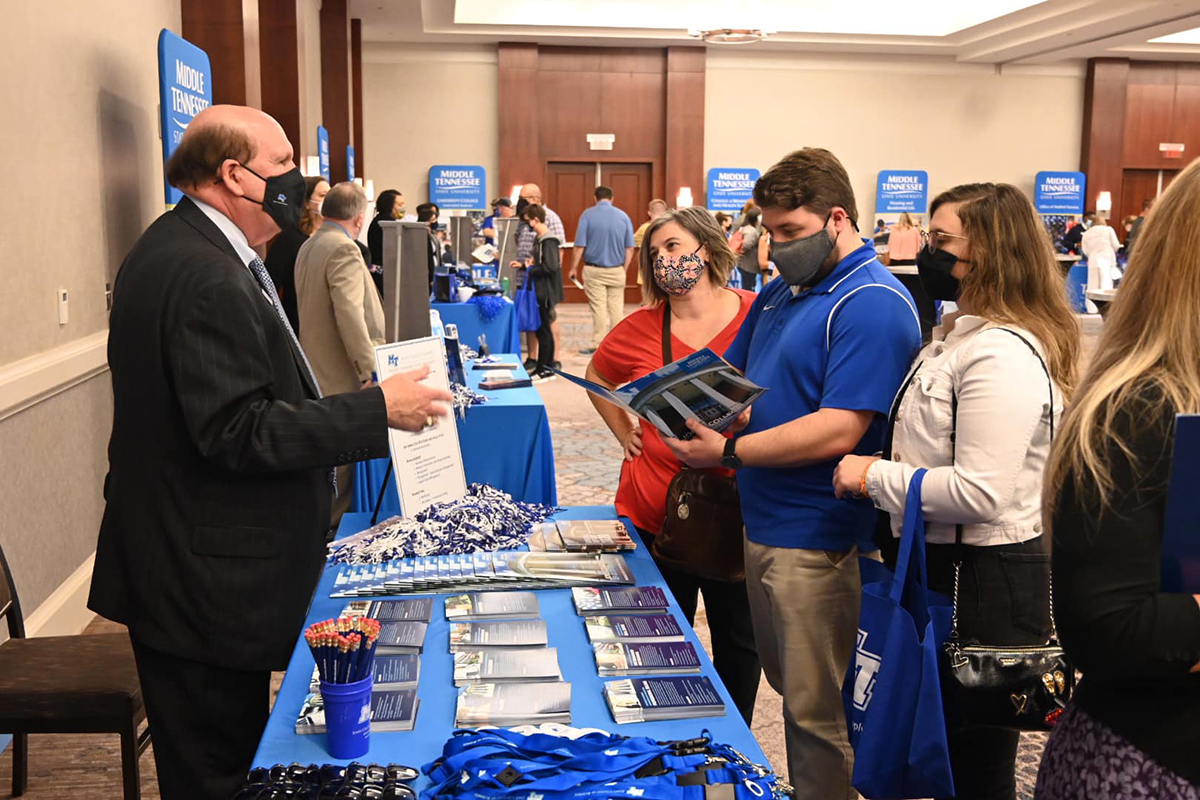 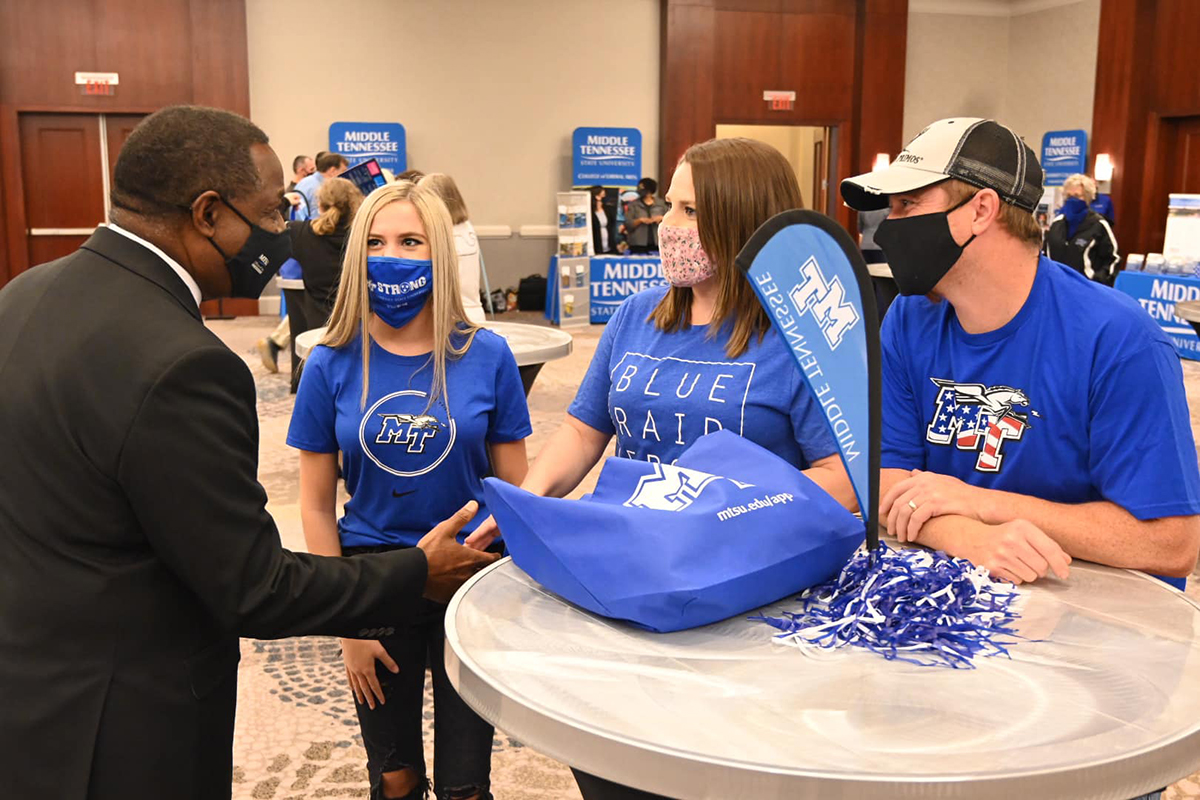 MTSU President Sidney A. McPhee meets with a prospective student and her family attending the True Blue Tour recruiting event Sept. 22 at The Westin Huntsville hotel in Huntsville, Ala. It completed a two-day visit to Alabama. MTSU’s tour events, which are free, cover four states and 14 cities. (MTSU photo by Andrew Oppmann)