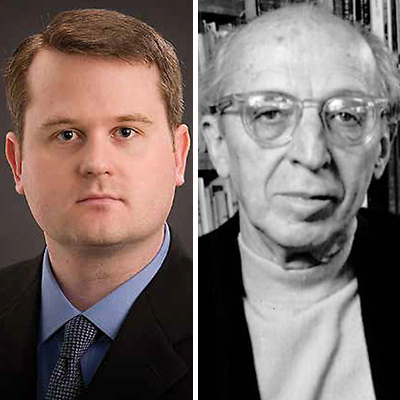 Hale County, Alabama, sharecropper Frank Tengle, right, and his family sing hymns in this 1935 photo, “Sunday Singing,” by Walker Evans that was included in James Agee’s book “Let Us Now Praise Famous Men.” Composer Aaron Copland was inspired to write his opera “The Tender Land,” the topic of a special Nov. 11 lecture at MTSU, after reading Agee’s book and seeing Evans’ photos. (Photo by Walker Evans/Library of Congress)

The lecture by Dr. Ryan Jones, associate professor at the University of Wisconsin, Eau Claire, included the origins, reception and interpretation of the work as well as Copland’s run-in with U.S. Sen. Joseph McCarthy during its composition and the hallmarks of formal design and musical style that define his artistic approach.

“My presentation demonstrates the ways in which a reading of a work from the peak of a quintessential American composer’s career — initially deemed a critical failure — may reflect his thoughts and concerns for a nation in political turmoil,” Jones said.

Dr. Joseph Morgan, professor of musicology at MTSU, said Copland’s music “is often considered the prototype of the American sound in classical music” with works like “Appalachian Spring,” “Billy the Kid” and “Fanfare for the Common Man.”

“The Tender Land” tells the story of a farm family in the Midwest, a narrative that Copland was inspired to set to music after reading James Agee’s “Let Us Now Praise Famous Men” and seeing Walker Evans’ Depression-era photographs included in it.

He composed the work between 1952 and 1954 for the NBC Television Opera Workshop, but the producers rejected it for TV, Morgan said. The New York City Opera finally premiered the work in 1954.

Copland was in the middle of composing the opera in 1953 when he was forced to testify before McCarthy’s House Un-American Activities Committee.

The composer had been added to the FBI’s list of artists thought to have communist associations but denied any affiliations, testifying, “I spend my days writing symphonies, concertos, ballads, and I am not a political thinker.”

The MTSU Opera Workshop will present “The Tender Land” next March 18 and 20 in conductor Murry Sidlin’s 1987 revival version, which effectively reduces the orchestra to an ensemble of 13 instruments.

A searchable campus map with parking details is available at http://tinyurl.com/MTSUParkingMap. Off-campus visitors attending the event should obtain a special one-day permit from MTSU’s Office of Parking and Transportation at www.mtsu.edu/parking/visit.php.