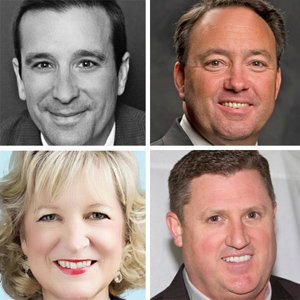 MTSU’s Jennings A. Jones College of Business recently honored four business people with awards in recognition of their contribution to business and industry.

• MTSU alumnus Scott Brisson, an executive with financial services firm UBS, received the Young Professional of the Year Award, which recognizes those who have become role models through high achievement at a relatively young age and show potential for even greater accomplishments.

The Hendersonville resident has a bachelor’s degree in management and an MBA from the Jones College of Business at MTSU. He started his career at J.C. Bradford & Co. before landing at UBS through various industry acquisitions. Brisson now serves as head of service delivery for group operations, where more than 400 employees support UBS’s Wealth Management and Investment Bank business.

• MTSU alumnus Randy Knight, vice president of manufacturing at Nissan’s Smyrna vehicle assembly plant, received the Jennings A. Jones Champion of Free Enterprise Award, which is presented to an individual whose achievements reflect the traditions of free enterprise and who are role models for others.

In his current position since 2013, Knight is responsible for the plant’s operation, including safety, quality, operations, productivity and environmental compliance. He joined Nissan in 1983 as a production technician in the Smyrna paint plant and has risen through the ranks. He holds a bachelor’s degree in business administration from MTSU, is an alumnus of Leadership Rutherford and serves on the Leadership Rutherford Council.

• Janet Miller, head of real estate services firm Colliers International in Nashville, received the Joe M. Rodgers Spirit of America Award, which is given to a business person “who has demonstrated the highest ideals in keeping with the American spirit of innovation, entrepreneurship and commitment to others.”

A key player in Nashville’s commercial real estate community for over 30 years, Miller joined Colliers in 2014 as CEO and market leader — responsible for talent development, business and brand development, and all operations — following 21 years as chief economic development officer of the Nashville Area Chamber of Commerce. Miller led the 10-county region’s top agency for recruiting companies and working with existing companies on retention and expansion projects and led a team that three times was named a top-10 economic development group in America and worked with over 400 corporations on major job-creation projects.

• David Tincher, plant manager of the General Mills plant in Murfreesboro, received the Jones College of Business Exemplar Award, which is presented to a Jones College alumnus whose personal and professional accomplishments demonstrate that future MTSU graduates can also achieve at a high level.

With degrees in electronic engineering and industrial management from West Virginia University Institute of Technology, Tincher served over 14 years as a C-130 flight engineer and maintenance officer in the West Virginia Air National Guard. He joined General Mills in 1998 as maintenance manager in Murfreesboro and has held positions of increasing responsibility. As plant manager, he led an expansion to make the plant one of the world’s largest producing refrigerated dough and yogurt.

The Jones College of Business is made up of the departments of Accounting, Computer Information Systems, Economics and Finance, Management, and Marketing. For more information, visit www.mtsu.edu/business.