In the News: Library censorshi.. 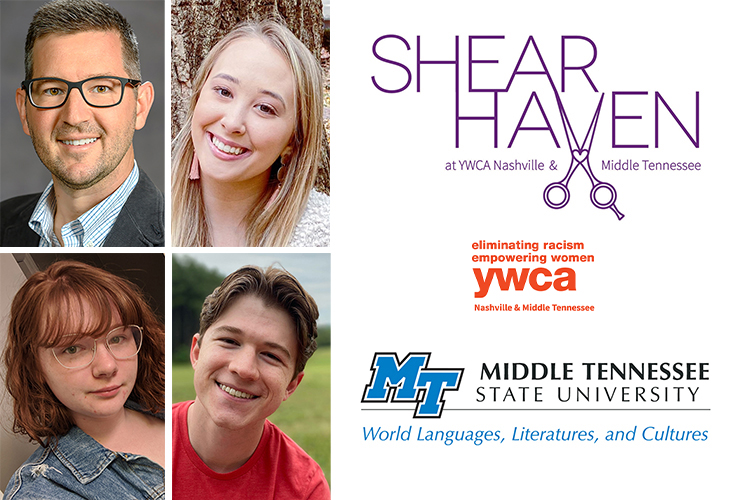 When a new state law takes effect Jan. 1, 2022, some MTSU students will be able to say proudly that they were part of a worthy cause.

Students in Alan Campbell’s Spanish translation class in the Department of World Languages, Literatures and Cultures worked on the training script for the YWCA’s Shear Haven Initiative. This online training program will teach cosmetologists how to recognize signs of domestic violence.

The law, which the Tennessee General Assembly passed in April 2021, will require applicants for natural hairstyling, cosmetologist, barber, aesthetician and manicuring licenses and certificates, as well as instructor licenses for barbers and cosmetologists, to take the one-hour course either online or in person in the new year.

Campbell’s class will provide people in the professions who are native Spanish speakers with an understandable translation of the course.

With a script and video provided by the YWCA, the students worked on the translation and the subtitles. By the end of the year, they hope to have completed the audio dubbing with native Spanish speakers.

As is the case with all translations, some words and phrases make the transition more difficult than others.

“There’s always certain slang terms or certain ‘isms’ of the English language that don’t really compute in other languages,” said Lorna Hedges, a La Vergne, Tennessee, senior who is working toward a double major in Spanish and computer science.

“When translating, you have to take into account the context,” said Jordan Marsh, a junior animation major from Shelbyville, Tennessee. “You can’t just take things too literally because then people would misunderstand them in the target language.”

That becomes even more challenging when it comes to observing the protocol of maintaining the speaker’s original meaning, thought and intent.

“A lot of the translation process really centered on how the presenter in the original video spoke, and a lot of her language was very informal,” said Owen Tadych, a senior double major in audio production and Spanish. “So, in trying to create our translation, we wanted to maintain that informality in the conversational tone.”

In addition, Spanish is not spoken in exactly the same way in every Spanish-speaking country.

“There’s just certain words that mean totally different things in Spain versus even Latin America as a whole,” Hedges said.

Nevertheless, the possibility of using barbershops and beauty salons to make inroads into a major societal problem should be a fascinating experience.

“It is a mix of a lot of the cultural and linguistic aspects of their life in both a personal and a professional sense because they do live in a U.S. English-speaking context, but they have relationships with people who are bound by different linguistic factors,” Campbell said.

While the experience enriches their education, the students find it equally fulfilling to be able to play a role in helping people in need.

“A lot of women in my life have been victims of domestic violence,” Marsh said. “It definitely touches my heart, knowing that someone’s going to see that (video).”

For more information about MTSU’s Spanish program, visit the Department of World Languages, Literatures and Cultures website at www.mtsu.edu/worldlang.

To learn more about the YWCA’s Shear Haven Initiative, visit the website at www.ywcanashville.com/domestic-violence/shear-haven.