Anna Kate Jackson stole the show halfway through the recent MTSU Engineering Technology Mech-Tech, an end-of-the-semester student project expo. That happens when children or animals move into the picture, literally.

Jackson, 3, of Lebanon, Tennessee, found herself on an up-and-down free ride — an automated forklift — designed and built by her father, J.R. Jackson and mechatronics engineering teammates Thomas Tziahanas, Chris Arnold, Arsany Ebrahim and Kylan Burse. The child became the center of attention and an immediate photo opportunity. 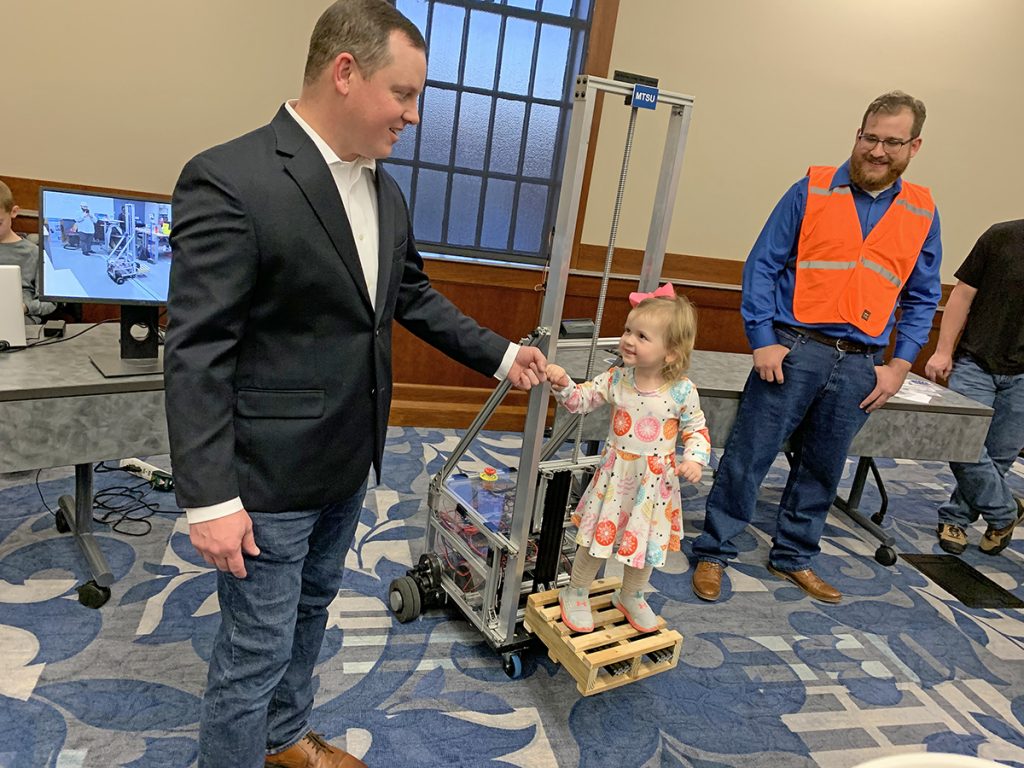 MTSU mechatronics engineering student J.R. Jackson, left, of Lebanon, Tenn., holds 3-year-old daughter Anna Kate’s hand as she rides up and down on the automated forklift his team designed and built for the recent Engineering and Technology Mech-Tech Expo. (MTSU photo by Randy Weiler)

Their collaboration was among several dozen Engineering Technology and mechatronics senior projects on display during the event, held Dec. 2 in the Sam H. Ingram Building’s MT Center on Middle Tennessee Boulevard. The expo was a celebration of the completion of their hands-on ventures.

Regarding the automated forklift, J.R. Jackson said it had been a very challenging endeavor, but, overall, a very good project.

“Some of the challenges we ran into were being able to lift the required amount, which was about 25 pounds,” he said. “As you can tell from the lifting of one of my children, it can lift about double what our original estimate was.

“We also ran into challenges with some of the motors for the wheels. The current motors and wheels are actually from my kids’ Power Wheels toys, so I robbed those from them to put on our cart.” 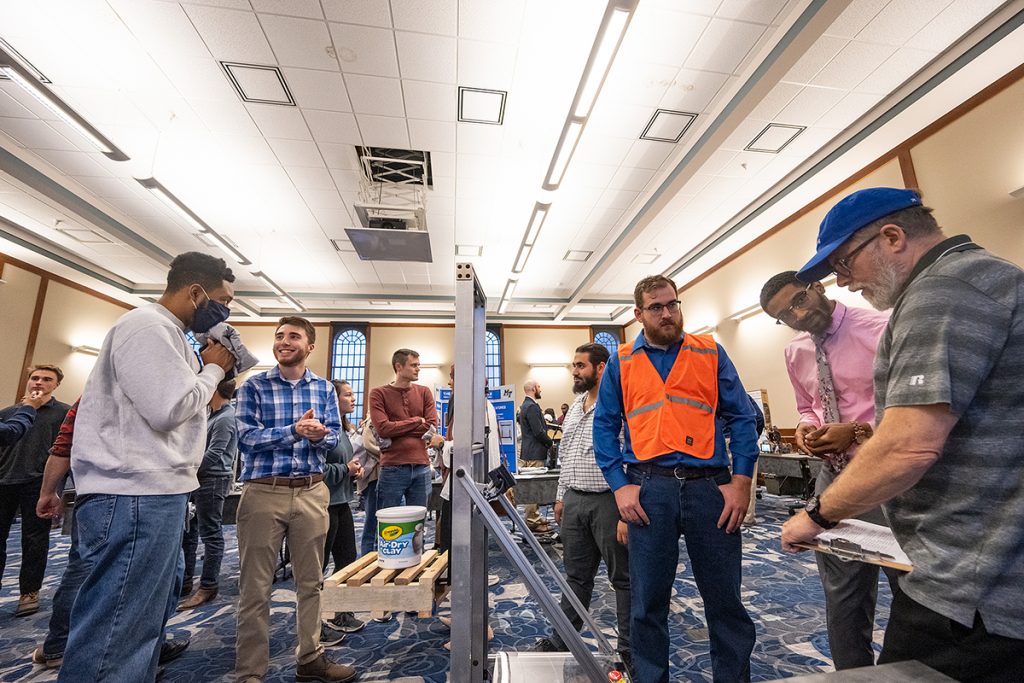 Jackson, who works at Nissan in Smyrna, Tennessee, said it was a two-semester project for the group.

“It went from a simple cart that we drove around to learn how to follow a line and how to program it to a separate fork system that wasn’t connected to finally we had to combine the two into one machine and make all of it happen,” he said. “It all happens automatically. It will follow a line, pick up a cart, determine a location and then either drop it off in a floor location or a one-meter high shelf.”

All five will graduate Saturday, Dec. 11, during MTSU commencement ceremonies in Murphy Center. He said all of them are employed or have landed jobs in industry. 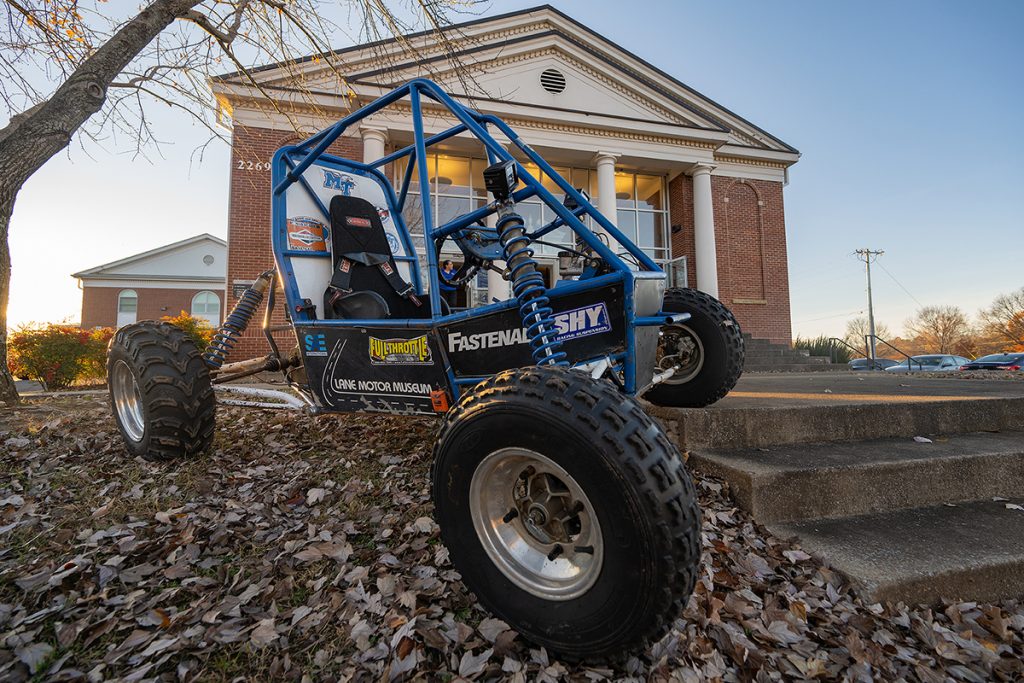 Pictured is one of two Baja experimental vehicles that MTSU Experimental Vehicles Program students drove to the recent Engineering and Technology Mech-Tech Expo and sits in front of the Sam H. Ingram Building on Middle Tennessee Boulevard. The annual event shows students’ work during the fall 2021 semester. (MTSU photo by Cat Curtis Murphy)

To learn more about Engineering Technology and its variety of undergraduate and graduate programs and mechatronics engineering, visit https://www.mtsu.edu/et or call 615-898-2776. 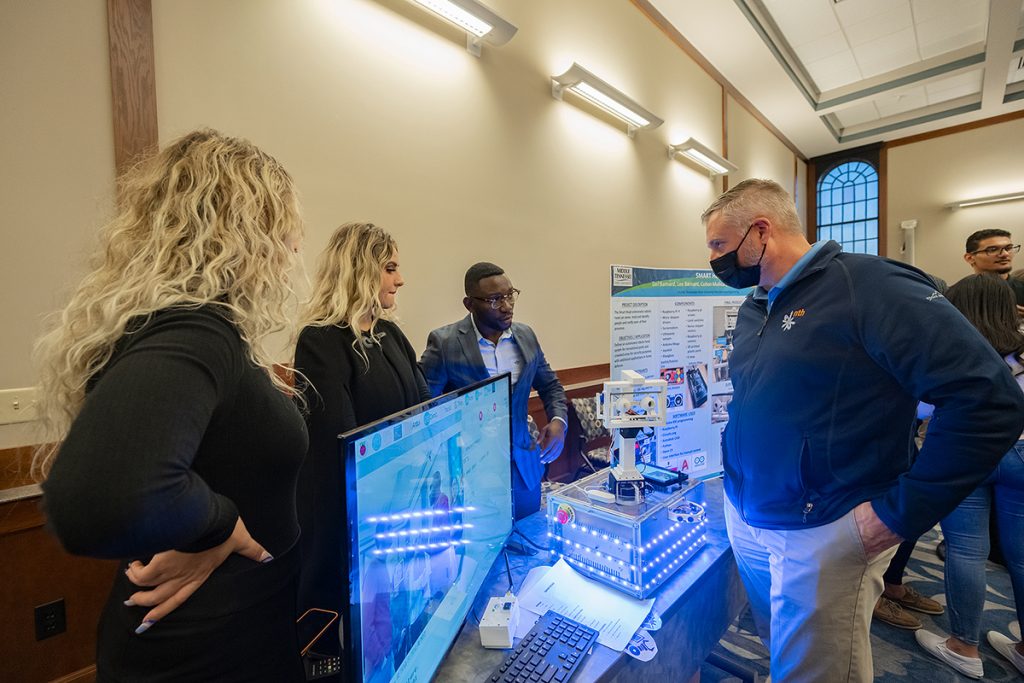