The Center for Popular Music at MTSU added two music historians’ expertise to that collection via video Wednesday, Oct. 21, when it released “Jimi Hendrix: A-Z” on its website in this 50th anniversary year of his tragic death.

The online conversation, which is available free to watch above and at http://mtsu.edu/popmusic, features author and Department of Recording Industry professor Mike Alleyne and Katie Rainge-Briggs, a doctoral candidate in MTSU’s Public History Program and a curatorial resident at the National Museum of African American Music in Nashville.

Hendrix formally began playing guitar at age 15. He was at Fort Campbell by age 19, briefly serving with the 101st Airborne, and heard about Nashville’s thriving R&B scene while playing music around Clarksville, Tennessee. His Nashville time led to touring the South with his own band and also backing artists that included Sam Cooke and Jackie Wilson.

By 1964, Hendrix had made his way to New York City, where his artistry helped him make the connections that would lead to the creation of The Jimi Hendrix Experience and the records that first brought them stardom in 1966.

His concert appearances brought him even more acclaim. His 1967 Monterey Pop set, featuring his original songs “Foxy Lady,” “The Wind Cries Mary” and “Purple Haze,” ended with Hendrix setting his guitar afire. He mesmerized the audience at Woodstock in 1969 with a psychedelic performance of “The Star-Spangled Banner.”

In September 1970, Hendrix died at a London hospital at age 27, apparently after accidentally overdosing on barbiturates.

MTSU’s Alleyne is an expert in multiple areas of popular music who served as a consultant for the late Marvin Gaye’s estate during its successful $5 million copyright infringement lawsuit against the creators of the 2013 song “Blurred Lines.”

Co-organizer of the first popular music conference dedicated to the life and career of the artist Prince, Alleyne is the author of the 2020 book “The Essential Hendrix: An A-Z Compendium” and 2012’s “The Encyclopedia of Reggae,” as well as co-editor of the 2020 book “Prince and Popular Music.”

He also contributed track notes to the upcoming nine-CD box set “The Smithsonian Anthology of Hip-Hop and Rap.”

Rainge-Briggs served as a high school social studies teacher in Los Angeles for 15 years before launching her public-history degree work.

She was a member of the school design team that developed the Responsible Indigenous Social Entrepreneurship School, or RISE, at LA’s Augustus Hawkins High School, and as an instructional leader in RISE, she developed a curriculum that helped students understand and share their cultural wealth.

The Center for Popular Music also develops and sponsors programs in American vernacular music and presents special concerts, lectures and events for the campus community. 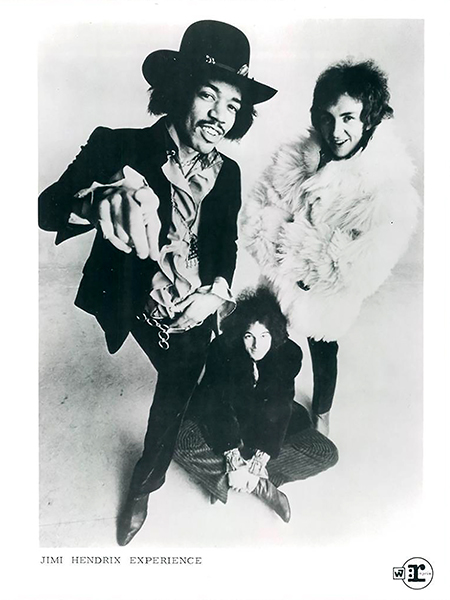 Rock legend Jimi Hendrix, at left, poses with his Jimi Hendrix Experience bandmates Mitch Mitchell, right, and Noel Redding, seated, in this circa 1966-70 publicity photo from Reprise Records. Hendrix is the subject of “Jimi Hendrix: A-Z,” a conversation between two music historians recorded by the Center for Popular Music at MTSU and available free on its website, http;//mtsu.edu/popmusic, beginning Wednesday, Oct. 21. (photo submitted)