The Center for Popular Music at Middle Tennessee State University wrapped up its inaugural series of special “unconferences” on old-time music Friday, April 16, with a live online discussion on building, supporting and growing the music community.

Center for Popular Music director Greg Reish, a music scholar and old-time musician, and global history interdisciplinarian and musician Dan Margolies  returned as hosts for this final 90-minute virtual event for the semester.

The complete video from the event is available above.

Organizers gave this spring’s gatherings the “unconference” title intending to keep the get-togethers as “radically decentered conversations,” encouraging a core group of panelists to discuss each topic with audience members who tune in online.

Decosimo, a national old-time banjo champion and prize-winning fiddler based in Durham, North Carolina, has performed and taught music workshops around the world. He’s a former faculty member at East Tennessee State University in Johnson City and holds a doctorate in American studies and a master’s degree in folklore from the University of North Carolina at Chapel Hill.

Decosimo currently performs in the old-time string bands the Bucking Mules and the Blue Ridge Broadcasters and teaches traditional music.

Enriquez studies the interactions of Latinx and Appalachian folk music and the Latinx community and migration in Appalachia and the U.S. South as part of working toward her doctoral degree in ethnomusicology at Ohio State University in Columbus, Ohio. She also works with public folklore projects to encourage building more relationships between higher education and local communities.

Enriquez also performs American folk music, including bluegrass and Mexican ranchera, and is a member of the Good Time Girls folk trio.

Richardson, who lives in Santa Fe, New Mexico, has worked for cultural organizations across the country, including several states’ arts and folk arts programs, as well as the Museum of International Folk Art in Santa Fe and the Birthplace of Country Music Museum in Bristol, Virginia. He holds a doctorate in folklore from Indiana University and lectures and teaches nationwide, often on documentary work such as audio recording and interview techniques for successful fieldwork.

Spencer lives in Lawrence, Kansas, and has been playing award-winning traditional fiddle since childhood. A multi-instrumentalist and singer who also creates visual folk art, Spencer performs, teaches and works with her husband, Texas-raised fiddler Howard Rains, as the old-time music duo Spencer & Rains and with her six-piece band, The Skeleton Keys.

The March 12 event saw an even larger audience turn out to talk with old-time and bluegrass music specialist Tatiana Hargreaves, memoirist and music critic Kimberly Mack and country music historian Amanda Marie Martinez. Their discussion is archived at https://youtu.be/0KjQG_BU73s. 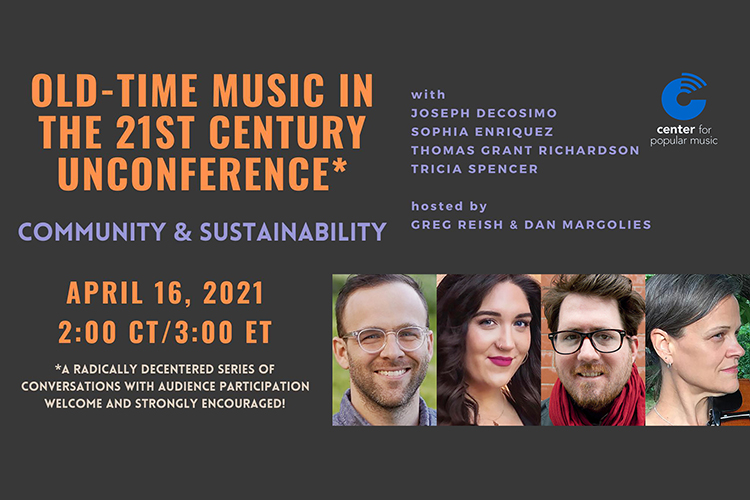