Three teenagers, two of them MTSU freshmen with “Devil Went Down to Georgia” childhood stories and a third who performed with Charlie Daniels at Volunteer Jam for his 80thbirthday, were among dozens who attended the Country Music Hall of Fame member’s second book signing in two years on campus.

For Daniels, a friend of Middle Tennessee State University and its Charlie and Hazel Daniels Veterans and Military Family Center, he has millions of fans of all ages, but they keep getting younger. 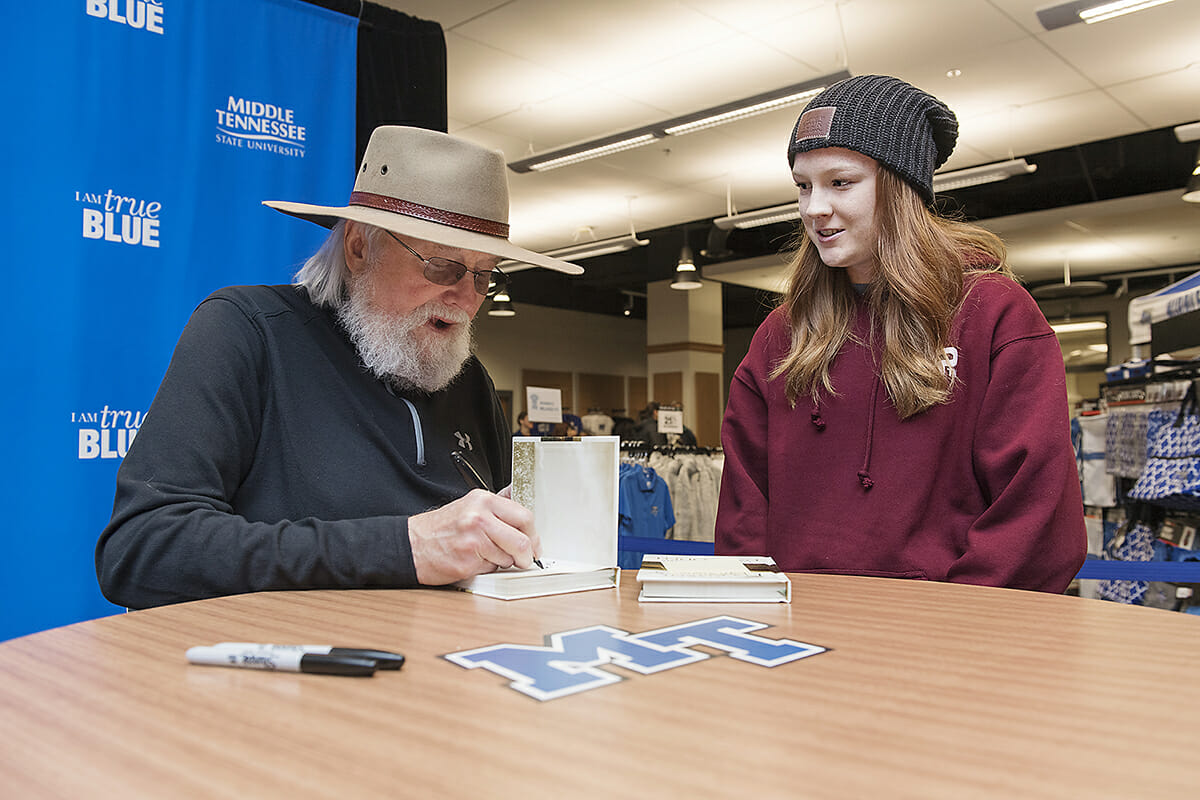 “I’m here to sign books,” Daniels excitedly announced to the crowd as he approached the area where he would sign the hardback books, plus at least one fiddle, brought by Lillian Lynch, 21, a junior aerospace technology major from Daniels’ hometown of Mt. Juliet, Tennessee.

“This was my publishing company’s (HarperCollins) idea,” Daniels said. “They wanted a gift book. They knew I was a Christian and I had been writing snippets already. For about five years, I posted a daily feature on social media called ‘Let’s All Make the Day Count.’ We added a bible verse.”

It became 100 inspirational stories that, he had just learned, had gone into a second printing because of the popularity of the author and subject matter.

Christyn Norwood, 18, of Lawrenceburg, Tennessee, an early childhood education major, was first in line, buying the memoir for her father, Jeff Norwood, and the devotional for best friend McKenna Romer, a freshman at Columbia State Community College’s Lawrenceburg campus.

Norwood and Jules Mayes, 18, a freshman from Fayetteville and Lincoln County, Tennessee, had similar “Devil Went Down to Georgia” tales — Norwood always hearing it as a child and Mayes, who now works in Phillips Bookstore and bought seven books, “begging to call in to radio stations as a 5-year-old and asking them to play it.” 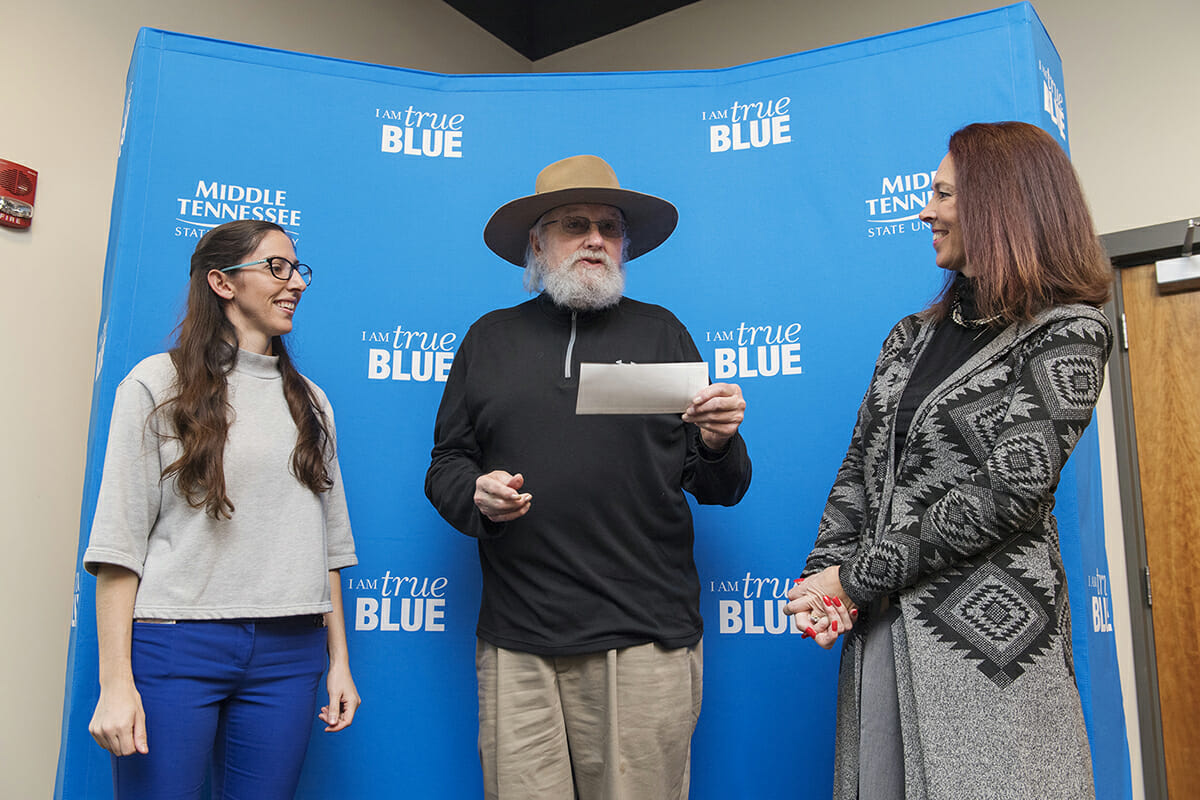 Legendary performer Charlie Daniels, center, accepts a $1,000 check for his nonprofit Journey Home Project from Rochelle Cintron, a facilities specialist with Optum, a health insurance company, which provided the gift. At left is Teana Cintron, an employee in the Charlie and Hazel Daniels Veterans and Military Family Center and daughter of Rochelle Cintron. Daniels signed copies of his new book and his 2017 memoir at Phillips Bookstore on the MTSU campus. (MTSU photo by Andy Heidt)

Virginia Lowery, associate director of counseling services, may have topped all purchasers with 10 books, saying she “has a lot of Christmas presents for a whole lot of people. … He (Daniels) is such a humble, genuine, sweet man.” While he signed, they discussed Israel, where both have traveled, and World Outreach Church, where both attend.

Savannah Maddison, 17, of Franklin, Tennessee, was invited to attend the signing as was Joe West, also of Franklin, a Grammy award-winning songwriter and producer. Maddison performed at Volunteer Jam in 2016. She is an author and singer-songwriter who started Samantha’s Soldiers at age 10. Her efforts have led school children to write more than 300,000 letters to soldiers.

Another invited guest was Daphne Frontz, transition to trades specialist with Hiller Plumbing, Heating, Cooling and Electrical, which will be the primary sponsor for the second MTSU Veterans Impact Celebration in June 2019. 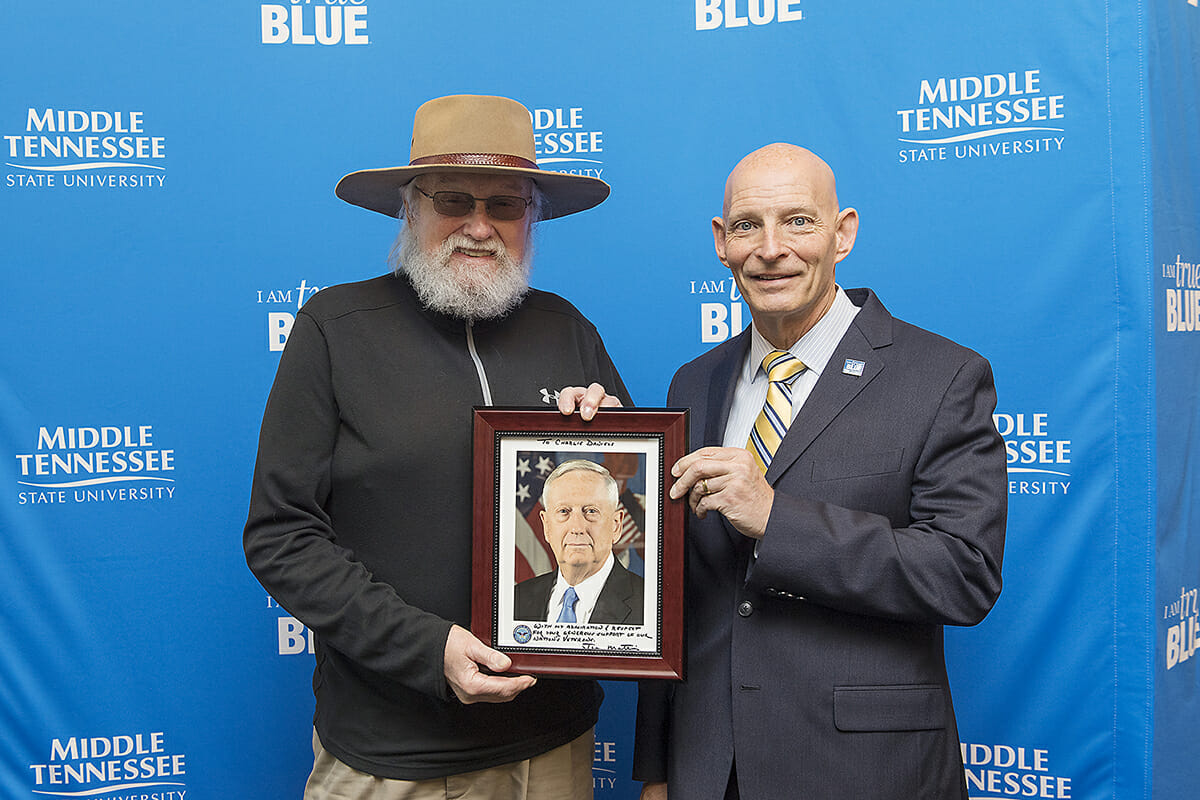