In the News: Corporate welfare.. 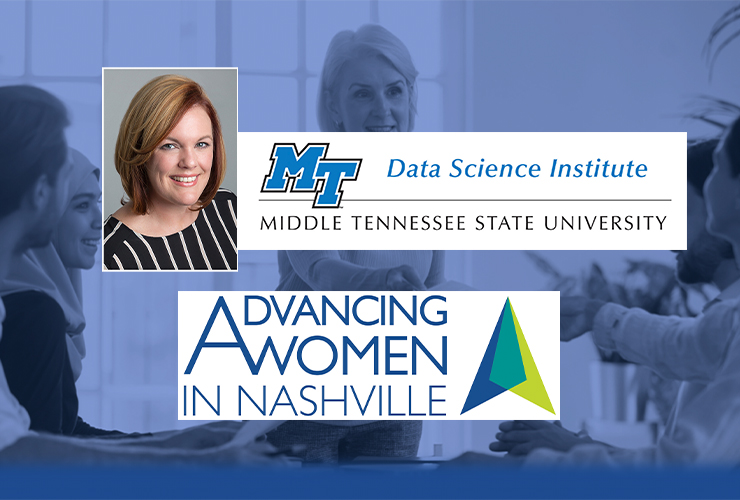 NASHVILLE, Tenn. — Women professionals in the Midstate region are slightly better represented within the managerial ranks compared to the state or nation, but issues such as child care access and parental responsibilities pose challenges for increasing that gender diversity in the executive leadership ranks.

That is among the key takeaways from a report by MTSU’s Data Science Institute in partnership with the women’s professional advocacy organization Advancing Women in Nashville, or AWIN, which commissioned the report to analyze gender representation in 31 managerial occupations for the Middle Tennessee region.

The report analyzes job volume, compensation, growth (past and present), and demographic data to understand the local managerial workforce better. It is the second installment in this research effort, the first of which was published in 2019.

MTSU information and analytics professor and report author Amy Harris, Ph.D., presented the latest report’s findings at a recent AWIN conference as the organization seeks to establish benchmarks about gender representation in an overall workforce that is essentially equally proportioned male-female.

“If you really want to quantify (the state of affairs) and process it over time, you really need the data,” Harris said. “With gender representation, it’s roughly 50-50 in the workforce … but when you focus in on managerial occupations, that balance is off. … There’s a gap there.”

Harris’ analysis found women in the region hold just over 41.4% of management positions — slightly higher than nation (40.4%) and state (41.2%) — compared to 58% for men. That gap widens even more when talking about chief executive positions.

“Dr. Amy Harris and the MTSU data science team have been great partners for Advancing Women in Nashville in completing this study for the second time,” said AWIN Executive Director Eve Hutcherson. “We believe that authentic progress begins with good data, so we are happy to join with MTSU in sharing the results of our study.

“This project is a key element of our mission of advocating for the advancement of women in business leadership roles, as it paints a very important picture of where our region stands today. While the Nashville area clearly has certain strengths in some areas and has shown some improvement, this study tells us there is still major ground to gain.”

Harris said the pandemic has highlighted the “structural barriers” such as lack of adequate and affordable child care that has prevented many women from reentering the workforce — “you can’t go to work if you don’t have child care” — coupled with one of the data points in her report: the managerial position with the highest female representation and lowest compensation was preschool administrators. 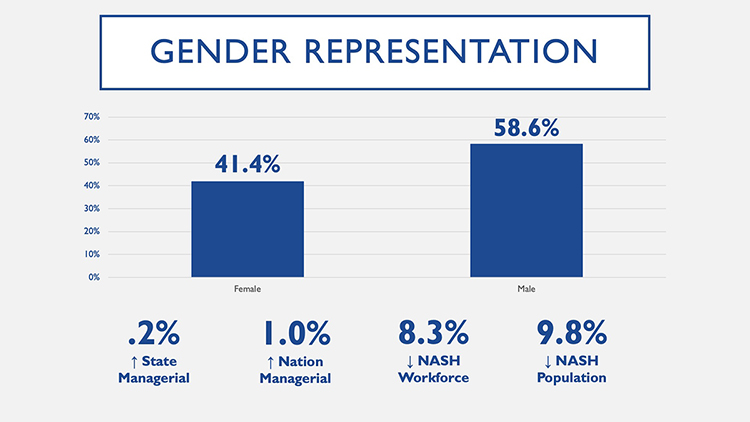 This slide shows results of a report from MTSU’s Data Science Institute that was commissioned by the advocacy organization Advancing Women in Nashville that looked at gender diversity within the managerial ranks in the Midstate area. (Graphic courtesy of Dr. Amy Harris, MTSU Data Science Institute)

On top of that, there were fewer of those jobs available since the previous study and the median salary had dropped significantly as well.

“We absolutely have a crisis of child care,” Harris said. “If you have this population of women who want to climb the corporate ladder, you can’t do that without proper child care, you just can’t. … I think as a society we have to make a shift.”

Harris noted that the educational pipeline from colleges such as MTSU into the workforce isn’t the problem, with recent studies showing women attending and earning college degrees in significantly higher numbers than men in recent years, a trend that is expected to continue.

“The education pipeline isn’t the problem. It’s how do we support adults who are trying to start their career while also starting a family and having to deal with these competing demands?” Harris said. “

The full report is available for download at https://advancingwomeninnashville.com/advocacy.

• The managerial occupation with the highest female representation (78.9%) is education administrators, preschool and child care center/program. This occupation also has the lowest median compensation in the Nashville MSA ($40,176) and ranks fifth in terms of racial diversity with 23.7% of jobs held by non-white workers. The median salary for this occupation declined 15.3% from the previous reporting period.

• The occupation with the lowest female representation (9.8%) is architectural and engineering managers. It has the second-highest median salary at $125,901 while ranking 26th in racial diversity, with 11.3% of jobs being held by non-white workers.

• The managerial occupation with the greatest number of jobs in the Nashville MSA is general and operations managers, comprising 24.7% of all managerial occupations. Women occupy 32% of positions within this occupation, a slight increase from the percentage reported in the previous study (30.9%). It ranks 23rd in terms of female representation and 20th in terms of racial diversity, with 13.8% of jobs held by non-whites.

For more information, contact Harris at amy.harris@mtsu.edu or Hutcherson at eve@advancingwomeninnashville.com.