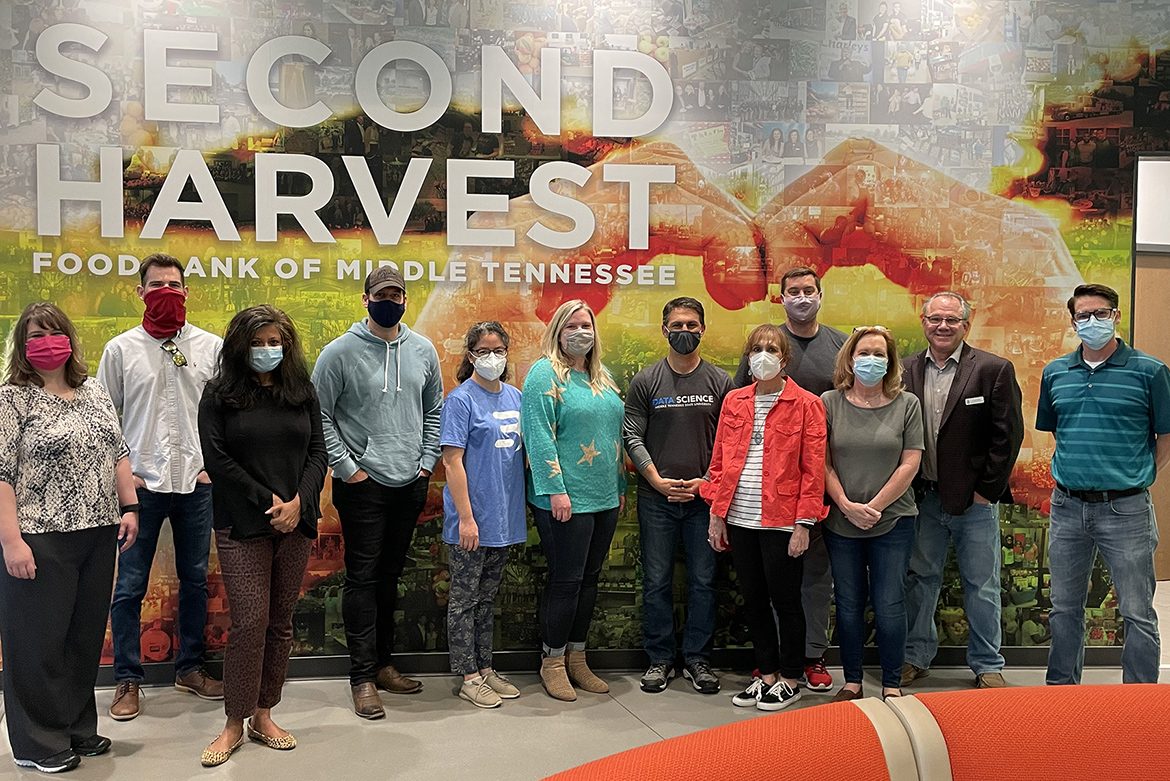 “Big data” is making big strides at Middle Tennessee State University, with the university’s first cohort of students set to earn a new data science graduate certificate in May following the fall launch of the program.

Charlie Apigian, co-director of the MTSU Data Science Institute, said a critical component of the program is real-world, hands-on experience. That’s why this first cohort is working on a project in partnership with Second Harvest Food Bank of Middle Tennessee, which provided “real data” from its operations for the students to study.

“Our main mission in terms of data science is taking complex data and turning it into actionable information that can add value to an organization,” said Apigian, an information and analytics professor. “Where it becomes important is that students have to understand that whatever model they create, it actually has to mean something.”

And such skills can be invaluable in a job market where entry-level salaries average $70,000 to $85,000 for “data scientists” skilled at analyzing and interpreting mountains of data. That’s increasingly important in a Nashville and Midstate region home to growing health care and financial services companies, logistics and similar industries “that are data driven and are in search of an adequate workforce skilled at handling data for business purposes.”

“Right now, they can’t hire enough people in data science, computer science and information systems to keep up with the demand,” Apigian said. “So they’re hiring people from outside. If we don’t have the programs here, the really smart kids from our area are leaving the state. We don’t want to lose those kids anymore.”

MTSU’s strong investment into data science in recent years has quickly morphed from a Data Science Institute launched a few years ago; to an undergraduate degree and graduate certificate program started this past fall; to incorporation of data science into its doctoral program in computational science — and hopefully a master’s degree by 2022.

And the graduate certificate courses would be incorporated into the proposed masters’ program, making for a seamless transition for students interested in pursuing the advanced degrees.

“We know if those kids stay here and go to MTSU, they will be the skilled workforce of the future for the Middle Tennessee region. We have to meet the demand and create that homegrown talent pool,” Apigian said.

The final class of the first graduate certificate cohort is being taught by institute co-director and biology professor Ryan Otter, project manager for the class, while Apigian meets with the cohort on Sundays as “the help desk” to assist with problems surrounding coding and other technical challenges.

Student and alumnus Vince Herbert, 32, who lives outside Austin, Texas, said the faculty support within the program “has been unbelievable. Their commitment to students is really unmatched, and it’s something that not every school has. I highly recommend it for people, even if they don’t have an analytics background.”

Herbert said he was drawn to the program because he uses data a lot as a program manager in supply chain management at tech giant Apple, a role he’s served for about two years. The Missouri native earned his MBA from MTSU in 2018 and enjoyed his analytics course during that time. The graduate certificate program reenforced that interest, and he plans to pursue a master’s in data science if such a proposed program is approved at MTSU.

“After the first week in the program, I was able to apply these techniques at work,” said Herbert, whose wife also graduated from MTSU with a psychology degree. “After a few days, you start seeing how beneficial and how impactful it can be.”

The new program builds foundational knowledge and skills on programming and data science techniques, he said, then transitions to a project like Second Harvest where students are actually able to apply those skills in a real-world situation.

“That’s the most important thing. No one has perfect data,” he said. “They’ve really given us the ability to use these techniques and bring these ideas to them to try to solve problems.”

Apigian said the class has met weekly virtually with MTSU alumnus David Tinsley, director of information systems and information technology at Second Harvest, and Frank Ellmo, senior director of operations, who “has been fantastic telling us some of different objectives we could help solve problems using the data.”

Tinsley said that in addition to hoping students can discover trends or “valuable insights” that could help the nonprofit’s operations, Second Harvest is also pleased to be a resource to help students gain valuable hands-on experience in the world of data science.

“It’s tricky, it’s hard to figure out, it’s nerve-racking, but that’s how it works,” said Tinsley, who graduated from MTSU in 2005 with marketing degree and an MBA in 2007. “I think this is a great opportunity for them to get to do that because we have a number of databases that we can share.

“It’s fun to have a classroom of students looking at something, because they all have different perspectives,” he added. “Some of them have warehouse backgrounds so they ask really good questions.”

‘Everything is focused on data’

Apigian noted that MTSU’s Data Science Institute has had relationship with Second Harvest since the institute’s founding in 2018 and also collaborated with the nonprofit at the 2019 HackMT event as well as a “Data Dive” hackathon event that same year.

“We reached back out to them this year because we knew that we were going to need data for a meaningful project for the final class in the graduate certificate,” he said. “We want to give people data skills, the everyday person who wants to get ‘upskilled’ with the right data science techniques to advance in their careers.”

That’s the hope of student Beverly Meadows, 56, of Dyersburg, Tennessee, who works as coordinator of a remedial math program through the Tennessee Board of Regents and its community colleges. More than three decades removed from earning her bachelor’s in accounting, Meadows learned about the data science certificate program through a news release published by an area TV news station.

“I had been looking for something to enhance my skills,” Meadows said, noting that she felt further career advancement within higher education or even a return to the private sector would require her to upgrade her knowledge and skills. And with three adult children charting career paths of their own, Meadows felt the time was right for her to reenter the classroom, even a virtual one.

“I think I chose this to pursue because I see that everything is focused on data and the interpretation of data, no matter what business you are in,” she said. “This program gives you such a wide variety of skills and opens some doors.

“I do like the real-world experience,” Meadows added, noting that her previous work experience in warehouse logistics made the Second Harvest project particularly interesting for her. “I’ve been excited about this portion of the project because I felt like I had something to give to the project.”

Apigian said the certificate program was developed pre-COVID to be online based, with the institute working with the Learning, Teaching & Innovative Technologies Center to structure a class where all four instructors — Apigian, Otter, Lisa Green and Scott Seipel — provide input at some point during each class.

Like Herbert, Meadows praised Apigian, Otter and the other professors for making the new program launch successful while navigating the uncertainties brought about by the pandemic. “I just feel like there’s been a real cooperation and everybody having empathy for everyone’s situation and the uncertainty we were working in,” she said.

Before the pandemic, the intent was for students to do an in-person, eight-hour data hackathon in the sixth week of each class, which would substitute for the traditional final exam given for most courses. Because of COVID-19 restrictions, the first cohort did those hackathons virtually with the intent to start in-person events this fall, Apigian said.

Other institute collaborations have included The General Insurance, Dollar General and Special Kids as well as a partnership that started this semester with the Tennessee Department of Human Services.

With the Special Kids collaboration, students looked at the nonprofit’s donor data and discovered that the biggest predictor of future donations from a donor “was sending a thank you note,” a practice that was implemented thereafter, Apigian said.

Another cohort of students started for the spring semester and will finish in August.

For more information about MTSU’s Data Science programs, visit https://www.mtsu.edu/dsi/programs.php or email Apigian at Charles.Apigian@mtsu.edu or Otter at Ryan.Otter@mtsu.edu.