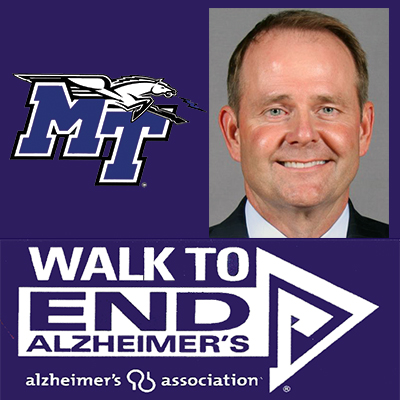 The Oct. 24 event, set to begin at 9:30 a.m. after an 8 a.m. registration and 9 a.m. starting ceremony, is being held at MTSU’s Soccer and Track Field on the north side of campus.

Davis, who is serving as corporate chairperson for this year’s walk, and the MTSU men’s basketball team will be joined by hundreds of community supporters to help raise awareness and funds for Alzheimer’s care.

Rutherford County is one of 600 communities across the country that conducts the annual walk.

Alzheimer’s disease is a growing epidemic and is now the nation’s sixth leading cause of death.

Experts predict the number of individuals living with Alzheimer’s disease will increase well beyond the current 5 million-plus Americans to as many as 16 million by 2050.

“I’m walking to help reclaim the future for millions,” Davis said on his fundraising page. “By participating in the Alzheimer’s Association Walk to End Alzheimer’s, I’m committed to raising awareness and funds for Alzheimer’s research, care and support. “

You can get more information about Saturday’s walk, including a map, here.