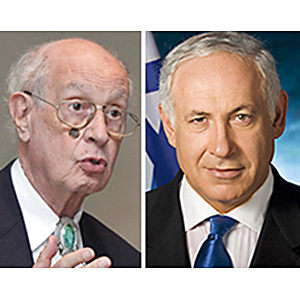 In an interview before his address at the 12th biennial MTSU Holocaust Studies Conference Thursday, Oct. 22, in Murfreesboro, Weinberg rebutted Netanyahu’s claim that the Grand Mufti of Jerusalem, Haj Amin al-Husseini, talked Hitler into implementing the so-called “Final Solution” of killing Jews, the systematic genocide known as the Holocaust, at a 1941 meeting in Berlin.

“Hitler was calling for extermination, and he used the German word for this, in April 1920,” said Weinberg, a professor emeritus of history at the University of North Carolina at Chapel Hill.

Weinberg further refuted Netanyahu’s remarks, which the prime minister made to a group of Jewish leaders in Jerusalem Oct. 20, by stating that between 300,000 and 800,000 Jews had already been killed by the time Hitler met with al-Husseini, a Nazi sympathizer.

“So this is a 100 percent fabrication which turns the conversation upside down,” explained Weinberg. “It was Hitler who told al-Husseini that the function of the German army in the Middle East was to kill all Jews.”

Netanyahu’s comments ignited a firestorm of outrage not only among Palestinians and opposition Israeli leaders but among Holocaust scholars worldwide.

In his featured address to Holocaust and genocide scholars in MTSU’s James Union Building, Weinberg praised scholars involved in Holocaust studies for continuing to ensure that future generations become aware of this significant historical period.

“For the current generation of youngsters in school, both the fighting of World War II and the Holocaust are essentially as remote as the events of the American Revolution, but appear to be nowhere near as important for their lives and their society,” he said.

Click on the graphic to see the full 2015 Holocaust Studies Conference schedule.

Weinberg observed that the passage of 70 years since the end of World War II and the ongoing deaths of survivors and liberators place a special burden on scholars to put the facts into context and explain their relevance in the 21st century.

“We’re the ones who know something about this, and, especially, we know in some detail how a society can go horrendously wrong in spite of prior fine traditions and a high level of education,” said Weinberg.

“The reality that the events of the Holocaust recede into an ever more distant past does not eliminate the possibility that other societies on any continent could move in a similar direction.”

The MTSU Holocaust Studies Conference, which began Oct. 21 and runs through Friday, Oct. 23, brings together scholars from around the world to share knowledge about the Holocaust and other genocides, past and present.

You also can visit the conference website, which includes the full schedule, at www.mtsu.edu/holocaust_studies/conference.php.