The granting of an honorary degree, a tradition of universities dating back to the Middle Ages, is higher education’s most significant accolade. Such degrees honor those with sustained records of achievement who have made outstanding contributions and who exemplify the ideals for which a university stands. They are not lightly given. It is a university’s ultimate sign of respect.

Bart Gordon is a third-generation Blue Raider. At MTSU, he was elected president of the Associated Student Body. He graduated with honors in 1971 and served in the Army Reserves from 1971 to 1972. He graduated from the College of Law at UT–Knoxville in 1973. From 1974 to 1983, he practiced law in Murfreesboro and worked for the Tennessee Democratic Party. In 1984, Gordon was elected to Congress as representative of Tennessee’s sixth district. 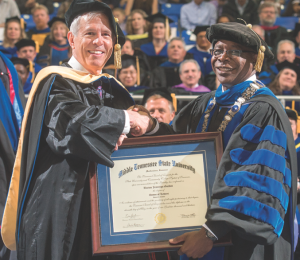 During his 26-year congressional career, he developed a reputation as the undisputed bipartisan leader in innovation policy. As chair of the House Science and Technology Committee, Gordon helped pass 151 bills and resolutions, all bipartisan.

He led the effort to enact the Energy Independence and Security Act of 2007, which increased mileage standards, improved vehicle technology, promoted alternative energy research, and improved energy efficiency in a variety of ways. He was a leading proponent of America’s space program and championed the America COMPETES Act promoting federal investments in innovation to make the U.S. more competitive.

He counts the Methamphetamine Remediation Research Act, the 911 Improvement Act, and the Garrett Lee Smith Memorial Act (aimed at curbing youth suicide) among his legislative achievements. Gordon cowrote the Family Medical Leave Act in 1990, which was signed into law in 1993 by President Bill Clinton. Gordon also wrote the Sports Agent Responsibility and Trust Act, which protects amateur athletes from abusive contract practices, and helped pass laws regulating 1-800 and 1-900 numbers for the first time.

Gordon has been a champion of expansion and improvement at Stones River National Battlefield, and he wrote legislation creating the Tennessee Civil War National Heritage Area. He also helped make possible the Discovery Center at Murfree Spring, Murfreesboro’s greenways and improvements to Oaklands Historic House Museum.

For 20 years running, Gordon was known as “the fastest member of Congress” by virtue of his victories in the Capital Challenge, an annual three-mile race for charity.

When he retired from Congress in 2011, Gordon joined the law firm of K&L Gates as a partner. In 2012, he was awarded an honorary Doctor of Laws degree by Rensselaer Polytechnic Institute in New York. Later that year, the government of France awarded him the Legion of Honor with an added promotion by the president to the rank of Officier.

Buchanan, who died earlier this year at age 93, is the only MTSU alumnus so far to win the honor. A stridently independent thinker, Buchanan earned the Nobel for “his development of the contractual and constitutional bases for the theory of economic and political decision making.” Within the economics discipline, his contribution is known as the field of public choice, which brings the tools of economic analysis to the study of public decision making. Buchanan once wrote, “If Jim Buchanan can get a Nobel Prize, anyone can.”

Buchanan also completed a graduate fellowship at UT–Knoxville and an economics fellowship at Columbia University. Following naval service in the Pacific, he earned his doctorate from the University of 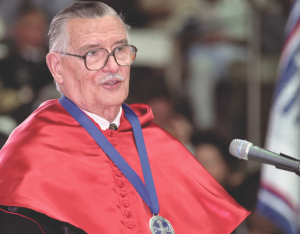 Chicago. Dr. Buchanan wrote and lectured around the world into his 90s. He spent much of his academic career in Virginia, first at the University of Virginia, then at Virginia Tech, where he established the Center for the Study of Public Choice. Buchanan and the Center moved to George Mason University in 1983. He retired in 2007.

While visiting MTSU in 1997 to address students, Buchanan said, “Economics . . . requires expository writing skills, logical structures of analysis, and a grounding in ultimate reality. And political economy, the branch of moral philosophy from which economics springs, requires philosophical coherence. I came away from Middle Tennessee with all of these.”

Speaking at MTSU’s commencement in May 2000, Buchanan challenged graduates to question the day’s political leadership.

“An open politics makes no distinction between the Ivy Leagues and the bush leagues when it comes to telling us what we want our government to do. The people, yes, but all the people, treated as equals, and not some more equal than others.”

In 2006, President Sidney A. McPhee established the Buchanan Fellowship program in the University Honors College to attract top scholars from across the state and country. Only a limited number of applicants are selected each year as Buchanan Fellows, the highest academic award given to an entering MTSU student.

SIDEBAR: Eyes on the Prize

Just prior to the commencement ceremony in which Buchanan was awarded an honorary doctoral degree from MTSU, Buchanan’s family gave his Nobel Memorial Prize in Economic Sciences to MTSU on a perpetual loan basis.

In addition, a $2.5 million bequest from Buchanan’s estate was announced. The gift is earmarked for MTSU’s Honors College. It is the largest donation to the Honors College. In 2002, brothers Lee and Paul Martin Jr. gave $2 million to the university to help construct the building that bears their late father’s name.

Until his death, Buchanan had been a significant financial supporter of the Honors College for many years. His funding provided the Buchanan Fellows program, the highest scholarship offered by the university.

Stemming from the gift, MTSU and George Mason University in Fairfax, Va., will explore a potential partnership” being called The Buchanan Papers Project, a Collection of the Papers of James M. Buchanan, that McPhee said will “create an exceptionally accessible and complete record of Dr. Buchanan’s work.”

A portion of the bequest will also be used to establish the James M. Buchanan Lecture Series: Applying the Ideas of James Buchanan in Today’s World, McPhee said.