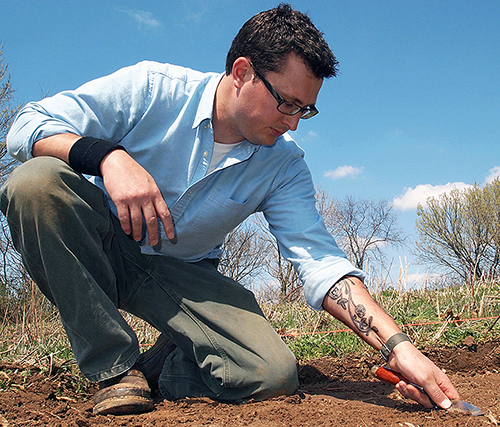 When it comes to tattoos, Aaron Deter-Wolf sees the whole picture.

The MTSU adjunct anthropology professor shared his expertise on the oldest known human tattoos in existence on “NOVA’s Iceman Reborn,” an episode of the PBS science program “NOVA” that aired locally Feb. 17 on Nashville’s WNPT-TV Channel 8.

The program asked Deter-Wolf, who also is a prehistoric archaeologist for the Tennessee Division of Archaeology, to explain his recent discovery that corrects a widely believed mistake in the academic and historical record.

Along with an international team of academics, Deter-Wolf disproved the conventional wisdom that a mummy from the Chinchorro culture found in 1983 in Chile had the oldest tattoos on record.

The true record-holder is a 5,300-year-old mummy nicknamed “Ötzi the Iceman” because he was discovered in the Ötzal Alps mountain range within 100 yards of the Austria-Italy border in 1991.

Ötzi’s remains have 61 tattoos, which Deter-Wolf theorizes were created in search of relief from arthritis, gall bladder trouble and other medical problems Ötzi suffered rather than for decorative purposes.

Ötzi the Iceman, a 5,300-year-old mummy discovered in 1991 within 100 yards of the Austria-Italy border, bears the oldest known evidence of human tattoos. The refrigerated mummy is sprayed with water, encasing the corpse in a cocoon of ice simulating the glacial conditions that have preserved him for centuries. (Photo courtesy of the South Tyrol Museum of Archaeology)

“For the most part, they line up with places on his body where he had ailments or injuries,” Deter-Wolf said.

This leads Deter-Wolf to believe that tattooing as a practice might have begun as a therapeutic endeavor and later evolved into the more artistic profession it is today.

Deter-Wolf said the “ink” was a pigment made of fireplace ash and soot. How it was applied is anyone’s guess, but it was applied quite deeply onto Ötzi’s body.

“The epidermis is gone, but the tattoos are still there, and that’s because they’re sitting right at the surface of his dermal layer, that second layer of skin,” said Deter-Wolf. “If they’d been on the epidermis, they would have disappeared with that layer of skin.”

Since most of Ötzi’s tattoos are underneath areas covered by clothing for humans of the period in which he lived, Deter-Wolf believes that Ötzi had some help in changing his appearance.

“I expect that it’s broadly cultural for no other reason than that some of his tattoos are on locations where he could not have done them himself,” Deter-Wolf said. “Someone else had to put these things on him.”

Ötzi’s mummified remains are preserved at the South Tyrol Museum of Archaeology in Bolzano, Italy. He is kept in a freezer that simulates the glacier that preserved him so well for thousands of years.

You can watch the complete “Iceman Reborn” show here on the PBS website with a membership. Deter-Wolf first appears around the 29:30 minute mark in the show, but be sure to watch the entire program.

Deter-Wolf is teaching Introduction to World Pre-History this spring. In the fall 2016 semester, he will teach his Archaeology of Tattooing class. For access to his writings, go to http://tdoa.academia.edu/AaronDeterWolf. He can be contacted at aaron.deter-wolf@mtsu.edu.

Aaron Deter-Wolf inspects an archaeology site in this photo from the Tennessee Division of Archaeology.

This photo of “Ötzi the Iceman” clearly shows ink markings on the wrist and left hand of the 5,300-year-old mummy. (Photo courtesy of Aaron Deter-Wolf)