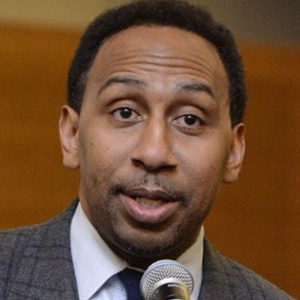 MTSU’s Black History Month 2016 keynote speaker encouraged his audience to build on the progress of their predecessors instead of only looking back at those accomplishments.

In an address before a standing-room-only audience at MTSU’s Student Union Feb. 17, ESPN commentator Stephen A. Smith said Black History Month “should be about reminding you of what your obligation is, not just reminiscing about what theirs was and how they lived up to it.”

Noting the students’ great opportunity in pursuing a college education, the popular, outspoken panelist of “ESPN First Take” on ESPN2 urged them not to associate with people who bring them down and prevent them from achieving their goals.

Targeting young men in particular, Smith asserted that female students are passing them by because the women do the hard work necessary to succeed in the classroom and graduate. He also reminded men that women won’t stay around unsuccessful men for very long.

On the subject of society’s racism, Smith said that while it’s important to stand up against racism when it occurs, “everything ain’t the white man’s fault.”

His “real world” advice also included a glimpse at what students can expect when they enter the job market.

“Corporate America doesn’t give a damn about you,” said Smith. “It does not care about your feelings. It wants productivity, and whoever doesn’t produce is going to be pushed out and the way is going to be paved for somebody else to step into your shoes who can do the job.”

Smith also was asked about the constraints of being a blunt, forthright commentator working for ESPN, which is owned by the Disney corporate empire.

Click on the illustration for a link to MTSU’s complete 2016 Black History Month event calendar.

“Although that vexes me sometimes, I always say that I would rather work for someone with standards than someone looking for them,” he said.

In addition to praising Bayless for bringing him to the show, Smith cited a number of mentors and colleagues who helped him achieve his current level of success, emphasizing that no one progresses without help from others.

“History says it’s your time, and history mandates that you handle your business the way that you’re supposed to,” Smith said. “Your ancestors didn’t go through all they went through for you to blow it.”

“I think he was very knowledgeable and shared a lot of good information,” said English. “I think that the perspective that he gave was not what people expected, but what people needed.”

ESPN commentator Stephen A. Smith answers a question from the audience Feb. 17 during his keynote address for MTSU’s celebration of Black History Month in the Student Union Ballroom.