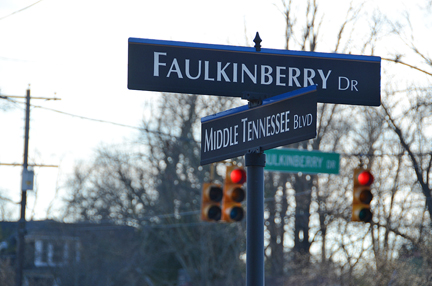 MTSU is hosting a community meeting Thursday, Feb. 18, from 4 to 5 p.m. in the university’s Ingram Conference Center to discuss the Middle Tennessee Boulevard improvement project.

Project consultants will join city and MTSU officials in the conference center, located at 2269 Middle Tennessee Blvd. at the corner of West Lytle Street, to review the planned improvements, which include divided medians with landscaping, new bike lanes and pedestrian crossings, as well as all underground utilities and other upgrades.

Meeting attendees will be able to ask questions and offer comments about the project.

Parking for meeting attendees will be available on the north side of the building by entering the parking lot from Lytle Street. No permit is required for the Feb. 18 community meeting.

MTSU officials continue to encourage students, faculty, staff and visitors to avoid the area when possible, because traffic flow and parking on the west side of campus will be significantly altered during the two-year plus construction process.

Lane shifts have reduced the street to one lane in each direction between East Main Street and Ewing Boulevard, slowing traffic noticeably. Motorists should plan for extra commuting time to and from campus and use alternative access points to campus, including the north (Greenland), south (East Main and Baird) and east (Rutherford) entrances.

The 30-month, $15.7 million project will upgrade the .8-mile section of the thoroughfare between East Main and Greenland Drive. The city of Murfreesboro is overseeing the work.

MTSU officials said they expect at least one lane of traffic will always be open in both directions throughout construction, but access to parking and traffic flow on the roadway will be affected throughout the project.

Pedestrians and motorists are being asked to pay close attention to signs posted along the route, as well as other vehicles and people traveling on foot and by bicycle, to ensure safety.

Completion is expected by Fall 2018. The city will share project updates through an interactive online map at www.murfreesborotn.gov/mtb as well as a new Twitter account, @MTBlvd.

The project will reconstruct the existing four- and five-lane roadway to a consistent four-lane divided street with a landscaped median. It will include bike lanes, improved sidewalks and lighting, new traffic signals, decorative crosswalks, landscaping and underground utilities.

Campus transportation officials are again reminding students that the Raider Xpress shuttle routes are designed to get students to their classes within minutes of boarding from any parking lot on campus, such as the lot off South Rutherford.

The MTSU Mobile app includes real-time tracking of the Raider Xpress shuttles and can be downloaded here. A map of Raider Xpress Blue, Green and Red routes is available here.

When the project is complete, the west side of campus also will be affected in the following ways:

Once finished, the Middle Tennessee Boulevard intersection with Faulkinberry Drive will be “right turn in and right turn out.” Completion is expected by Fall 2018. (MTSU photo by Jimmy Hart)

MTSU will lose part of three tennis courts during construction, which will be supplemented by the use of the new Adams Indoor Tennis Complex, a partnership between the city, MTSU and the nonprofit Christy-Houston Foundation.