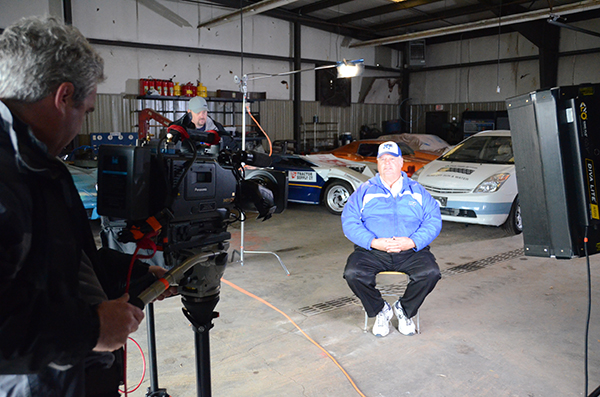 And then the Discovery Channel Canada discovered him.

Freelance video journalists Anthony May and Greg Simmons, who normally work primarily for Great American Country and Country Music Television, respectively, were dispatched March 29 to Mt. Juliet (where Ricketts lives) and to MTSU (where Ricketts works) for a documentary that will be broadcast at a date to be announced.

May and Simmons filmed Ricketts, who completed his cross-country trip on sun and hydrogen from water on March 14, at his 200-acre farm Friday morning. They then drove to the university to complete the coverage.

After May and Simmons set up the lighting and sound in MTSU’s Vocational Agriculture shop just off Lightning Way, Discovery Channel Canada producer Diego Garcia conducted the interview by telephone with Ricketts. Later, May and Simmons added B-roll and campus scenes to complement the interview footage.

Fox, ABC, NBC and CBS affiliates around the country aired footage. Newspapers and radio stations nationwide provided news accounts. Locally, the journey by Ricketts and his seven-member team of engineers and mechanics was chronicled by virtually all newspapers, TV and radio stations.

Ricketts shared with Garcia and the film crew that for his next venture he is considering a drive, using only one car, from Miami, Fla., to Seattle, Wash., and that the “future of fuel” appears to be “nuclear hydrogen.”

Discovery Channel Canada, based out of both Toronto and Ontario, is a specialty network devoted to nature, adventure, science and technology programming. The network is owned by CTV Specialty Television Inc., which includes Bell Media, ESPN and Discovery Communications.