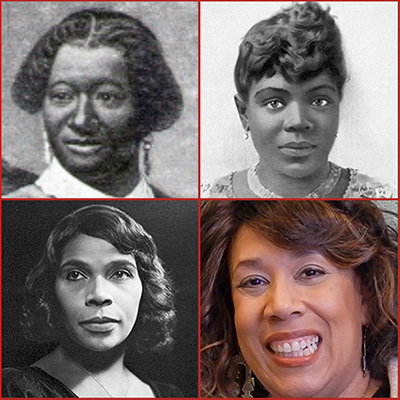 MTSU School of Music vocal professor Dina Cancryn has a new song in her heart for Black History Month: sharing the stories of some of the first classical singers of color.

Cancryn created “Portraits: The First African-American Divas of Song and Opera,” a theatrical production that depicts Elizabeth Taylor-Greenfield, Sissieretta Jones and Marian Anderson sharing their history and their fabulous voices, a decade ago.

Now a special performance of “Portraits,” captured on video, is available for public screenings after its Feb. 1 “premiere” in MTSU’s Wright Music Building.

“Most people don’t know these ladies,” Cancryn explains, a note of surprise in her voice. “They’re just not spoken of. And that’s part of the reason I dedicated this to my daughter, because if it wasn’t for her I wouldn’t have written this.”

Cancryn, a soprano with a lengthy resume of national and international performances, was at home on maternity leave and flipping through videos on TV while her then-infant daughter napped.

Frustrated at the “one-dimensional” aspect of what she saw, and channeling her longtime interest in African-American musicians’ contributions to classical music, she began to write.

“I wrote ‘Portraits’ thinking at the time that I’d love to have something for my newborn daughter to see that, as a people, we are not one-dimensional, and that there are contributions made on a variety of scale and genre,” she says.

“These women are not the first three African-American opera singers, but they are three of the first. I found their stories to be quite compelling.”

The project evolved into a theatrical production that toured for about seven years across the Southeast. When Cancryn received a small grant from MTSU’s Faculty Research and Creative Activity Committee to film the production, another phase of “Portraits” got underway.

“Considering we had a very small budget, for which I’m very grateful indeed, I’m very proud of what we’ve done,” Cancryn says. “James Manning, executive director of Oaklands Mansion, donated use of the mansion and free rein of all the different rooms so that we could film on location there. … I’m very appreciative of that, because it helped to give this a more intimate feel.”

Their weeklong filming schedule took Cancryn, the performers, pianist/vocal coach Joseph Walker and an MTSU crew that included director Ty Whitaker, Jon Jackson, Mitch Pryor, Jordan Kirkman and Aaron Trimbal back in time as they worked at Oaklands and inside Hinton Hall to recreate the performances of these divas and capture them on film.

MTSU alumna Courtney Clark portrays the gifted Greenfield, whose 1851 debut as the first African-American classical singer led to her nickname “The Black Swan,” coined for the lovely tone of her voice as well as her gracious presence.

Cancryn performs as Jones, renowned for her vocal clarity and enunciation as well as her status as the highest-paid African-American performer at her turn-of-the-century career zenith.

Nashville-based vocalist Sonya Sardon portrays contralto Anderson, one of the 20th century’s most celebrated singers who also was lauded for her trailblazing civil rights efforts, including her Easter 1939 Washington Memorial concert and her return for the 1963 March on Washington, where she sang “He’s Got the Whole Word in His Hands.”

The women come together on the screen now as they never could in life, performing an arrangement of the spiritual “Done Made My Vow to the Lord” specially created for Cancryn’s “Portraits” by her School of Music colleague, Grammy-winning musician Dr. Cedric Dent.

“My goal now is to have this disseminated to middle schools and high schools all over the country so that young people can see what these African-American women have contributed to history,” Cancryn says. “There would be no Leontyne Price or Jessye Norman or Denyce Graves without Elizabeth Greenfield.

“I’m not taking anything away from the Beyonces and the Nicki Minajes of this world at all, but I feel like there’s a need for balance, to let young people of any culture or color see that we’re not monolithic as a people. … Our contributions are like an artist’s palette.”

You can watch a preview of the production below. To arrange to screen “Portraits: The First African-American Divas of Song and Opera” at your school or organization, contact Cancryn at dina.cancryn@mtsu.edu.