Star Parties kick off for spri..

African-American journalists are focus of free Feb. 4 screenings at MTSU 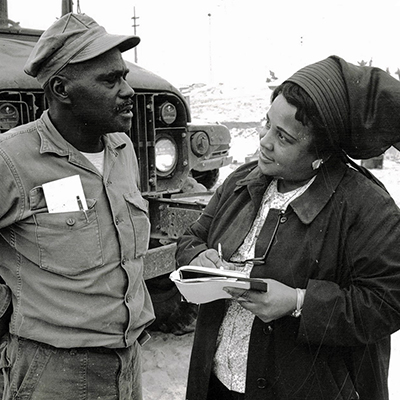 MTSU’s College of Media and Entertainment joins the university’s Black History Month celebration on Thursday, Feb. 4, with a pair of free public screenings of “The Black Press: Soldiers Without Swords,” an award-winning PBS documentary on African-American journalists.

Screenings are set at 1 p.m. and 3 p.m. Feb. 4 in Room 104 of the Bragg Media and Entertainment Building on the east side of campus.

A searchable, printable campus parking map is available at http://tinyurl.com/MTSUParkingMap. Off-campus visitors attending the event should obtain a special one-day permit from MTSU’s Office of Parking and Transportation at www.mtsu.edu/parking/visit.php.

“The Black Press: Soldiers Without Swords” was the first documentary to examine the history and national contributions of African-American newspapers and journalists. Newspapers focused on and run by African-Americans have been publishing in major U.S. cities since the early 1800s, providing detailed records of the lives of black Americans not found anywhere else.

Filmmaker Stanley Nelson discovered the wealth of information in the community newspapers while researching other documentaries on African-American businesswoman Madame C. J. Walker and domestic workers who migrated north after the Civil War.

“I was both excited and overwhelmed by the volume of research materials that laid before me,” Nelson recalled. “I realized then that black newspapers were fascinating in themselves and told their own story.”

Along with the College of Media and Entertainment, these special screenings are sponsored by MTSU’s School of Journalism and the John Seigenthaler Chair of Excellence in First Amendment Studies at MTSU.

The event is part of a yearlong series of special programs celebrating the launch of the renamed College of Media and Entertainment at MTSU. For more information about the college and its programs, visit www.mtsu.edu/media.

American journalist Ethel L. Payne, right, speaks with a soldier in Vietnam, circa 1966. Payne, known as “First Lady of the Black Press,” was a columnist, lecturer and freelance writer who reported on the civil rights movement during the 1950s and 1960s. Serving as a reporter and Washington, D.C., bureau chief for the Chicago Defender, a nationally circulated African-American newspaper, she became the first female African-American commentator employed by a national network when CBS hired her in 1972. Payne’s story is part of the documentary “The Black Press: Soldiers without Swords” set for two screenings Feb. 4 at MTSU. (Photo courtesy of the Moorland-Spingarn Research Center at Howard University)