Innovation ‘charges’ alumnus’ career on ‘MTSU On the Record’ (+VIDEO) 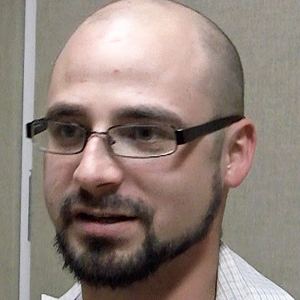 A new MTSU graduate whose invention won third place at this year’s Hackeroo competition in Nashville was a guest on a recent edition of the “MTSU On the Record” radio program.

Host Gina Logue’s interview with Kyle Dobson originally aired June 9 on WMOT-FM (89.5 and www.wmot.org ). You can listen to their conversation here.

Dobson entered his senior electrical technology class project in Hackeroo, a May 10-11 contest aimed at creating new technology for the Bonnaroo Music and Arts Festival. This year’s concert is slated for June 12-15 near Manchester, Tennessee.

For winning third place, Dobson received 30 business augmentation days with FLO {thinkery}, a Nashville-based think tank and business creator founded by entrepreneur Mark Montgomery. Dobson will work with a team there to develop his idea.

The Murfreesboro resident created a bicycle-powered direct current generator that will recharge a cell phone while the cyclist pedals. He created the device at a fraction of the cost of similar items that are commercially mass-produced.

“I’ve always been pretty technically inclined,” Dobson said. “When I was really young, I would take stuff apart and try to put it back together.

“In grade school, I’d sit there and take apart my mechanical pencil just to see what was in it and put it back together.”

New MTSU alumnus Kyle Dobson, the guest on the June 9 edition of “MTSU On the Record,” has created a bicycle-powered direct current generator that will recharge a cell phone while the cyclist pedals. The configuration is shown above.