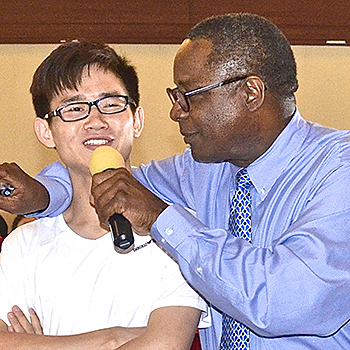 The fruits of MTSU President Sidney A. McPhee’s excursions to China were explored on a recent “MTSU On the Record” radio program.

MTSU President Sidney A. McPhee listens to questions from students at Shanghai Second Polytechnic University after his May 22 lecture on the American higher education system. (MTSU file photo)

An interview McPhee gave to China Radio International while he was in China in mid-May aired June 2 on WMOT-FM (89.5 and www.wmot.org ). You can listen to it here.

In addition to questioning McPhee, the CRI program “Voices from Other Lands” captured audio of his workshop on leadership conducted at Confucius Institute headquarters in Beijing.

“Part of my goal going into the workshop was to be successful in getting them to actually participate, to question me, to give me their thoughts and to be actively engaged,” said McPhee.

To listen to previous “MTSU On the Record” programs, go to the “Audio Clips” archives here and here. You also can learn more about this China excursion at http://mtsunews.com/mtsu-in-china-spr2014, which includes photos and a link to a video.