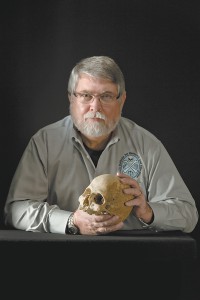 His research goes by titles such as “Common Household Rope and an Outdoor Hanging,” “Cervical Vertebrae Entrapment in the Noose,” and “Evidence of Prehistoric Violent Trauma from a Cave in Middle Tennessee.”

Such scholarly, albeit gruesome, work in the field of trauma has earned MTSU professor Dr. Hugh Berryman a reputation as one of the nation’s foremost forensic anthropologists; Berryman will receive the 2012 award for lifetime achievement in physical anthropology from the American Academy for Forensic Sciences. The T. Dale Stewart Award, given annually to a single recipient, is the highest honor bestowed upon a forensic anthropologist in the United States.

Venerable institutions like the Smithsonian Institution regularly tap Berryman’s expertise on bones and bone trauma. In 2005, the Smithsonian invited him to join an elite scientific research team examining the 9,300-year-old skeleton dubbed “Kennewick Man.” He is also part of the effort to exhume the body of Meriwether Lewis to determine whether his shooting death was a suicide, as originally reported, or murder.

Berryman also provides consultation and regular testing and review for the Joint POW/MIA Accounting Command Central Identification Laboratory in Hawaii, which identifies soldiers from as far back as the Civil War. (It’s one of the world’s most technologically advanced forensic labs.) And since moving to the Nashville area in 2000, he’s made himself available to regional law enforcement and other agencies that deal with death and homicide. As MTSU provost Brad Bartel notes, “Hugh Berryman is probably on speed dial for a lot of counties in Middle Tennessee.”

Certainly the glamorization of forensics on television and in fiction has inflamed student interest across the U.S., but at MTSU, Berryman has turned forensics into a flagship program that benefits students and community alike. It operates as an invaluable regional resource while turning out graduates who are several steps ahead of their competition.

He founded MTSU’s Forensic Institute for Research and Education (FIRE), which offers extensive training for local law enforcement. Last fall, building on the momentum Berryman created, MTSU introduced a bachelor’s-level program in forensic science—the only one in Tennessee, one of only three in the Southeast, and expected to be one of fewer than 20 accredited programs of its kind in the country. Berryman also created FASR, the Forensic Anthropology Search and Recovery Team, to give MTSU students practical experience at the undergraduate level. FASR students accompany and assist him at crime and accident scenes.

“If you can get someone who already has knowledge and understanding of that particular venue, then it makes the training easier and shorter, and it puts that person to work a lot quicker. We’re always looking for that,” Gwyn says.

Bartel says this confluence of talent and opportunity in forensics will give the university national name recognition.

“As a provost, you want all of your programs to be as good as they can be,” Bartel says. “But some, by the nature of the quality faculty you have, and maybe just the uniqueness of the program, rise to a higher level nationally. I view the forensic program as one of those signature, reputational programs for MTSU.”