MTSU to create College of Educ..

MTSU graduate researcher Sara Salisbury may have had a slight edge in a new College of Basic and Applied Sciencesvideo competition.

Pursuing a doctoral degree, Salisbury, who lives in Nashville, Tennessee, had participated in a previous Three-Minute Thesis, or 3MT, challenge — “a de-jargonizer,” she termed it, “condensing hundreds of pages (of research) to three minutes” of down-to-earth explanation to a broader audience. 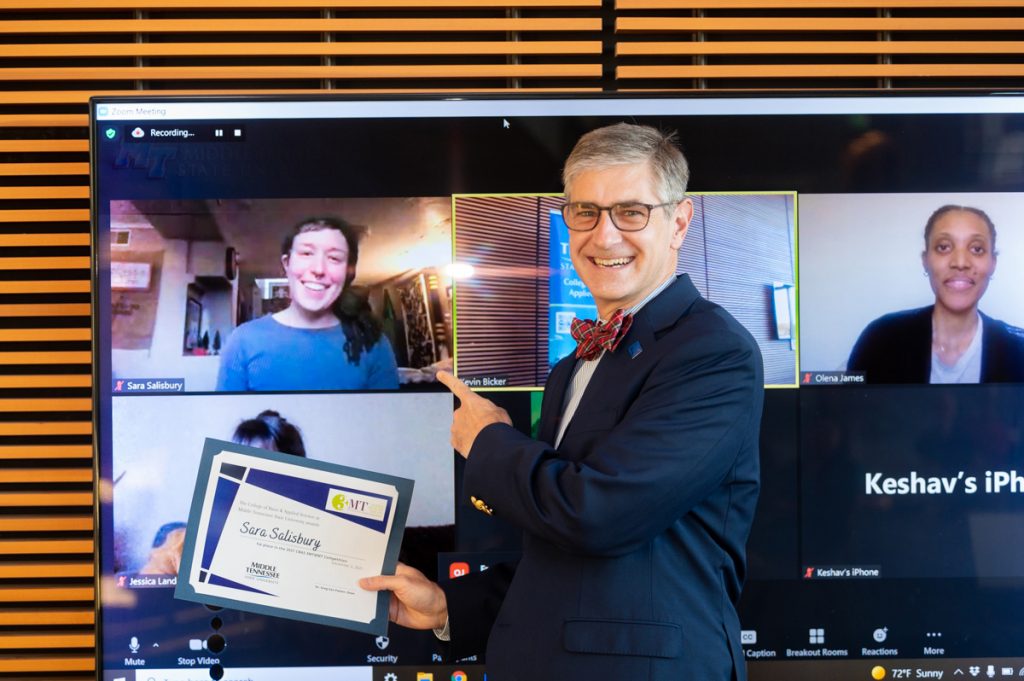 The first College of Basic and Applied Sciences’ 3MT@MT Award Social recently included the awarding of first-, second- and third-place cash prizes. New to MTSU, 3MT started at the University of Queensland in Australia in 2008. More than 200 universities worldwide compete in the official competition open to doctoral students.

Twelve students entered the MTSU competition. Their 3-minute videos can be found here.

Judges awarded Salisbury, a Mathematics and Science Education doctoral candidate, $500 for the “Plant-Based Education” video that took five tries and a full two weeks to record the finished product. 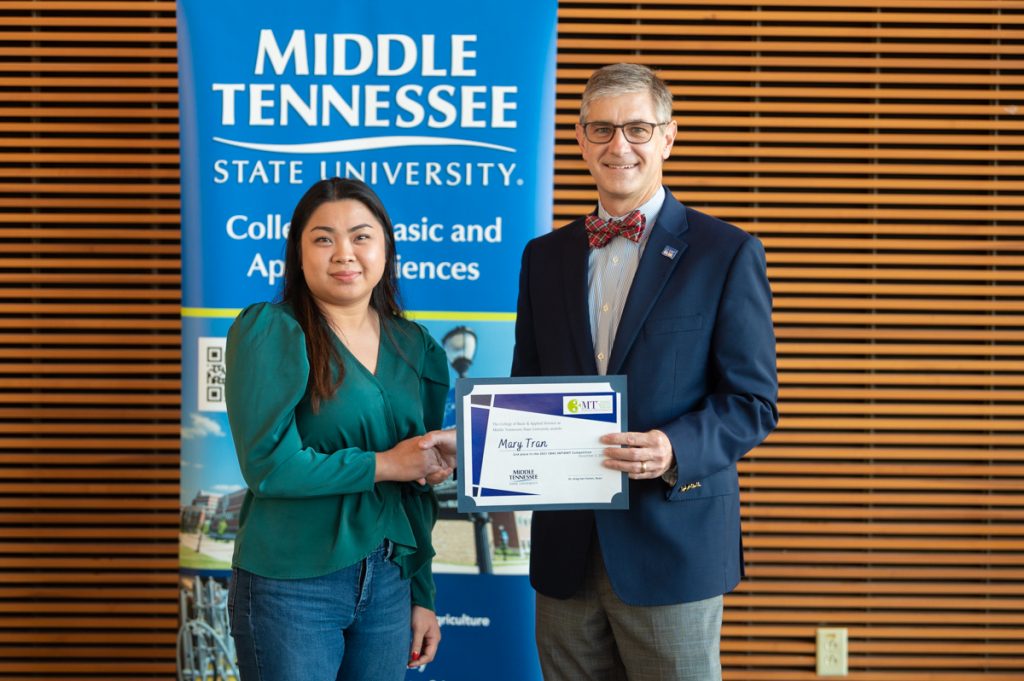 Mary Tran, left, is congratulated by Greg Van Patten, College of Basic and Applied Sciences interim dean. Tran placed second in the 3MT@MT research video competition, and earned $400. It is the first time MTSU has been involved in the Three-Minute Thesis, or 3MT, video event that originated in Australia. (MTSU photo by James Cessna)

“I was surprised (to be first), but the win was super vindicating and empowering,” Salisbury said. “There was a strong pool of candidates — a boost to my confidence and reinforced my research (K-12 science education). Science education is important … and universal.”

Assistant professor Seth Jones in the College of Education’s Womack Education Leadership program said his research assistant “is a huge asset to our project with our (out-of-state) partner school, and the video was great.”

Salisbury said the researchers’ video efforts are “to make clear science is understandable and approachable — having that tool helps.” Andrea Ellis, who created her “Science Teacher Leaders” video, called it “a great experience to condense a 40-page research paper to three minutes and not use academic language.”

Chemistry doctoral candidates Mary Tran ($400) and Kevin Cavey ($300) finished second and third, respectively. Both are in the molecular bioscience program.

“It was difficult at first to be precise and then share all the information I wanted to say,” Tran said. “It was a good learning lesson. Now I can go to chemistry seminars and explain it.”

This exercise develops presentation, research and academic communication skills and supports the development of research students’ capacity to explain their work effectively.

“This has the potential to grow even more beyond our college,” Van Patten said to the attending audience. “We now have beautiful videos to share your research around the college and community. Thank you for sharing your research.” 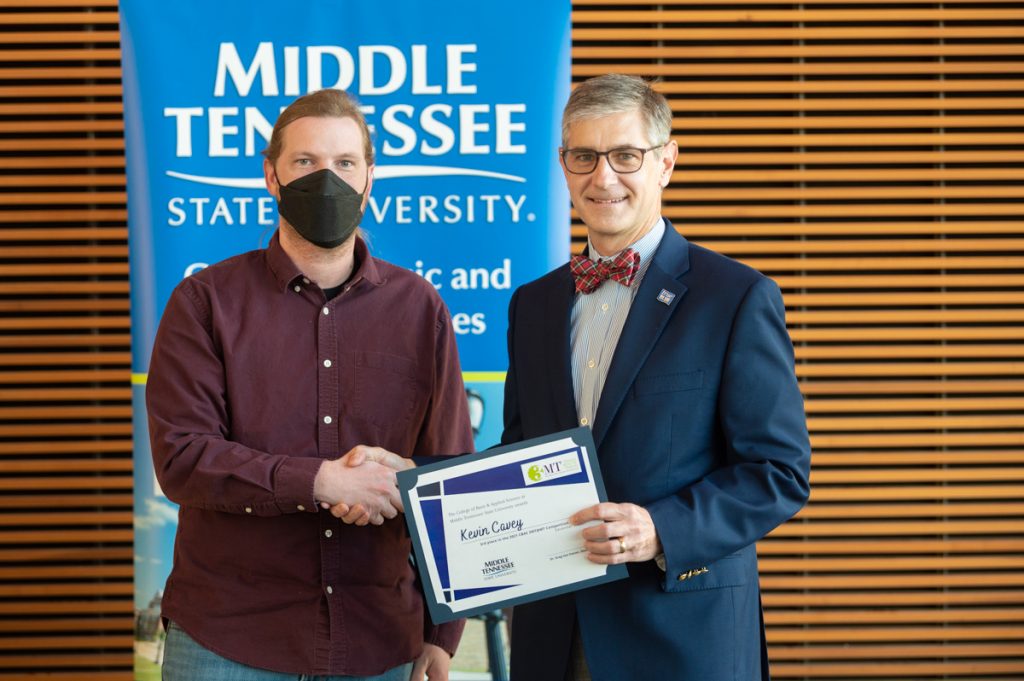 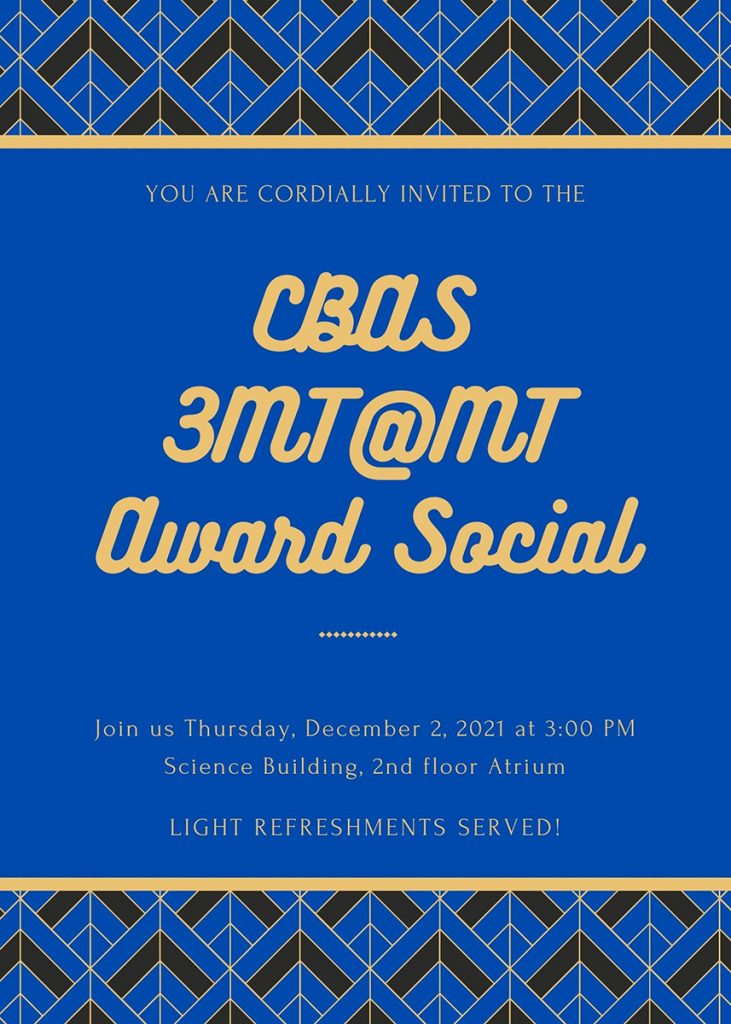