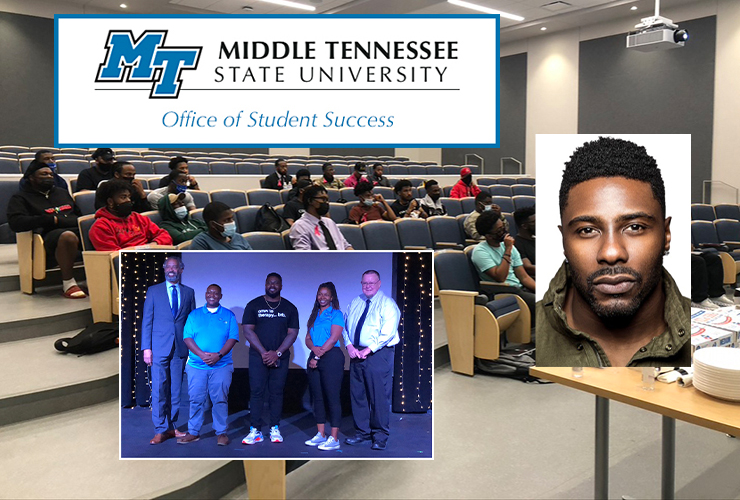 As the fall 2021 semester wraps up, MTSU’s Office of Student Success hopes to help improve graduation and persistence rates among the university’s Black male students through a lecture series aimed at developing their individual identities and deepening their engagement in campus life.

The Black Male Lecture Series was launched a few years ago to address the sometimes unique challenges faced by this population of students by hosting a variety of Black career professionals to expose students to possible career paths and networking. 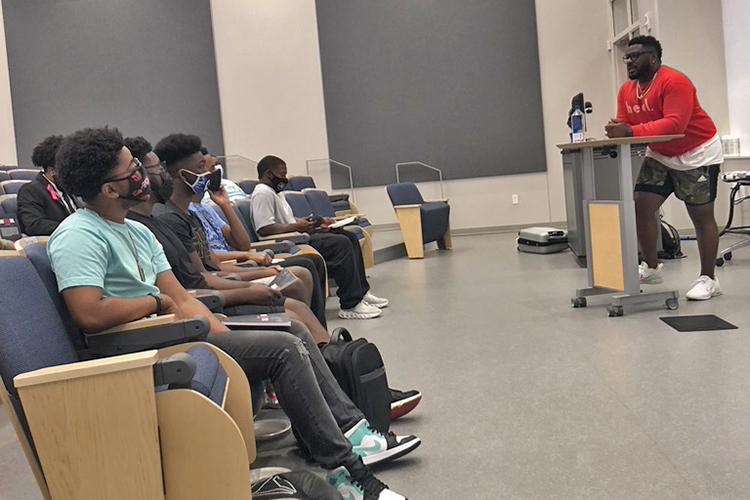 Jay Barnett, an author, speaker, family therapist and mental health coach, speaks to MTSU students participating in the 2021-22 Black Male Lecture Series during an October session in the Academic Classroom Building. The series is sponsored by the Office of Student Success and aims to improve the graduation and retention rates of Black male students on campus. (Submitted photo)

Former NFL player Jay Barnett, an author, speaker, family therapist and mental health coach, has been the featured speaker this fall and is hosting a total of eight sessions (most virtually) with the 25 participating students. The fifth session was held Monday, Dec. 6, and the program wraps up in February.

“He meets with the students via bi-weekly Zoom to talk to them about different issues that their facing – self-esteem, resentment, abandonment, health masculinity,” said Travis Strattion, assistant manager of the Scholars Academy, and coordinator of the series. “Recently we talked about emotional intelligence, and ultimately making sure you’re doing everything you can for your well-being, your mental health, so that you can focus on your academics and graduating.

“This is an issue that we wanted to focus on.”

Barnett gave a keynote address in August to Scholars Academy participants and their parents at Keathley University Center. Scholars Academy, along with the Student Transition and Academic Readiness Program, or STAR, is a freshman year experience opportunity designed to enhance student learning and success through academic, social and long-term support. 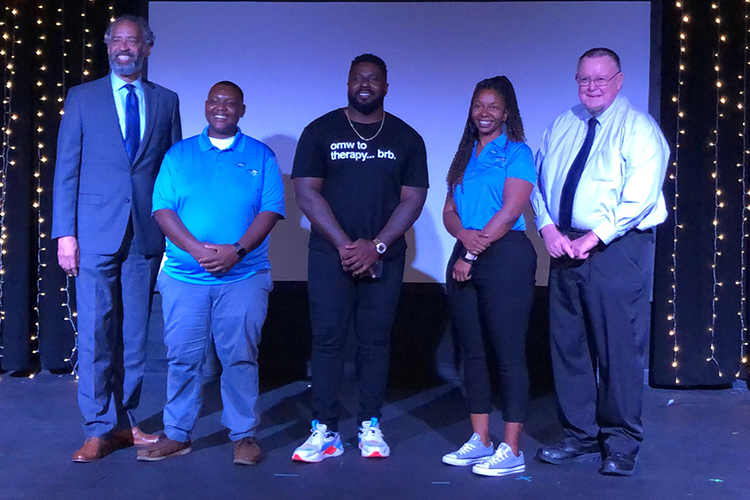 ‘Allows them to unpack’

The students who went on to commit to this year’s Black Males Lecture Series program have been journaling as a part of Barnett’s K.I.N.G. program, which stands for Kindling Innovation Necessary for Growth. The program’s curriculum includes group discussions, two books (“Hello King” and “Just Heal, Bro”), as well as assignments.

“The students have definitely received it well,” Strattion said. “These sessions are deep, and it’s a place where students can be vulnerable and have a safe space. It allows them to unpack; it allows them to unleash and to talk about various things that are hindering their growth and progression.”

Senior commercial songwriting major Joshua Gray of St. Louis said the series “was eye-opening” because of its focus on an area that hasn’t always been at the forefront of discussions surrounding his peer group.

“When it comes to mental health, that’s not something that’s as discussed in the Black community, especially among Black men. And to see a Black male therapist was amazing,” said Gray, who plans to pursue a master’s in social work or psychology in hopes of becoming a therapist like Barnett.

“The other barrier that was being broken was men being in touch with their emotions. Just acknowledging that something is going on with me and figuring out what can I do about it instead of trying to run from it, hide it or suppress it.”

The series started in 2019 with a goal to retain, graduate and assist more Black males with identity development while providing a space for Black males to find a sense of belonging on campus and in the community.

Brelinda Johnson, manager of the Scholars Academy, developed the vision for the series and worked with Vincent Windrow, associate vice provost for Student Success, on identifying potential speakers for the series.

“I wanted to give the students an opportunity to be exposed to what success looks like,” said Johnson, who has connected with student groups such as the Collegiate 100 to recruit participants. “Thinking about motivation, I wanted to find ways to keep them engaged in college, making them aware of more than just the couple of careers that most people consider.” 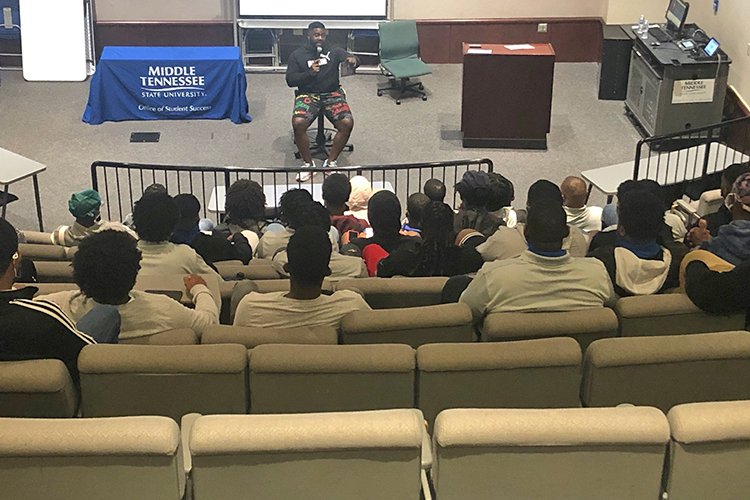 Jay Barnett, author, speaker, family therapist and mental health coach, speaks to MTSU students participating in the 2021-22 Black Male Lecture Series during the series kickoff in August at the Business and Aerospace Building’s State Farm Lecture Hall. The series is sponsored by the Office of Student Success. (Submitted photo)

Strattion noted that even outside of the stresses of the pandemic, mental health and wellness has been a growing area of focus within higher education as educators recognize the unique pressures that today’s college students face. Barnett’s focus on this area made him a perfect fit for the lecture series this fall.

“One of the things we’ve focused on with the students is not hiding your brilliance, which adds to your empowerment as an individual,” he said. “It reinforces this idea that you matter, and that you can do whatever you want in terms of leading and reaching your full potential.”

For Gray, that potential manifested in a successful run to become the 2021 Homecoming king. And as president of the Collegiate 100 Black Men of MTSU student group and a peer mentor for the Scholars Academy, he has continued to stay engaged in the campus community as he moves closer to a Spring 2022 graduation.

“Sometimes you just have to go with the tools you already have, and the tools that you need will come after you take that first step of faith,” he said.

And sometimes that first step is the simplest one.

For more information about the Black Male Lecture Series through the Office of Student Success, contact Strattion at Travis.Strattion@mtsu.edu.