John Hood is the quintessential public servant who is fond of saying that “service is the rent we pay for the space we occupy on earth.”

Hood’s rent is more than paid in full — he’s served more hours of community service than most of us have been alive. At 90, Hood should be marketing for Timex. We all know he “keeps on ticking” because everywhere we go, there is John Hood! 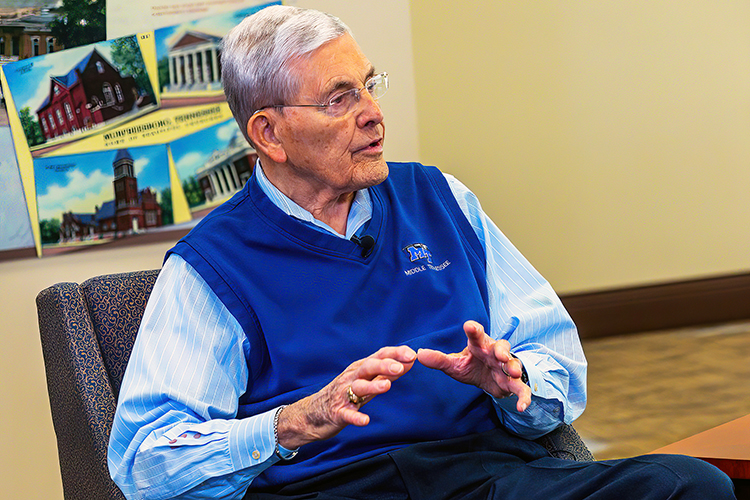 MTSU alumnus and director John Hood discusses his life, career and legacy on the final CityTV “Storytellers” program in the MTSU Room at the Rutherford County Chamber of Commerce after serving as host for 10 years. (City of Murfreesboro photo)

The MTSU alumnus of many hats — director of the university’s government and community affairs, former legislator, marketer, personnel director, broadcaster, and U.S. Army veteran — is the guest on the final episode of “Storytellers,” the television interview program he hosted for 10 years.

Viewers can watch the farewell show on CityTV and at the bottom of this story. The final “Storytellers” premiered Monday, Dec. 6, at 8:30 a.m. and airs throughout the month on CityTV.

Hood devoted decades of service to Murfreesboro and Rutherford County where he was born in 1931, educated in Murfreesboro schools (Central High Class of ’49), worked and raised a family. He only left Middle Tennessee to serve his country in the U.S. Army at Fort Knox and Fort Devens from 1954 to 1956. Hood began his career in radio journalism for Murfreesboro’s WGNS Radio in 1948, working as a staff announcer until 1954. In 1956, after a stint in military service, he worked for WMTS, another local radio station, until 1960.

“My father bought me a P-A amplifier and a microphone and a speaker,” Hood recalled. “I would do the play-by-play of the ballgames going on vacant lots. That’s how I got started initially in being in broadcasting and radio. It was my early interest in radio and in broadcasting.”

“I got married to a lovely lady by the name of Marilyn Stockard who became my wife of 65 years. We enjoyed each other and had a good family and was very much a part of the community,” said Hood in the final Storytellers episode. “On June 6, 1954, I graduated from Middle Tennessee State College.  On June 11th, we had our first child, Gary Warren Hood, and on July 21 I was on a Greyhound bus headed for Fort Knox, Kentucky, and two years in the U.S. Army.”

Hood graduated from MTSU with a degree in social science and later earned his master’s degree in education. Known to many as “Mr. MTSU,” Hood served as director of development in the Office of Community Engagement and Support for Middle Tennessee State University and assistant to the president. In 1976 he was honored as a Distinguished Alumnus.

Hood’s public service began with the Murfreesboro City School Board from 1967 to 1983 and the County Quarterly Court, now the County Commission, from 1968 to 1978.  Hood represented the 48th District in the Tennessee House of Representatives from 1998 to 2008. 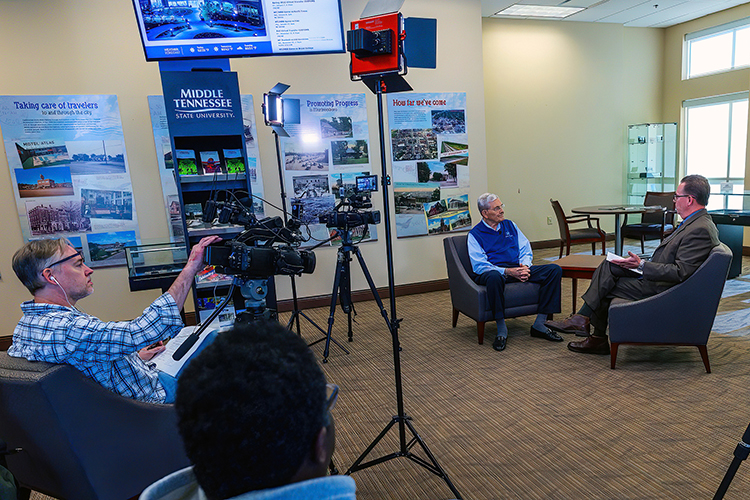 MTSU alumnus and director John Hood discusses his life, career and legacy on the final CityTV “Storytellers” program in the MTSU Room at the Rutherford County Chamber of Commerce after serving as host for 10 years. At far right interviewing Hood is Mike Browning, Murfreesboro PIO and also an alumnus. (City of Murfreesboro photo)

“To me, it gave me another opportunity to be of service. It was something I had thought in the back of my mind all my life.  My father was a Sergeant-at-Arms for the (Tennessee) House of Representatives,” said Hood. “He would bring me back a copy of the Tennessee Bluebook and I always enjoyed looking at that. Never would I have thought that one day my picture and my bio would be in there too.”

“I’m just honored to have that to happen,” he said. 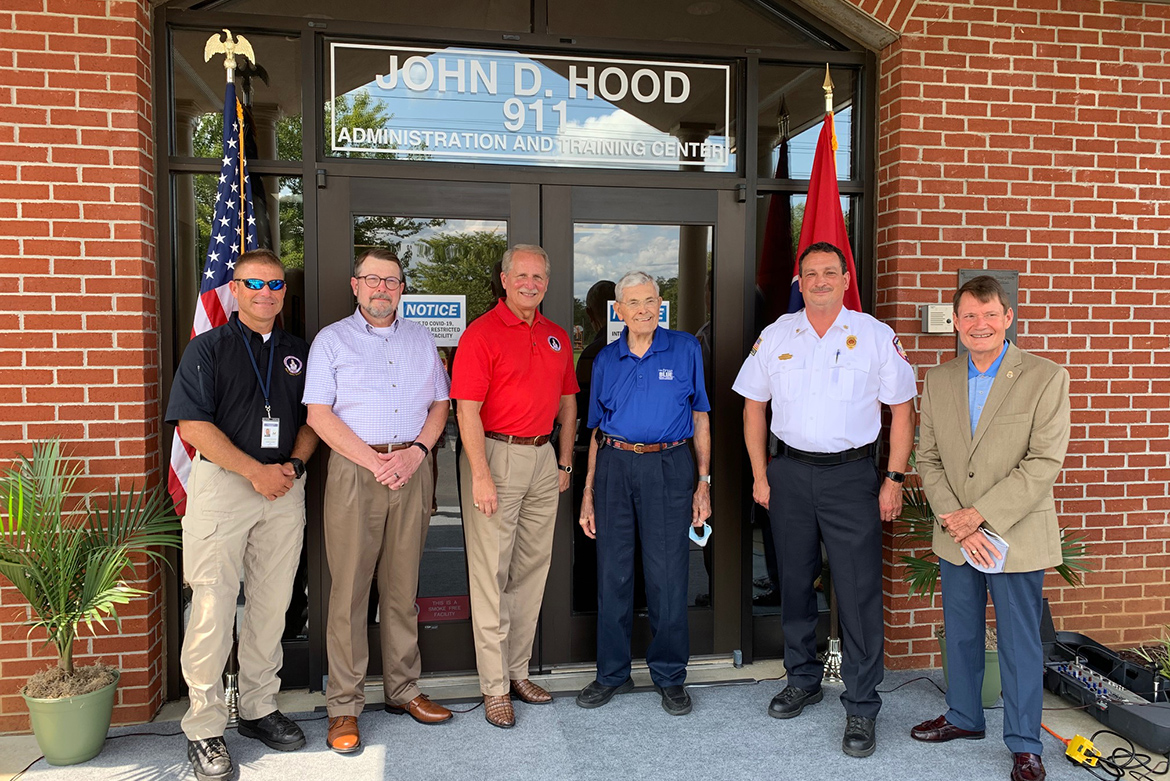 Hood’s private sector service also includes 20 years as vice president of marketing for SunTrust Bank and six years as personnel manager for Samsonite Corp., 1960-1966. The Rutherford County Chamber of Commerce honored Hood as recipient of its 2018 Doug Young Lifetime Achievement Award for his service. In 2014, the chamber honored Hood as its Business Legend of the Year. As a diplomat, he has attended hundreds of ribbon cuttings and groundbreakings.

“I’ve been part of that group for about 26 years,” Hood proudly remembered. “It’s a real pleasure to go out and meet the new people coming into the community, learn about their new businesses and be able to spread the word about them. One year we had 128 ribbon cuttings and groundbreakings.”

Among his many other recognitions, include:

As one fellow public servant stated, “John Hood sets the bar really high.”  A family man, community advocate and public servant, his story is most worthy of “Storytellers.” As for how he would like to be remembered, Hood always turns back to service.

“That I tried to give back to the community. To compensate for the life I’ve had, for the many privileges I’ve had, the many opportunities, the many successes I’ve had, and many friends I’ve enjoyed knowing over the years.”

The final “Storytellers with John Hood,” produced by Michael Nevills and hosted by Mike Browning, is airing on CityTV every day at 8:30 a.m. and 6:30 p.m. throughout the month of December. Murfreesboro CityTV can be found on Comcast Channel 3 and 1094, Roku, Amazon Fire TV, Apple TV, YouTube, and the City website www.murfreesborotn.gov/citytv.