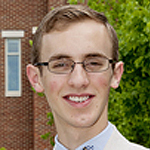 After first being “shocked” by the news, MTSU sophomore Jordan Dodson said he became “very honored, humbled and thankful” to learn he had been named a recipient of a Goldwater Scholar Award.

Peggy Goldwater Clay, chair of the board of trustees of the Barry M. Goldwater Scholarship and Excellence in Education Foundation and daughter of the late U.S. senator from Arizona, announced the 2012 recipients in late March. Two hundred and eighty-two sophomores and juniors at colleges and universities nationwide received the honor.

Dodson, 20, who has a 3.97 GPA as a double major in professional chemistry and professional mathematics and a minor in biology, received a two-year, $15,000 Goldwater Scholarship.

“This is a pretty significant award,” said Dodson, a Murfreesboro native and 2010 Oakland High School graduate. “I’m so thankful for the great people in the Honors College who help students. They are very supportive and a great joy to be with.

Dodson studies an average of nine hours a day and performs his research in his room at home. He said the $7,500 he’ll receive annually from the Goldwater Scholarship will be in addition to the Hope Lottery, Merit Scholarship and biology and chemistry scholarships he already receives.

“I always say, ‘School is my job,’” Dodson said. “My tuition is already paid. I’m making similar to what somebody with a part-time job and in college would make. With the Goldwater, you can’t have a job that interferes with your studies. They want you to focus on your academic work.”

“When his curiosity leads him to hypotheses that cannot be conveniently tested with conventional resources, Jordan seeks out other research methods to accomplish the same goal,” MacDougall continued.

“In addition to his intellectual and scientific abilities, Jordan has great people skills that enable him to work well with others. When students, faculty, staff or administrators meet Jordan, they always say, ‘What a great guy!’”

Dodson recently traveled to the Symposium on Molecular Structure and Dynamics in Dallas, where his poster on “A Computational Investigation of the Anomeric Effect and the Generalized Anomeric Effect” received high praise from university scholars. Many assumed he was a graduating senior, Honors College Dean Dr. John Vile said.

When he’s not studying, Dodson said, he also enjoys golf. He played at Oakland, where he shot in the 70s and has a low handicap. He also briefly led the Rubik’s Cube Solving Club. He loves to play chess, is known for his bow ties and sport coats and is engaged to Brittany Robertini, a junior biology major at MTSU.

Dodson, the son of Dewey and Linda Dodson of Murfreesboro, joins a growing list of Goldwater Scholars. Evan Matthew Craig, a sophomore Buchanan Fellow from Arlington, Tenn., who is majoring in biology and received a Goldwater in 2011, has a second year of support, Vile said.

The Goldwater Foundation is a federally endowed agency established by public law in 1986. It was designed to encourage outstanding students to pursue careers in mathematics, the natural sciences and engineering. Since its establishment, the foundation has bestowed more than 6,200 scholarships worth $39 million.

MTSU’s scholarships are coordinated through Laura Clippard in the Undergraduate Fellowship Office in the Honors College.