Leaders needed for ‘Yes I Can’.. 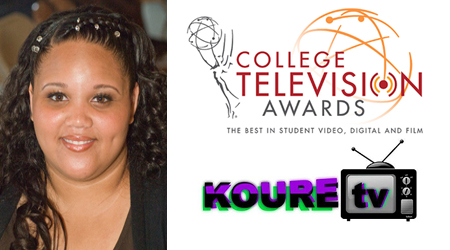 For the first time in the University’s history, an MTSU student has won a national College Television Award from the Academy of Arts and Science Foundation. That student is senior Erica Doyle, producer of Koure TV, a documentary-meets-magazine-style show that airs on MT10.

There, Erica Doyle received a silver trophy and $1,000 for her second-place win in the “Best Magazine-Style Show” category for a segment of her show called “Ordinary People Doing Extraordinary Things:  Koure TV Pushing Boundaries.”

“For television programming, there is no higher authority than the TV Academy, and this award is at the national level,” says Billy Pittard, chair of MTSU’s Department of Electronic Media Communication.

According to the Television Academy Foundation, more than 600 students from 154 schools across the country entered the competition this year. Out of those, only 23 projects were chosen for awards at the event.

Doyle says the University of Southern California project that beat MTSU had a staff of 50 people, while the third-place winners had a staff of 70. Though Koure TV has a large cast and crew, Doyle’s project, had a staff of only three: Doyle, her husband and host  Patterson.

The winning MTSU segment featured two local businesses, Jeff’s Family Restaurant and EmbroiderMe, and an MTSU student organization, Zeta Phi Beta. The segment investigated the business owners’ backgrounds and discussed what it takes to build a business in those industries. The story on Zeta Phi Beta followed the group as they practiced and participated in a step show and performed community service.

Doyle says the show, which she and Marquee founded in 2009, started off “quirky” and without a strict focus. She realized last summer, she says, that she wanted to “turn the show around and make it something that was worthy of people wanting to tune in.”

“I just decided to figure out what is important to students and what is important to the community,” she says, adding that viewers have compared it to the 1990s Fox Network sketch comedy show “In Living Color,” but with a “cool, young spin.” She describes the show as “hip and real nowadays.”

“We would use the space to have meetings, but we did a lot of field production, so we were never on-set in the studio to actually do filming, and the equipment that we used was always borrowed by crew members.”

The entire show was shot with one DSLR camera, a small microphone and only available outdoor lighting. All video editing was done in Doyle’s home studio.

Doyle, who majors in mass communication and media management and minors in speech and theatre, encourages other students to not let a lack of resources or other hurdles keep them from developing their ideas.

“I know sometimes you may not have the opportunity to work with some of the broadcasts at MT10, but don’t be discouraged, because you may have the opportunity next year, and in the meantime, you can build from yourself, from just the things that you do, and create your own show. And MT10 welcomes that.”

Adds Pittard: “Erica showed us what’s possible when you take full advantage of the resources we offer our students.”

MTSU EMC Professor Bobby Dowd served as unofficial advisor on the project, encouraging Doyle and her crew along the way while still “letting us do our thing,” as Doyle puts it.

While in Hollywood for the awards, Doyle was able to network with big names in the industry, such as Mark-Paul Gosselaar, one of the ceremony’s hosts and an actor from TNT’S “Franklin and Bash” and the 1989-1993 “Saved by the Bell” NBC teen sitcom; Academy Award winner Geena Davis of “The Accidental Tourist,” “Thelma and Louise” and “Beetlejuice” fame; and the CW Network’s “Hart of Dixie” star Cress Williams.

Doyle says she plans to continue to broaden her contacts in the industry after she graduates from MTSU May 5, admitting that networking is the most difficult part of succeeding in the television and film industry.

“Everybody’s afraid of networking, but you just have to suck it in, pull it up, and go do it,” she says.

As a recent alumna of the T-Howard Foundation, which works to promote diversity in multimedia, Doyle will gain further contacts; the foundation helps young minorities break in to the industry. In fact, Doyle had an internship through T-Howard with Scott Weiss, a former executive vice-president for Turner Broadcasting.

“I want to give thanks to the crew and cast of Koure TV for their extremely hard work, to MTSU’s College of Mass Communication for their support and the classes they offer that teach us how to do these things, and to the Academy of Television Arts and Sciences,” Doyle says.