In MTSU’s Dance program, experiential learning is the backbone of both the creative and educational processes. “We like to say that practice is research, and research is practice,” said Meg Brooker, assistant professor in the Department of Theatre and Dance. “We encourage traditional research such as going to the library, writing papers, and conducting interviews, but we also practice embodied research, where we’re putting ourselves into an experimental space and reflecting on what that experience is like.”

“This past May, we were invited by the Peoples’ Friendship University in Moscow to perform at the school’s Isadora Duncan festival,” said Brooker, who accompanied the three students she selected for the trip. “We performed original Isadora Duncan repertory, part of the work that I learned while dancing with a New York company that inherited these works.”

With only three slots available for the trip, MTSU’s student dancers had to demonstrate their skill in order to earn their place. “The students audition for the experience,” Brooker explained. “They turn in a written application and then complete a performance audition. Due to the audition process, they represent our University not only as students, but also as dance performers.” 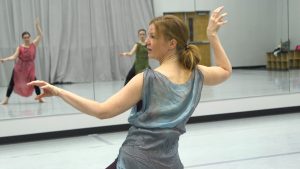 MTSU dancer Savannah Cook was one of the three students selected for the trip. “In preparation for the festival, my peers and I came together to learn five Isadora Duncan dances,” she said. “That week and a half [of practice] was a dream in itself. We would come in every morning and just dance for up to five hours, learning this beautiful choreography that has been passed down.”

This is the third year MTSU has been extended an invitation to dance at the festival by Peoples’ Friendship University, which provides Brooker and her students with dormitory housing. MTSU is the only American school invited to perform “and usually the only non-Russian school,” Brooker added.

MTSU’s exclusive invitation is the result of Brooker’s specialization in Duncan’s dance method as well as her eagerness to foster relations between the two universities. “I’ve known the Peoples’ Friendship University dance director, Valentina Ryazanova, for about 15 years,” Brooker said. “She knows that I have this repertory of historic Isadora Duncan dance. Coincidentally, I started teaching at MTSU the same year that her university launched their festival, so she reached out to me and specifically requested that I bring these dances to her university through my students.”

Both Brooker and Ryazanova hope that the invitation can be reciprocated one day. “Her hope is for our universities to develop an ongoing relationship and international exchange,” Brooker noted. “She directs a folk dance ensemble called Rhythms of Friendship, which performs folk dances from all over Russia, and I’m hoping to eventually be able to host her folk dance company at MTSU.”

Both universities share the common interests of the cultural exchange and historic preservation of dance, two vital areas of study in the dance community. “In MTSU’s program, we study dance as a cultural artifact, and we learn about preserving and passing on historic dance legacies like Isadora Duncan’s,” Brooker said. “It’s very exciting to me for our students to be able to learn this historic repertory that represents the very beginning of modern dance.” 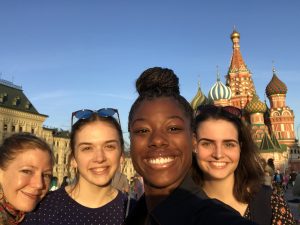 For Brooker and her students, language barriers proved only a minor issue—the creative expression of dance was a universal dialect. In describing the performances with other students at the Peoples’ Friendship University, Cook said, “Most of us didn’t speak the same language, but when we danced, we all seemed to understand. It was not a competition, but an exchange of movement. The dances were challenging, of course, but it felt as though we all got lost enjoying and appreciating what Isadora started.”

Appreciation for Duncan’s work united not only the dancers, but also the audience, bridging culture and age gaps in an unforgettable exchange.

“After our show ended, an older lady came up to me and started speaking to me in Russian,” Cook said. “I don’t know exactly what she said, and never will, but I could tell she was complimenting me, and I felt as though I could understand her just by her facial expressions. It made my heart soar. I will never forget that moment.”

The community of dancers and scholars dedicated to preserving Duncan’s work opened a pathway for MTSU students to experience her influence thousands of miles from home. Duncan, who traveled and performed all over the world, founded a school in Russia in the early 1920s, according to Brooker. “Because of her history and influence in Russia, I’ve had a lot of opportunities in my professional work to travel over there to perform and teach, and I’ve learned the city of Moscow very well,” the MTSU faculty member said. “It’s exciting for me to be able to share the city with my students. I get to introduce them to Russian culture: I take them to see performances at the historic Bolshoi theater and to see some avant-garde contemporary dance performances. I want them to get an idea of both the history of dance in Moscow as well as what’s currently happening in that city.”

Duncan’s distinct dance method is noted for bridging the gap between historic, classical dances forms and modern dance techniques. In Brooker’s personal experience, the discovery of Duncan’s freeform movement provided a unique outlet for her artistic expression. “During my time as a professional dancer in New York City, I was searching for the embodiment of what I wanted to express creatively,” she said. “I began researching Isadora Duncan as an example of an artist who created her own technique, her own method of moving the body in order to generate her own dances.” 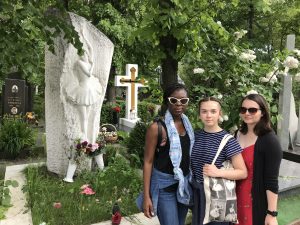 Brooker’s study of Duncan led her to inquire about the preservation of the dancer’s work. “During my research, I began wondering whether anyone had preserved her movement, whether it had survived over time,” she said. “I found a dancer named Lori Belilove, the artistic director of the Isadora Duncan Dance Foundation in New York. One day I took off work to go experience a Duncan technique class, and that was it for me. The movement felt like what I wanted to be expressing.”

She never looked back, dedicating herself to the study and preservation of Duncan’s work. “I studied with Lori and started dancing as an apprentice with the company. I became very immersed in that very specific movement practice,” Brooker said. “I did a lot of teaching and performing in New York, and then I realized that I wanted to research Duncan’s work from a scholarly perspective, so I went to graduate school to get my M.F.A. Since then, I’ve been very involved in organizing an international community of Isadora Duncan dancers.”

Brooker is the founder of the Isadora Duncan International Symposium, uniting practitioners of Duncan’s method from around the world. In August, the fourth biennial symposium will take place in London, and an MTSU dance alum also will be presenting. “Much like our Russian trip, I love finding ways for students to be involved in my work and research in Duncan’s method if it’s something that interests them, and to help them build contacts within the community,” Brooker said. “That kind of mentorship doesn’t stop upon graduation.”