Middle Tennessee State University and The American University of Kurdistan are teaming up to create a new international partnership, allowing students to take classes at both institutions to reach their educational goals.

Representatives for the universities signed a memorandum of understanding this week on the AUK campus in Duhok in the Kurdistan Region of Iraq. With it, AUK and MTSU students can take classes and complete their bachelor’s degrees at either campus.

Credits that students earn at MTSU and AUK under the plan will transfer seamlessly between the institutions.

“The signing of this MOU will not only be a student exchange; it will also be a cultural exchange between both universities,” Numan said. “MTSU is a reputable university in the United States, and it’s well-known overseas for the variety of its programs. We are happy to partner with them as AUK.”

“We’re excited about our new partnership with AUK,” MTSU Provost Mark Byrnes said. “This is a unique opportunity for both our students and theirs, and we expect it to pay big dividends.”

The new agreement also reflects MTSU’s role in serving the educational needs of the United States’ largest Kurdish community, located in nearby Nashville.

“For Kurdish students in the U.S., this will be a great opportunity to return to Kurdistan for part of their college education to reinforce their connections to Kurdistan, while for non-Kurdish students, it will be a great opportunity to learn about Kurdistan and its cultures, languages, etc., in an American-style academic setting that is safe, secure, and teaches to U.S. standards,” said Michael McClellan, director of educational advancement for The American University of Kurdistan. 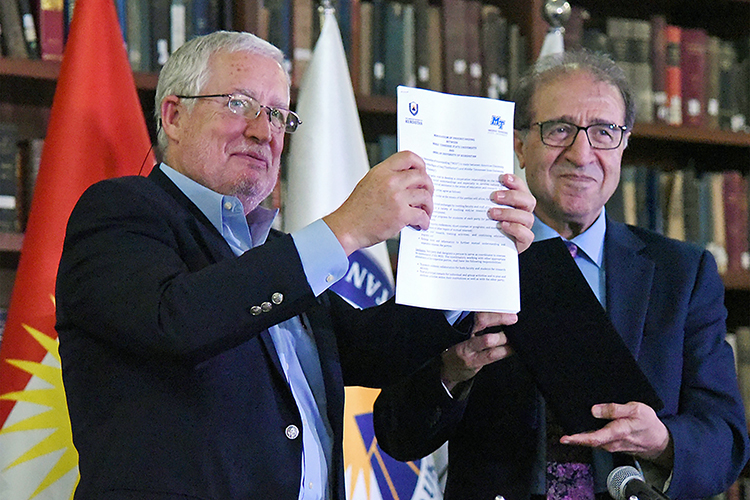 Dr. Peter Cunningham, left, MTSU vice provost for academic programs, joins American University of Kurdistan Provost Nazar Numan in smiling at the assembled crowd’s reaction Thursday, July 25, after the universities announced a new international partnership that will allow students to take classes at both institutions to reach their educational goals. Officials formalized the memorandum of understanding between the universities on the AUK campus in Duhok in the Kurdistan Region of Iraq. (Photo courtesy of the American University of Kurdistan)

MTSU is the first of four U.S. universities joining AUK in its goal of creating educational partnerships for all its departments and colleges, giving both AUK and partner-school students the opportunity to study abroad with top programs and professors worldwide. Also in the works are AUK pacts with the University of Houston, Wayne State University and the University at Buffalo.

MTSU now has more than 40 educational partnerships with universities in 20 countries around the globe, including institutions in China, France, Iraq, Japan, Mongolia, Russia and Scotland. An agreement finalized last month with Kenya’s Moi University allows MTSU and MU’s aerospace departments to collaborate on teaching, research and student exchanges in their respective pilot training programs.

The American University of Kurdistan is located in Duhok, the capital of the Duhok Governate in the Kurdistan Region of Iraq. It’s about 45 miles north of Mosul, Iraq, and roughly the same distance from the country’s northwest border with Turkey.

AUK, founded in 2014, currently has about 430 students enrolled in its five colleges: Arts and Sciences, Business, Engineering, International Studies, and Nursing. More information about AUK is available at its website: http://auk.edu.krd.

MTSU, founded in 1911, has an enrollment of more than 21,500 students, including almost 1,000 international students, in its nine colleges: Basic and Applied Sciences, Behavioral and Health Sciences, Business, Education, Graduate Studies, Liberal Arts, Media and Entertainment, the University College and the University Honors College.

More information about MTSU and its 140-plus academic programs is available at www.mtsu.edu.