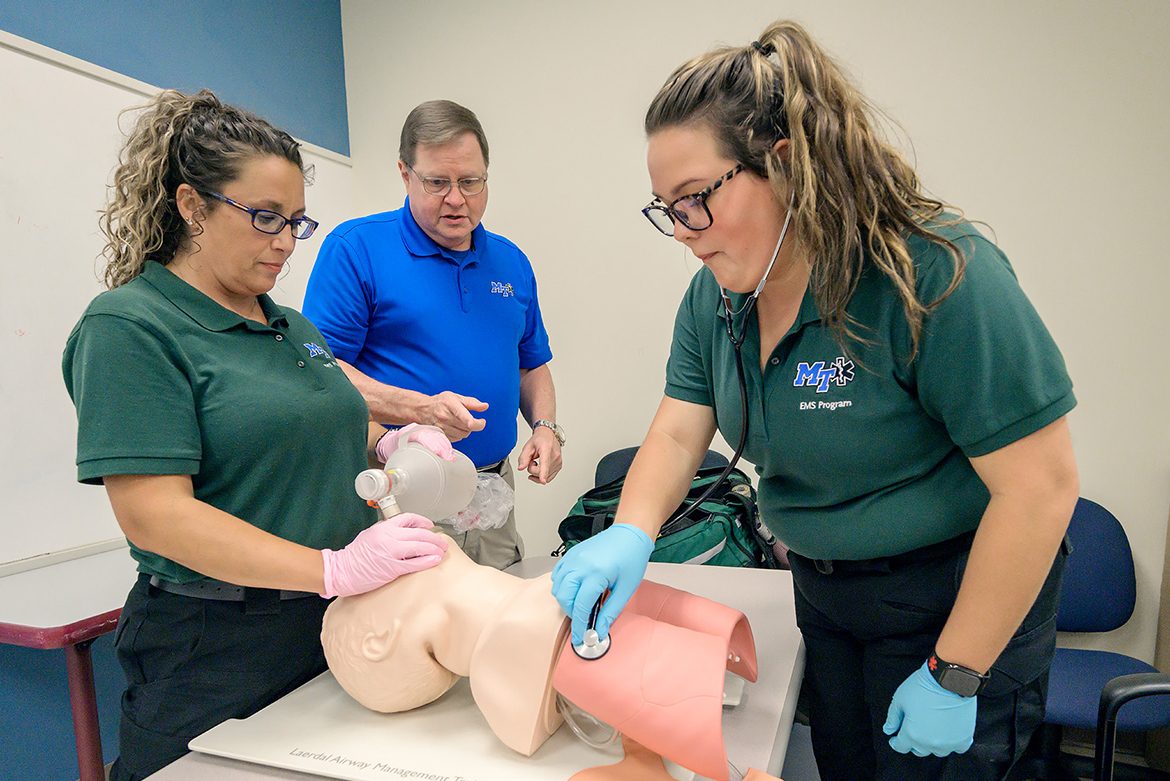 Throughout the 40 years of its existence, the MTSU EMT program has certified more than 1,000 emergency medical technicians, many of whom are still working in the industry today.

Randy White leads the course and has done so since 1982. He started out working with the ambulance service in 1980 when he was 20 years old and says after that experience he never wanted to do anything else.

“I jumped in the ambulance for a ‘ride-along,’ and I remember the very first call,” said White, now 61. “There was a wreck on Warrior Drive in south Murfreesboro. We did not have to transport anyone, but just being out there and being able to help was tremendous to me.” 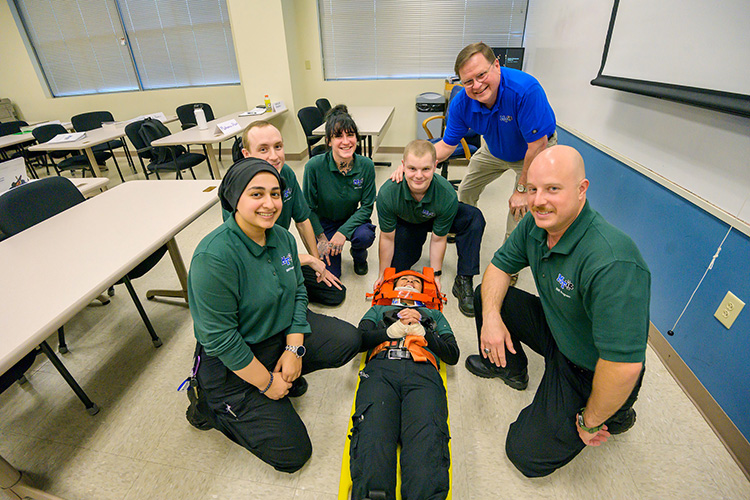 He’s been an instructor since then, partnering with Dwight Stone to lead the basic EMT training course as well as an advanced EMT course through University College’s Professional Development Program. The pair started teaching one class a year and certifying about 20 students but now they lead two basic EMT classes and certify about 35.

White says he enjoys leading the classes today as much as he did when he started.

“Sometimes I get carried away because I want to teach them everything in one class,” he said jokingly. “I can be tough on the students sometimes, but if they can get by me they can get by day-to-day.”

He said his goal is to graduate qualified EMTs or not graduate anyone at all.

“We believe a person is qualified when we trust them to work on our parents, our spouses, and our children.”

‘It was intimidating … but everyone was so supportive’

Chrissy Worrell, an advanced EMT with Rutherford County EMS, said the classes were tough, recalling asking her daughter for study tips after not having aced one of her tests.

“My daughter is 21 and I am 43 and I had never really experienced a college-type course,” Worrell said. “It was intimidating and I had some self-doubt, but everyone was so supportive.” 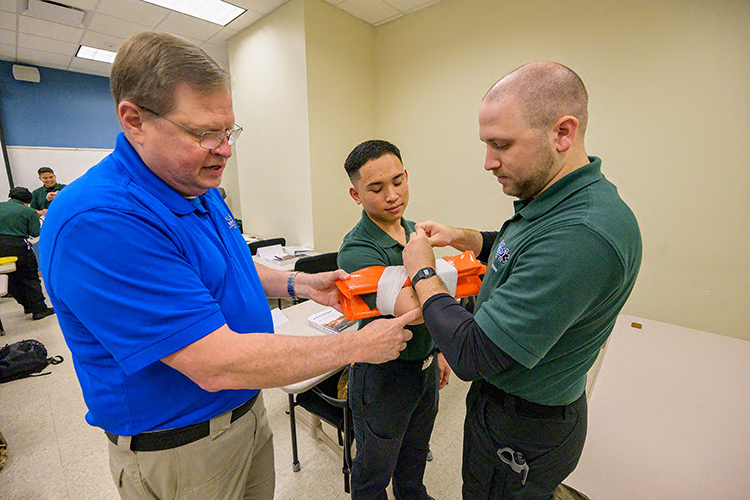 Worrell says White and Stone were hard on her and her fellow students, but looking back she is so grateful for the experience she had in the class.

“He would raise his voice and put pressure on you when you were trying to hold a seal during CPR, but when I got in the field I found that the pressure he was putting on me in class translated directly to what I was doing in an ambulance.”

Worrell said she has always wanted to be an EMT and help people. After the course, she is even more sure about her decision to embark on a new journey.

“The more I dove into it and learned, the more I wanted to do the best I could,” she said. “I also wanted to make Randy (White) proud.”

In a letter to MTSU administrators about White’s impact on her career, Worrell recalled an instance when his teaching helped her during a critical moment on the job. She wrote:

I recently had a patient that had shortness of breath. When we arrived, I saw this man in severe respiratory distress….I wanted to be nervous but, at that moment, I remembered in class you made us seal the BVM (Bag-Valve-Mask) mask using a specific technique and bag the patient for 30 minutes straight. If the seal leaked — we started over! My hand hurt so bad, I was shaking, my legs were tired and frankly, I was frustrated having to start the exercise again. But, all I could focus on was your words — from the patient’s room, transporting to the ambulance, while en route, and through those ER doors was — I better have a tight seal and I better be giving my best effort to help save this man’s life.

I can only hope that my fellow classmates took to heart the passion you have for sharing your experience, expertise, and wisdom in EMS. 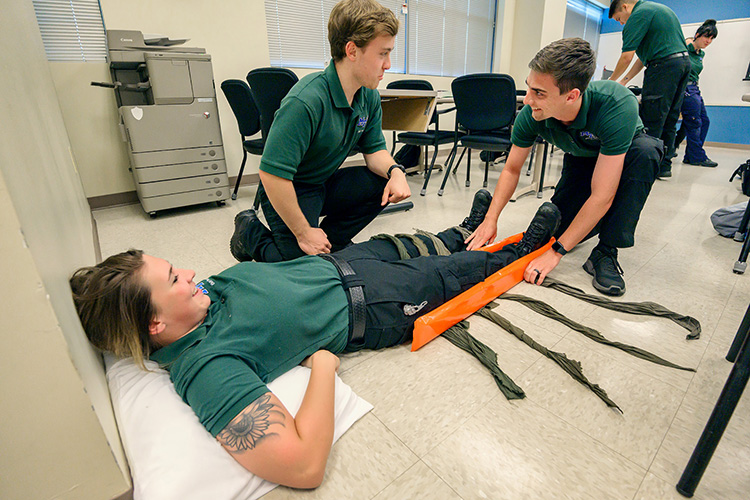 White says he expects his students to share his level of passion if they want to become good EMTs.

“A course like this takes time and a certain level of dedication,” he said. “The course is designed for those who really want it.”

He can say that because he overhauled the course in 2014 with Eve Shockley, MTSU’s professional development coordinator. The pair wrote their own curriculum based on the National Association of Emergency Medical Technicians. The old program was handled by the Tennessee Department of Transportation.

“There are national objectives that are recommended, and we incorporated those into the course we wrote,” White said. “The state inspects the program routinely and recently the state EMS director wanted to give it to other schools to jumpstart their programs.”

White humbly said they were pretty happy about that distinction.

All types of students

Worrell said she was the “mama bear” of her class, and White says he usually has a classroom mom or dad every year.

Right now, White has students in his class ranging from age 20 to 50.

White tells his students that they’ll use what they learn at home just as much as they do on the job. That’s what motivates some of his older students to sign up.

“We get a lot of retirees who just want the knowledge,” he said. “I specifically remember two 70-year-olds who wanted to be certified before going on a mission trip.”

White tells his students at the end, of course, he hopes they feel what he felt 40 years ago — that certain feeling when the sirens are blaring, off to assist a stranger on one of their worst days. He wants his students to take pride in what they do, and “do things not only because we can, but because we want to.”

If you are interested in learning more about the course, visit mtsu.edu/emt.

The next EMT course will begin in Fall 2022. The EMT classes at MTSU meet two nights a week for 7 1/2 months; either Monday and Wednesday evenings or Tuesday and Thursday evenings from 6-9 p.m. on scheduled lecture nights. On practical lab skills training nights, the classes meet from 6-10 p.m. To take the advanced EMT course, you must have successfully passed an approved EMT course and provide a passing grade for the National Registry EMT exam or already be a licensed EMT in the state of Tennessee. 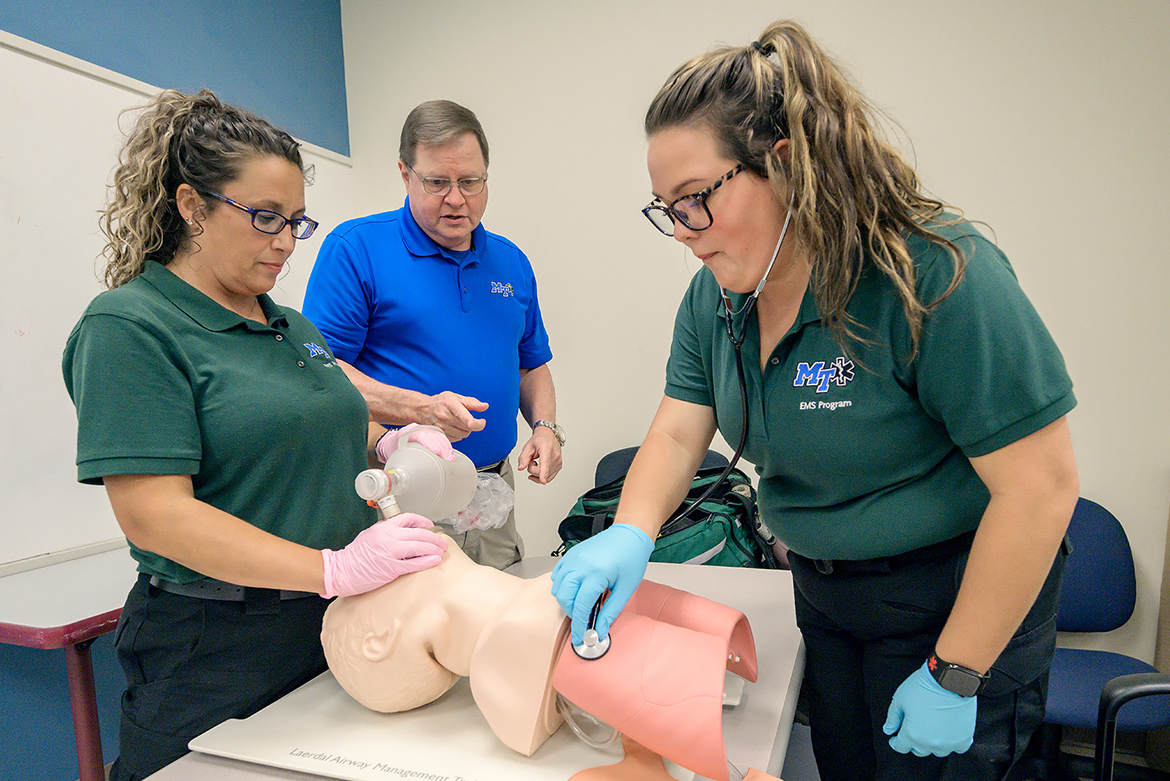