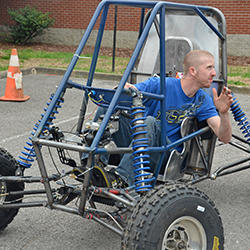 Captain Daniel Denham and the rest of the MTSU Baja SAE team believe their vehicle is primed and ready for the judges and the other nearly 100 competitors in the Auburn Society of Automotive Engineers Collegiate Design Series regional in Alabama.

“We’ll be ready to compete by the time we leave campus,” said Denham, a junior aerospace technologies major from Franklin, Tennessee. “I think we stand a good chance of doing pretty well.”

After being up until 2 a.m. performing final tweaks to the vehicle, the MTSU squad left Murfreesboro at 6 a.m. Thursday, April 9, heading for Auburn University and a scheduled 2 p.m. sales presentation to start the event, which continues through Sunday, April 12. For the complete schedule and more, visit http://bajasaeauburn.com/.

In what could be called ultimate engineering, Baja Society of Automotive Engineers, or SAE, competitors drive out of textbook theory by designing, building and testing the performance of an actual open-air, off-road vehicle featuring roll bars.

Except for the April 9 sales presentation on the Auburn campus, the competition will be held at the National Center for Asphalt Technology in Opelika, Alabama.

Denham said the team effort “has been impressive. We’ve had quite a few sleepless nights and a lot of blisters, busted knuckles and smashed fingernails.”

He and Jeremy Posey, engineering technology graduate assistant and Experimental Vehicles Program student leader, designed and began building the Baja in September 2014. The two-man operation gained momentum during winter break as more students joined the mission at the prompting of Beau Hallavant, who assists Posey.

“It was a big relief when Beau rearranged the effort with manpower so it would give us more hands on the Baja,” Denham said. “Some of us put in 60 and 70 hours a week into it. Over the break, everyone was here eight to 10 hours a day.”

The entire frame, body, all the electrical and mechanical aspects were fabricated and assembled on campus in Voorhies Engineering Technology facilities.

As for the sales presentation, Denham said it takes place “to show them (judges) why they would want to buy it.”

Professor Saeed Foroudastan, associate dean in the College of Basic and Applied Sciences, serves as the program’s faculty mentor.