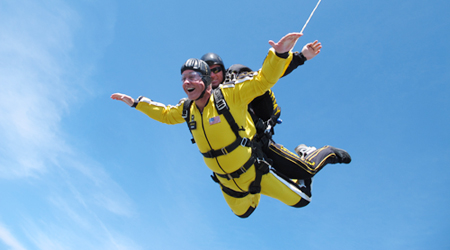 Dr. Steven Estes and Sgt. 1st Class John Ewald, a paratrooper from the U.S. Army Golden Knights, sail toward their landing spot on the Fort Knox, Ky., campus during their June 14 tandem parachute jump over the post. Ewald and Estes pose for a post-landing photo at left. (photos submitted)

Since their inception 53 years ago, the Golden Knights have performed in more than 16,000 shows in all 50 states and 48 foreign nations, breaking 348 world records. The team conducts more than 850 tandem jumps each year.

Some of the more celebrated individuals to jump with the Golden Knights include actor/comedian Bill Murray, Ann Curry of NBC’s “Today Show” and former President George H. W. Bush, who took the plunge on June 12, 2009, to celebrate his 85th birthday.

Estes jumped simultaneously with an Army paratrooper, who pulled Estes’ ripcord in addition to his own.

“I’m absolutely sure that he’s going to get it right, because his life is on the line just as much as mine is,” Estes said before the big jump.

While Estes had never before jumped out of an airplane, he is intimately acquainted with military leadership exercises. He completed a 26-mile march with Army ROTC personnel a year ago, and his score on the Army Physical Fitness Test is in the top range for his age group.

Civilians volunteer and then are nominated for the honor of jumping with the Golden Knights, but the Army chooses only 15, said Mark Boylan, recruiting operations and training specialist with the 7th Brigade at Fort Knox.

“This is one of the great ways the Army has of getting closer to the people it serves to try to make them all champions and strong supporters and dispel misconceptions about ROTC,” Boylan said.

“His department assisted our Ranger Challenge Team that was invited to the Sandhurst Competition at West Point in April,” said Kast. “They performed specific tests on the entire team to help tweak their physical performance, and Dr. Estes traveled with the team to West Point for the competition.”

The professor, who teaches leader-development courses at the doctoral level, saoid he hopes to return to MTSU with more life lessons that will translate into classroom performance.

“By studying them, I’ll try to extract … best-practice principles so that I can bring them back to the university and put them in place in all of the things that I do,” said Estes.